When Victoria Cates moved to St. Louis from New York last year, her plan was to launch a fashion business using her embroidery skills — her first great adventure.

In the process, Cates, 30, met Dorothy Jones, owner of Bespoke, a made-to-measure clothing boutique on the corner of Ohio and Cherokee. Jones, 60, was at a different stage in her life's journey. After 30-plus years of traveling from coast to coast, bouncing around the theatrical costume shops on Broadway and running her own corset-making business in San Francisco and Rhode Island, Jones and her husband Mark Nevelow had moved to St. Louis in 2005. Opening the shop last November was, she says, their last great adventure.


For Jones, Bespoke represented a chance at real creativity after years of making patterns for other manufacturers. Each piece of clothing is custom-fit for each client — something that's generally only true of the priciest couture fashion. “I started doing custom clothing again because the corsets were boring. Ultimately it’s the same thing over and over again,” she says. “To do a sample, to do a prototype, to do the costing, to do the pattern that could go to a factory—that service isn’t really available here, and I just accidentally ended up here with it. I just realized I’d rather do it for myself."

In pursuit of that dream, in 2014, Jones and Nevelow acquired the space for the store on Cherokee. The couple spent a year and a half renovating the building. (They were, Nevelow say, “completely and totally deranged” for taking it on.) But despite starting with a basement full of dead pigeons and a hole through the roof, Bespoke now has all the charm and character that you might expect from a niche shop in the city's artsiest district.

It only looks like an upscale boutique, though, in the front. Just beyond the display of finished products is Jones' workshop, where everything is still very much in progress. The space is consumed by four long tables, all cluttered with scraps of fabric, rulers, sewing machines and spools of thread. Long rolls of sample fabric hang along the walls, along with collages made from fashion magazine clippings. Half-finished garments are pinned onto the dressmakers sporadically arranged around the workshop. It’s in this space where Jones and her two other workers hand-make affordable and customizable couture for their customers.

See also: A Look Inside Bespoke When costumers come into the shop, they can peruse the basic shapes and patterns on offer, which Bespoke can make in sizes up to 20. “There are people everywhere who have no ability to walk into a store and buy something that fits and looks good. Very few people are fit model size,” says Jones. No matter the size you wear, she emphasizes, you deserve fashion.

Once customers see something they like, they can have it adjusted to their desired fit. But unlike at a regular tailor, the customer can then take on the role of designer: adding a collar, sleeves, a neckline—whatever they’d like. “We’re not designers. We’re engineers. We make good shapes and our customers are designers,” says Nevelow. “In a way it’s like the opposite of fashion. The fashion industry is about people dreaming up what you should wear, and we don’t.”

It wasn’t long after Jones and Nevelow opened their doors in November 2015 that Cates walked in looking for a job. She was looking for something to support herself while figuring out her place in the fashion industry. In New York, she'd done beadwork for a company doing couture accessories. “Through the process of working for them I started to love hand embroidering,” Cates says. “I thought I was going to end up being a designer in a corporate, [computer-aided design] work and type of design, and I just couldn’t stand the thought of it.” After Cates helped her sister and a friend move to St. Louis to start their own boutique, she was inspired to stay. “There is so much creative energy here and it’s not what I expected,” she says. “The people I met were so encouraging and open-minded to what new things could be brought in here, and so I felt like that’s exactly where I need to be right now.”  When Cates met Jones, the connection was instant. “We sort of just geeked out over everything," Cates says. "We have the same interests and values about fashion.”  In Cates, Jones saw a talent that reminded her of her work back in the costume shops in New York. It’s the kind of craft that you can’t find in the U.S. anymore, Jones says. “She walks in the door with this skill, this miraculous skill that I might not see again, and I’m like, 'I don’t care what happens, let’s find a way to work together.’"

That sentiment has become a fashion line, which the women plan to release at a show at Bespoke on April 29. The event is called Amare Elementorum, and the theme is a cabinet of curiosities. It will be a casual reception with wine, cookies and a playlist to set the celebratory mood.  The collection is a mixture of different styles for women: it features both upscale evening wear and simple linen dresses embellished with a splash of color from Cates’ embroidery. Dresses, separates, and even a jumpsuit are part of the mix.

All of the pieces incorporate an embroidered piece inspired by their theme: vibrant beadings of sea slugs, a coral reef formation and whatever other creatures Jones and Cates imagine crawling around in the ocean's depths. 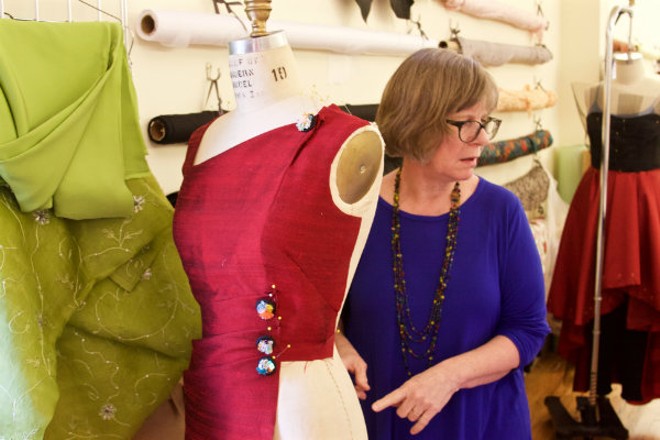 During a recent morning at the shop, one of the dresses for the show is draped on a dummy, pinned up in its incomplete state. The dress is made from rich, red silk dupioni, which Jones sources from a mill in India. The neckline of the sleeveless gown cuts diagonally across the chest, and that diagonal movement is repeated again in the midriff where it’s been pleated three times. The pleats are fixed with beaded buttons, each fashioned with a colorful sequence and beads made to look like coral reefs. The buttons hold up portions of the dress, making the embroidery integral to the dress’ design. It's a beautiful piece.
Cates calls the show their runway collection, without a runway. At the show, the pieces will be displayed on dummies, reinforcing the idea that this kind of couture is not just for stick-thin models.

The idea is to show the extent of what they could do for customers, and then tone it down and make it wearable. Magnifying glasses will be on hand so that guests can get an even closer look at the intricate beadwork.
The collaboration between Jones and Cates will be ongoing. They both want to spend the rest of their respective adventures making something one-of-a-kind for each customer that comes through the door.  “People have forgotten that clothing can be very precious because it has become a commodity. It’s an object that comes out of the box as it is, and it was made by them over there,” Jones says. “But you put it on your body and it reflects who you are, and people make judgments about you based on what that is. It’s actually a very intimate part of you and a really lovely way to express something, if you can get something that’s yours. It’s not that hard, it’s just that people have forgotten that they can do it.”

And from an unlikely spot smackdab in the middle of flyover country, the two designers are making a beautifully embroidered argument that you can do just that.

“I love St. Louis. It is such an easy town to take a chance in. It’s the best thing about it because you’re not hauling all of the overhead of the coasts on your back,” says Jones. “You can financially make it work here and it’s such a welcoming community.

"If you’ve got a weird idea, they’re like, ‘Really? Can we come sit next to you? Can we do it with you?’ We’ve been here 11 years now, but obviously now that we own this beast, this is where we’re staying.”

See also: A Look Inside Bespoke