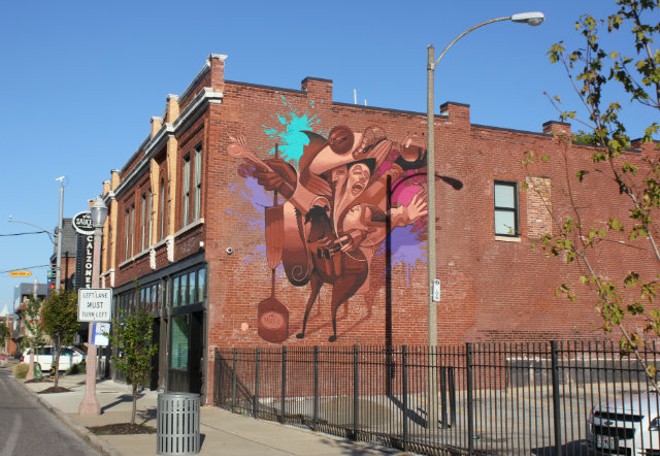 In July, a new mural was unveiled in the Grove. The painting, created by artist Phil Jarvis, depicts two figures melded and twisted together with an assortment of food-related objects—a handful of silverware, a wine glass and a wooden pizza peel. On first glance, it appears to be a tribute to its occupant of one year, the calzone restaurant Sauce on the Side.

Normally, a food mural might not be controversial. But the problem for some St. Louis residents is less about what the new art shows and more about what it replaces.

The "St. Louis Wall of Fame" was originally painted in 2011 by youth members of the Herbert Hoover Boys & Girls Club under the guidance of local artist Grace McCammond. The memorable yellow-and-amber painting depicted some of St. Louis’ most celebrated black artists and historical figures—from Tina Turner, Miles Davis and Nelly to Katherine Dunham, Jackie Joyner-Kersee and Dred Scott. The mural was a local favorite for many black St. Louisans, and was one of the few public tributes devoted to St. Louis’ black cultural, social and political history.

The mural was removed in October 2015. But published poet and author Justin Phillip Reed says it wasn't until he saw its replacement that he realized what had been lost in its removal.

"That Sauce on the Side obliterated the Grove's mural of notable Black artists with footholds in St. Louis ... and replaced it with a (racially) ambiguous, self-branded one finally sank into me today—like a blade, in that it felt particularly violent and aimed," he wrote in a public post on Facebook. “I thought I'd imagined this erasure at first—I'm still not sure I haven't imagined it, I keep looking for the wall of Black folks and thinking I'm just tired and losing it exactly the way colonialism would have me thinking, no?"

Then he called out Restoration St. Louis, the company that owns the building. "It's interesting," Reed wrote, "that Restoration St. Louis endorses this, seems so excited about the new art, seems to have had no question as to whether the St. Louis Wall of Fame ... could have been, idk, restored? How unabashedly developers and businesses strive to anti-Blacken this district." 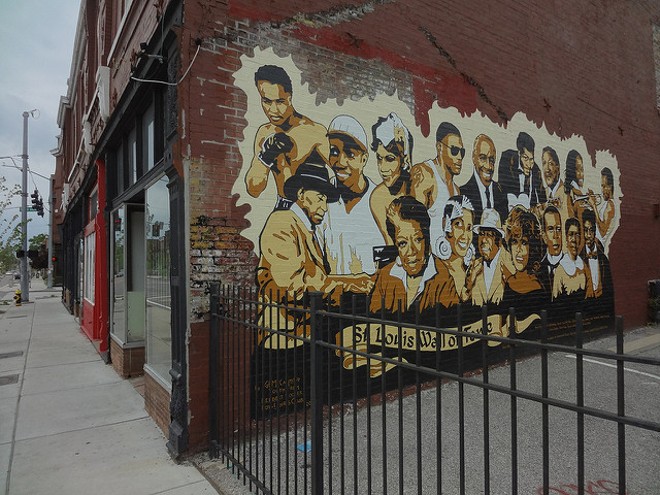 Over the last decade, the neighborhood previously known as Forest Park Southeast has evolved into the Grove—an LGTBQ-friendly enclave known for its bustling nightlife and eclectic young crowd. Like several neighborhoods in St. Louis city, The Grove has become a target for various redevelopment and revitalization projects. With its new destination status, however, housing prices have soared—and many black residents have been displaced.

Restoration St. Louis has been a part of revitalization efforts. Its founders, Amy and Amrit Gill, specialize in historical renovations, working to rehabilitate “architecturally significant residential and commercial properties with a significant emphasis on creating neighborhoods.” Since its founding in 2001, Restoration St. Louis has completed more than $400 million in restoration projects on roughly 400 different properties. In the Grove, the Gills own O'Shay's Pub, and are embarking on a 55-unit apartment complex on Manchester Avenue.

They also own the building on the northeastern corner of Tower Grove and Manchester, home of "the St. Louis Wall of Fame." Previously vacant, it now counts Sauce on the Side as its tenant.

In an email, Amrit Gill says the building had been in “horrible” condition, requiring more extensive work than previously planned. In addition to fully removing and rebuilding the front and rear façades, Restoration STL discovered that both of the building’s side façades would need more detailed brick repair. The problem? The building’s eastern-facing wall was home to “the St. Louis Wall of Fame.”

Restoration St. Louis had two options, Gill explains: move forward with the brickwork, which involved a grinding process that would leave the image seriously damaged and defaced—or complete the brickwork after removing the mural entirely. The company chose the latter. 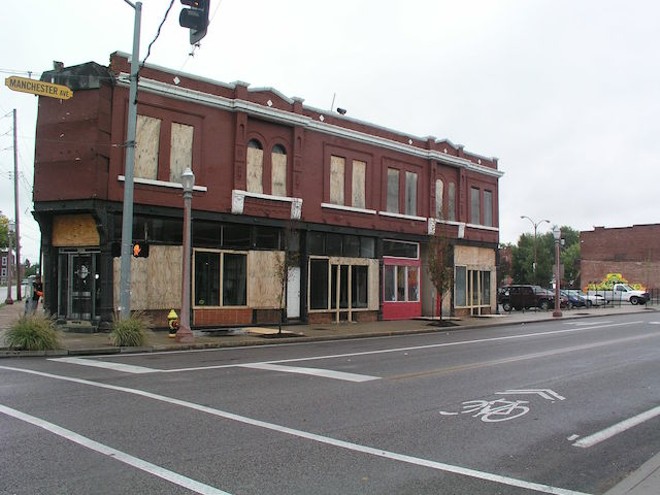 “We had every intention to keep both that mural and the other mural on the [other] side of the building,” Gill says in an email. “With historic restorations, however, you never truly know what you’re going to come across until you start opening walls. We felt that [defacing the mural] would be more disrespectful and disturbing than removing [it].”

But for some onlookers, the removal of the commemorative mural, replaced with an image that doesn’t provide the same contextual or historic value, represents a pattern of urban renewal in historically black communities that displaces or erases the racialized history of the space. From the razing of St. Louis’ Mill Creek Valley in the late 1950s, to the rapid gentrification of black neighborhoods in communities like Oakland, California and Brooklyn, New York, to the plainly apparent demographic transformation of the Delmar Loop in recent years, the merits of city development projects have been a hotly contested, racialized subject for decades. Removing a mural is certainly not the same thing, but for some residents, it has a similarly disempowering sting.

“You have art that’s public art, and you have art that’s simply taking up public space,” explains local sculptor and multimedia artist Kahlil Irving. “Public art is something that engages the specific environment that it’s in. Phil Jarvis isn’t paying attention to what or who or where his art is displayed, or the cultural context in which the work is being seen.”

Amy Gill says Restoration STL has been saddened by the controversy around the mural. Of the company's rehabilitation work, Amrit Gill explains further, “We have always tried to only buy the worst 10 percent of a neighborhood which are usually vacant properties, like this building. By only targeting vacant structures we do not displace any existing cultural diversity in the neighborhood and we can continue to celebrate it by creating a stable and diverse environment for the people who live there.”

Irving disagrees. “This used to be a black neighborhood,” he explains. “You used to be able to drive down Manchester and Tower Grove and you knew you were going to be around black people.”

Irving, who moved to St. Louis as an eleven-year-old, has witnessed St. Louis’ transformation firsthand. “There used to be an African bookstore in that building,” Irving continues, referring to the Ujamaa Maktaba book store. “Even before Sweetie Pies was a big thing and these white folks moved in, there used to be black people here. Why can’t they give the tax breaks to black business owners in the area before the white folks bringing their businesses in? That’s erasure.”

Still, Restoration STL stands behind its years of work, explaining that its mission is to restore neighborhoods, not just buildings. In August, Amy Gill told us that if another qualified artist wanted to paint a new mural in honor of “the St. Louis Wall of Fame,” the founders would gladly lend their support.

“We also offered that if anyone who was qualified wanted to paint a new mural we would help them,” she said in an email. “We have had two people respond and we are working with them.”

By the end of the month, the work had begun. Only this time, the mural was begin painted on the side of the Gramophone.


In case you haven't heard the good news yet, the St. Louis Wall of Fame is returning to the Grove! Thanks to @thegramophone, the Grove CID, Herbert Hoover Boys & Girls Club and muralist Grace McCammond for making this possible. Look out for kids painting on the western side of the Gramophone starting next week! #thegrovestl #publicart


Editor's note: This story was updated after publication to make it clear that work on restoring a "St. Louis Wall of Fame" in a new location is now underway. We regret not including it in our earlier draft.

Jump to comments
« Ellie Kemper Bragged to HuffPo Abou…  |  The Best Things to Do in St. Louis… »