The Gentle Barn has been Ellie Laks Weiner's dream since she was a seven-year-old girl growing up in St. Louis.

“There were lakes and forest around my house and I would play out there with the tadpoles and the frogs and I just absolutely was obsessed and loved nature and animals,” Laks Weiner says.

When she got older, Laks Weiner says, she would find birds falling out of their nest or turtles with broken shells and bring them home (her parents put them back while she was at school). She wanted a house full of animals who would be her friends.

Eighteen years ago, Laks Weiner discovered an abusive petting zoo in Los Angeles where the animals were suffering tremendously. She started taking the animals home.

“One day I looked out my backyard that was now full of animals and said, ‘Holy crap, I just started my dream,’” says Laks Weiner.

With that, Laks Weiner founded the Gentle Barn in 1999. Her husband and co-founder, Jay Weiner, joined the nonprofit in 2002 as a volunteer. The Gentle Barn now has locations in Knoxville, Tennessee, and Los Angeles.

Its third, located in Dittmer, Missouri, in Jefferson County, will celebrate its grand opening this weekend. The Dittmer location already houses some local celebrities — the cows that famously escaped a north city slaughterhouse, only to find that their fame had liberated them.

In fact, those cows are the reason the Gentle Barn has opened in Missouri.

The Gentle Barn does two things: It takes in animals nobody else wants because they are too old, too sick, too lame or too scared to be , and it rehabilitates their bodies and the animals sanctuary for the rest of their lives. Volunteers read and sing and take naps with the animals, helping them to start trusting people again. Once the animals are ready, they help to heal people who have themselves suffered abuse and neglect.

“[Animals] get to come here and not only have wonderful food, clean water, open pastures, plenty of , but they also get to recover,” Laks Weiner says. “I think if you take an animal from severe abuse and set them in a pasture somewhere to eat and poop, yeah, that’s a more peaceful life, but the trauma still lives inside them.”

Laks Weiner had been watching the news from her home in LA when she saw the slaughterhouse cows breaking free in St. Louis. She was hopeful that a sanctuary or a local organization would come and get the cows once they were returned to the slaughterhouse — and feared they would be killed if not. Laks Weiner got on a red eye that night to St. Louis and arrived in the morning.

When Laks Weiner met Chico, the leader, something about him brought her to tears. His energy felt larger than life — she thought to herself there was no way this cow could live the rest of his life out in a pasture pooping and eating. That's when Laks Weiner told her husband they needed to open a Gentle Barn in the St. Louis area.

Laks Weiner found a property in the area, reached out to the community and started a GoFundMe campaign. They raised the money in three weeks.

The cows were placed in a foster home until their new home was ready. There, the cows were always huddled together and guarded. Since coming home to the Gentle Barn, they have been making great strides. Laks Weiner says they have soft, peaceful faces, they go off on their own to explore and aren’t afraid anymore.

In fact, one cow, Roo, "is actually taking cookies from our hands which is amazing progress since they haven’t even been here two weeks,” Laks Weiner says. “The others are sniffing our hands but not quite brave enough to take the cookie yet.”

The Dittmer location will celebrate its grand opening on Sunday, September 24. They are open every Sunday thereafter from 10 a.m. to 2 p.m. and through the winter months with a covered arena.

You might think about joining the Gentle Barn this year on Thanksgiving day for its signature annual event. People come from all over the world to cuddle turkeys and celebrate their life and later enjoy a delicious plant-based feast. To conclude the evening, everyone participates in a Native American drum circle. It has been going on for eighteen years at the California location, and the past two years in Tennessee.

If you are interested in learning more about the Gentle Barn or want to see how you can help, visit gentlebarn.org. 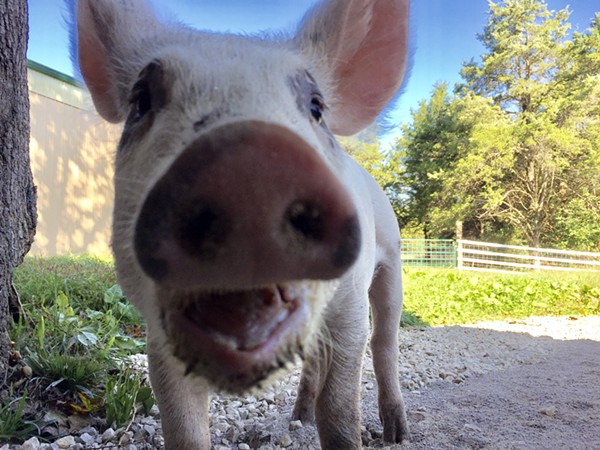 Editor's note: A previous version of this story referred to one slaughterhouse escapee as "Drew." He is actually "Roo." We regret the error.