We're a week out from Halloween, which explains the number of scary movies in this week's events. But that doesn't mean you have to participate: Forced merriment is the worst. We also have ballet, and wrestling and a strange musical about privatized toilets — there really is something for almost everyone.

1. Laugh out loud at John Mulaney
Broadway baby John Mulaney is fresh off a highly successful run as cantankerous sex pest George St. Geegland in the bizarre stage show Too Much Tuna. Prior to treading the boards, Mulaney worked as a stand-up comic and writer on Saturday Night Live. His stand-up is powered by his near-obsessive layering of detail into strange-but-true stories, which include tales about his childhood and his dog and playing insidious pranks with a diner's jukebox. Mulaney is back on the road with his new comedy tour, Kid Gorgeous. He performs at 7 and 10 p.m. Thursday, October 19, at Peabody Opera House (1400 Market Street; www.peabodyoperahouse.com). Tickets are $22 to $32.

2. Catch a pro wrestling show at Scottrade
The WWE returns to St. Louis one more time this year, and tonight is the night. WWE Live takes over Scottrade Center (1401 Clark Avenue; www.scotttradecenter.com) at 7:30 p.m. Friday, October 20, and a host of current favorites are scheduled to attend. Seth Rollins and Dean Ambrose are slated to defend their RAW Tag Team Championship belt against Sheamus and Cesaro, and in the headlining bout Roman Reigns will take on Braun Strowman in a "last man standing" match. It doesn't matter who gets knocked out; what matters is who's able to get on his feet first. Finn Balor, Alexa Bliss, Sasha Banks and the Hardy Boyz are also on the bill. Tickets are $23 to $118.


3. Be amazed by Keith Jozsef
Master illusionist Keith Jozsef's annual Halloween shows are an established tradition by this point. But this year, Jozsef goes back to his roots with an intimate performance that allows audiences to appreciate the artistic side of what he does. He Do Voodoo features Jozsef performing feats of uncanny mind-reading, as well as his innovative illusions (he's been known to plunge a sword cross-wise through an assistant's throat rather than down it) and his own unique up-close magic at 8 p.m. Friday, October 20, at the Lynch Street Tavern (1031 Lynch Street; www.keithjozsef.com). His Halloween show is darker and more mature than his usual performances, so be warned: Things are often more unsettling when they're happening right in front of you. Tickets for He Do Voodoo are $25 to $30.


4. Catch a silent horror classic — with live music
John S. Robertson's silent film adaptation of Dr. Jekyll & Mr. Hyde was produced in 1920, long before the advent of computer-driven special effects. And yet that doesn't preclude the film from being effectively frightening, thanks to the acting technique of star John Barrymore. "The Great Profile" turns in amazing performance without speaking a word, relying on posture and facial expression to play two sides of the same man: one tremendously good, and the other absolutely evil. Barrymore is almost unrecognizable as Hyde, aided by a lank and greasy wig and prosthetics to make his head pointed and his fingers lengthened. Even with its barely 50-minute run-time, the film leaves a lasting impression. The Webster Film Series presents Dr. Jekyll & Mr. Hyde at 7:30 p.m. Friday, October 20, at Webster University's Moore Auditorium (470 East Lockwood Avenue; www.webster.edu/film-series). Cinematic band the Invincible Czars performs its minimal soundtrack for the film during the screening. Admission is $10.


5. Catch The Rocky Horror Picture Show at the Tivoli
Just like Christmas trees in December and Uncle Sam/Betsy Ross erotic cosplay in July, you can't celebrate Halloween without indulging in The Rocky Horror Picture Show sometime in October. The film moved past "cult classic" status once it entered the Library of Congress' National Film Registry in 2006, making it officially a bona fide classic. Richard O'Brien's immortal love story tells the tale of decent American couple Brad and Janet (a couple of squares) who break down on the road and seek help at the castle of Dr. Frank-N-Furter on the same night he's about to bring his greatest, most virile creation to life. There's very little horror (unless you're terrified by alternative lifestyles), but a whole lot of singing about what's hot and being brave enough to live out your dreams. The Rocky Horror Picture Show is shown at 11:55 p.m. Friday and Saturday (October 20 to 28) at the Landmark Tivoli Theatre (6350 Delmar Boulevard, University City; www.landmarktheatres.com) as part of the Reel Late series. The Samurai Electricians returns to perform the essential role of "shadow cast," which recreates the movie while it screens. Tickets are $10. 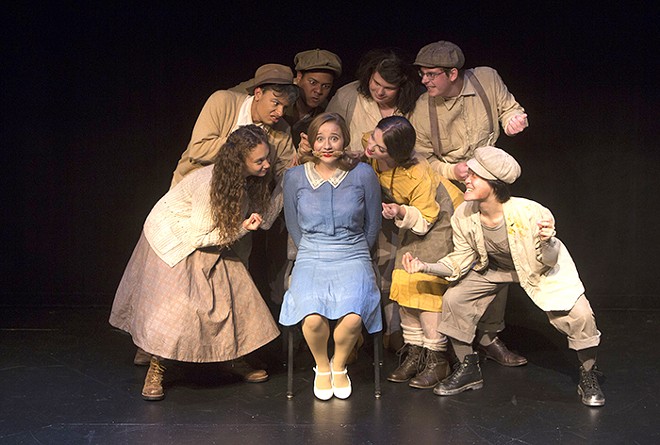 6. Thrill to Urinetown the Musical
In the near future of Urinetown the Musical, having a private toilet is a crime. A long-lasting drought has dangerously depleted the world's water supply, leaving public pay toilets as the only sane option for the citizens' relief. But the CEO of the company that runs the toilets wants to raise the rates again, which will make the daily tinkle an unaffordable luxury for the poorest citizens. And don't even think about whizzing in the streets — that's a crime punishable by lifetime banishment to the grim peenal colony (tee-hee) called Urinetown. Greg Kotis and Mark Hollmann's dark satire of modern life follows the heroic Bobby Strong as he attempts to free the people from the grip of corporatized urination. The Washington University Performing Arts Department presents Urinetown the Musical at 8 p.m. Friday and Saturday and 2 p.m. Sunday (October 20 to 29) at Washington University's Edison Theatre (6465 Forsyth Boulevard; www.edison.wustl.edu). Tickets are $10 to $20.

7. Head off to see the Wizard at COCA Charlie Smalls and William F. Brown's "super soul musical" The Wiz has been a hit with audiences since its debut, and with good reason. The show recasts the well-known and loved story of The Wizard of Oz as an urban fantasy that changes the narrative in subtle ways. The Wiz's Dorothy is also a day-dreamer who gets carried away to a strange world of talking metal men and cowardly lions, but when she's returned home safe and sound at the end she's also learned an important lesson about believing in herself and what she's capable of doing. The COCA Theatre Company presents The Wiz at 7 p.m. Friday and at 1 and 5 p.m. Saturday and Sunday (October 20 to 22) at the Center of Creative Arts (524 Trinity Avenue, University City; www.coca-stl.org), with guest director Ron Himes of the Black Rep helming the show. Tickets are $14 to $18.

8. See a ballet simulcast on the big screen
Conrad is a pirate who washed ashore with some of his crew after a shipwreck. A group of Greek women find them, and Conrad falls in love at first sight with Medora, one of the young women. Things are definitely on the upswing for Conrad, but Lankandem the Turkish slave dealer appears on the scene and absconds with Medora and her friends. Conrad and company then embark on a brave rescue mission, which requires him to conquer deception, disguises, betrayal and reversals before true love can be won. Le Corsaire, the ballet adaption of a poem by Lord Byron, is a massive undertaking; The Bolshoi Ballet's 2007 production cost a reported $1.5 million to mount. The Bolshoi returns with a live broadcast of Le Corsaire that uses Alexei Ratmansky's choreography (itself directly inspired by some of Marius Petipa's 1899 choreography). The ballet is simulcast at 11:55 a.m. Sunday, October 22, at the AMC Chesterfield 14 (3000 Chesterfield Mall, Chesterfield; www.fathomevents.com). Tickets are $19.55.

9. Laugh at RiffTrax's take on Night of the Living Dead
George A. Romero may be gone, but his groundbreaking film Night of the Living Dead remains very much alive. The 1968 film is a tense and unrelentingly grim experience, but those RiffTrax guys — Michael J. Nelson, Bill Corbett and Kevin Murphy — are sure they can wring a few laughs out of the horror. Their 2013 takedown of the film returns to theaters for one night only during the Halloween season. You can see them joke their way through Night of the Living Dead at 7:30 p.m. Wednesday, October 25, at the Marcus Wehrenberg Ronnies 20 (5320 South Lindbergh Boulevard; www.fathomevents.com). Tickets are $15.