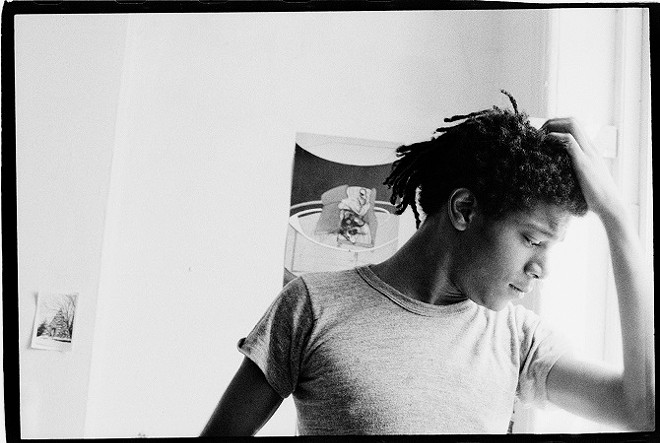 Jean-Michel Basquiat emerged from the New York City hip-hop/punk/graffiti scenes in the 1970s as one-half of the graffiti duo SAMO, along with Al Diaz. The pair together tagged buildings with cryptic phrases denouncing the establishment, politics and religion, always signed "SAMO" (an acronym for "Same Old Shit"). When the duo broke up, Basquiat performed in the noise rock band Test Pattern (later named "Gray") with Vincent Gallo and Michael Holman. He lived on the streets, sold drugs and experimented with Xerox art, painting and drawing.

A chance meeting with Andy Warhol resulted in the older Pop artist encouraging him and championing his talent. Basquiat took the bit between his teeth and turned out even more work, quickly graduating to the gallery world, where he was pigeonholed as a "naif" artist, despite his brilliant sense of composition, color and exceptionally detailed technique. By age 27 he was dead from a drug overdose.

Basquiat Before Basquiat: East 12th Street, 1979-1980 will showcase everything the artist made while living in a small East Village apartment with his friend Alexis Adler before he hit the big time. It's a treasure trove of paintings, sculptures and works on paper, as well as Adler's photographs of his friend.

This touring exhibition is organized by the Museum of Contemporary Art Denver, and will be on display from September 7 to December 30.

Jump to comments
« Send Your Sweetie a Puppy Gram on V…  |  The Best Things to Do in St. Louis… »