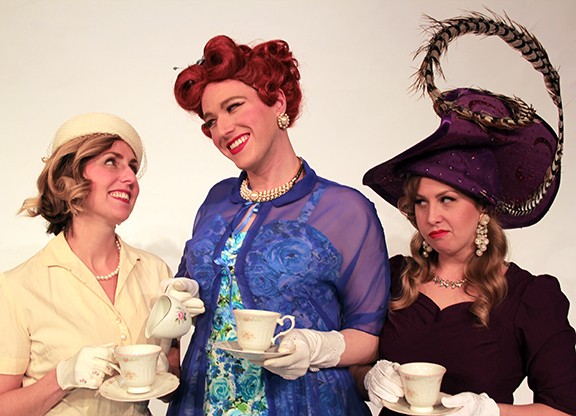 Charles Busch is not yet a household name, but he should be. The writer and star of kitschy Off Broadway plays Vampire Lesbians of Sodom (about two feuding, immortal lesbian vampires who go into showbiz in the twentieth century) and Die! Mommie! Die! (in which a once-great singer with a drug problem, a boyfriend and a plan to murder her husband is accidentally dosed with LSD) has a gift for combining the almost-comic melodrama of womens' movies with the gritty storylines of exploitation flicks. Busch ramps up the lurid appeal of his plays by starring as the put-upon female lead, who usually suffers from a serious flaw — like being a pill-popper or having 1960s-style split personalities. (He also wrote the Tony Award-nominated hit The Tale of the Allergist's Wife, so he's clearly a man of many talents.)

Stray Dog Theatre artistic director Gary F. Bell has been an avowed fan since seeing Vampire Lesbians of Sodom's original run in New York. "I left thinking, 'What a unique way to present theater.' It had everything — satire, camp, gender fucking, female empowerment, jokes. But more than that, he's extremely bright. If you're a literary person, a theater person, there are references to Ukranian directors, artists, so many references. He has so much more genius than people give him credit for."

Bell is well-versed in that genius, having directed Busch's Psycho Beach Party and Die! Mommie! Die! for Stray Dog Theatre in the past decade. He's currently in the final stages of rehearsing Red Scare on Sunset, which opens Thursday. He sums up the appeal succinctly: "He makes me laugh about topics that are difficult to laugh about."

That degree of difficulty almost stopped Bell from ever attempting to mount one of Busch's plays.

"The first one we did was Die! Mommie! Die!, and I was sweating," he recalls. "The star of the show tries to poison her husband with a suppository, and I'm worried: 'Will they get it? Will they find it funny?'"

Further complicating matters was the play, meant to be Stray Dog's Christmas show, was packed with adultery, near incest, drug use and actor Roger Erb's very tight pants. Still, at least one person went on record with enthusiastic approval for more Charles Busch and less Charles Dickens in December.

Red Scare on Sunset is a 1950s thriller that mixes the McCarthy era with A Star Is Born. Mary Dale is Hollywood's leading lady and a staunch conservative. She's shocked to discover the local Method acting class is in fact a cover for the communists, and sets out to bring down its organizers and save her country. Local actor Will Bonfiglio stars as Mary Dale, a feat that is less about dressing in drag and more about acting than you may think.

"I don't call what Charles Busch does 'drag,'" Bell claims. "I refer to him as a 'female illusionist.' He recreates famous women stars , and then tells stories of female empowerment. Drag performers make their own persona; here you're recreating a person, or a combo of peoples."

At this point, Bell has a checklist when casting a Busch leading lady. "They have to have a keen sense of female experience — and you have to wear heels from the beginning," Bell explains. "You need a gay humor sensibility mixed with Old Hollywood divas. Busch takes that female style and projection and honors it; he recreates it in a heightened, steroid bubble. They should have some curves, but you can hide a lot with costuming."

In addition to looking the part, Bell also has to make it clear to his cast that there is no such thing as "too broad" when acting in a Busch play. "I have to work with my actors to make them play it correctly. They say, 'My acting teacher says I can't do that, it's wrong.' I have to tell them it won't work otherwise; you have to play it broadly or it won't work, because it all comes down to writing. But I do tell the cast we need to look at this in two pieces: There's the cake, and there's the icing. You need to research the references, and know who that is, because it's a huge part of Busch's plan. There's a path there you need to follow."