Apotheosis Comics (3206 South Grand Boulevard, 314-260-1689) may have soft-opened back in September, but as of this week, its opening is officially Grand.

That's because, up until this point, a large component of the new space has been missing: its bar and lounge.

"We have been open in our current location since September and we've slowly been plugging along, getting the liquor license set up and the bar and everything else," says owner Martin Casas, 37. "But now we're having our grand opening. All the pieces are in place and we're finally gonna have everything we need."

Casas says that Apotheosis will be one of only five comic book shops in the country that has its own bar, and the only one in Missouri. He explains that the majority of comic book fans are his age — mid-thirties — and that those fans have evolved over the years. It's time, he reckons, for comic book stores to evolve with them.

"They would normally go home and drink a beer and read their comics," Casas says. "Well, now they can do that at our store."

A handful of tables and chairs sit in the back of the shop, just delivered on Tuesday — this is the lounge area. A pair of stand-up arcade games line the wall, next to two coolers full of drinks. The bar will serve coffee, local craft beer, wine and snacks. Crate after crate of comics will provide all the entertainment a comic book fan could possibly need.

In an age of overall decline for brick-and-mortar shops, there's a practical reason for Casas' unique approach as well.

"What we're really trying to do is figure out how to beat our biggest competitor, which is the Internet. Like, anything we have in the store you can find online," he says. "So in order to survive, what we needed to figure out is a new way of attracting customers to the store and keeping them there — we had to build a community around the store. Having a bar inside where people can get a drink and read a book is a good way of doing that."

When Casas first got into comics, that wasn't so much of a concern — the Internet was still in its infancy. He still has the first comic he ever got, purchased for him by his grandmother during a trip to the store when he was only eight years old. Batman No. 435 — "The Many Deaths of the Batman, Part 3" — is framed and hanging on his wall.

But it was another DC Comics character that solidified his interest in the art form: Superman. Specifically, the "Death of Superman" storyline of 1992 — a seismic event in comic book history.

"I remember I got all the comics and I read 'em, and I was like, 'Oh my god, they actually killed him,'" he says. "I was one of those guys that really went into it all, and that really hooked me. Since then I've been reading comics my entire life." 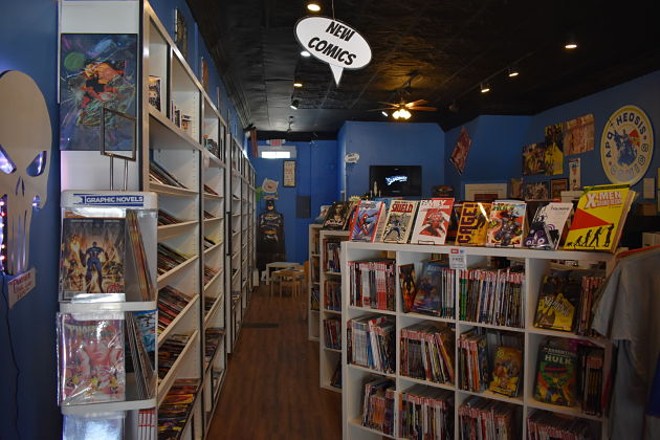 It's fitting, then, that the grand opening of the store correlates to the release of Action Comics No. 1000, celebrating 80 years of Superman.

"It's a humongous milestone," Casas says. "It's the first superhero, and people kinda think he's always been around — and he has, since 1938, in the public consciousness. I think he's the third most recognized symbol. After the McDonald's arches and the Christian cross it's Superman's shield."

And to his mind, that's a very good thing.

“St. Louis is the perfect place for a comic book store like ours, and a perfect place to celebrate the spirit of Superman,” Casas says. “We are a city of transplants and of immigrants — like Superman, we say, ‘I’m not from here, but I’m here now, and I want to help.’”