Lost in the Stars Tackles Weill, and Apartheid-Era South Africa

Shaun Patrick Tubbs has only been in St. Louis a few weeks, and already he's weary of hearing the same response when he talks about directing Union Avenue Opera's forthcoming production of the Kurt Weill and Maxwell Anderson musical Lost in the Stars, which is based on Cry, the Beloved Country, Alan Paton's novel of Apartheid-era South Africa.

"People keep saying to me this show is 'so relevant' to St. Louis. And I keep asking them, ‘Isn't that a shame?'" Tubbs says. He offers a disingenuous smile, but he means it. "This is a show that's relevant to all of America, and it is a shame. But we keep getting better. I know that because I'm here directing this piece."

"This piece" is the story of a black father and son, Stephen and Absalom Kumalo, living in South Africa. Stephen is an Anglican priest, and he raised his son to be a moral person. But when Stephen goes to Johannesburg to find his son, he learns that Absalom has has committed serious crimes. During a robbery, Absalom kills a white man and faces the death penalty. This shakes Stephen's faith and also brings him into close contact with the murder victim’s grieving father.

Tubbs grew up in Cleveland, Ohio, and now travels the world directing and performing. He's a fellow of the Kurt Weill Foundation, which directed him to Union Avenue Opera. The company had contacted the foundation in search of a director with a strong background in Weill's work. That was Tubbs, even though he freely admits this particular show wasn't even on his radar.

"When the foundation reached out to me about directing this, I had to do my research because I wasn't familiar with it," he recalls.

Tubbs immersed himself in both the musical and the source novel. During the course of an hour-long interview, he never looks at his phone or casts about for an answer; he's focused completely on the matter at hand. His vision for Lost in the Stars is clearly defined and inspiring. Tubbs acknowledges that this a show written by two white men, for a white audience, in 1949. For him, that's a feature, not a bug.

"I don't want to point out all the things wrong with the show. I want to embrace them," Tubbs says. "It's too simple to say this is white-and-black story. The story is in the gray. Once you make them all come together, that's when you get in the gray, that's when things happen."

That togetherness is bound to Tubbs' frequent refrain, "It's a show about people. The stage will be littered with bodies." 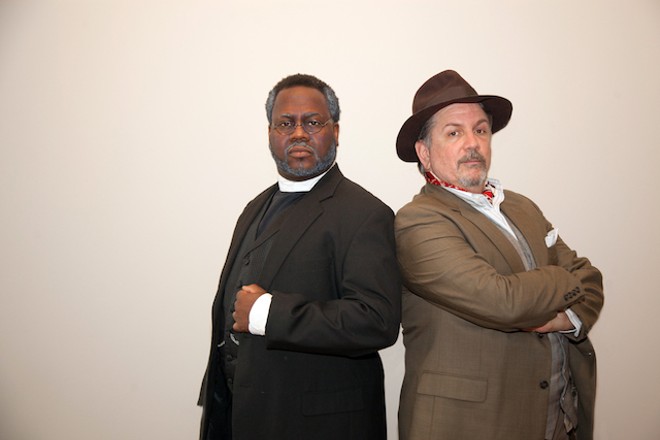 For Tubbs, it comes down to what's been lost and the choices that have been made. Stephen drilled Absalom in the Ten Commandments and the word of God, but Absalom kills a man. How could he go so far astray?

"Absalom has learned how to be moral, but he hasn't been taught how to live in the real world with that code," Tubbs explains. "His village has been over-milled and over-plowed, and so there's nothing left for the next generation. The future is in Johannesburg, but the city is full of rules and restrictions for a black man. The future isn't for them."

Yet just as Shaun Tubbs is here directing Lost in the Stars in 2018 St. Louis — something that was impossible in 1949 America — Tubbs still sees the opera as being about hope. He is crystal-clear on what he hopes audiences take away from the show. "I want people to leave with a question in their mind; I don't want them to leave with an answer. I want people to question what they're doing in this. I don't want to lose hope for the future, but I want us to think what can we learn to give the next generation a future?"

Lost in the Stars is presented by Union Avenue Opera at 8 p.m. Friday and Saturday (August 17 to 25) at the Union Avenue Christian Church (733 North Union Boulevard; www.unionavenueopera.org). Tickets are $30 to $55.