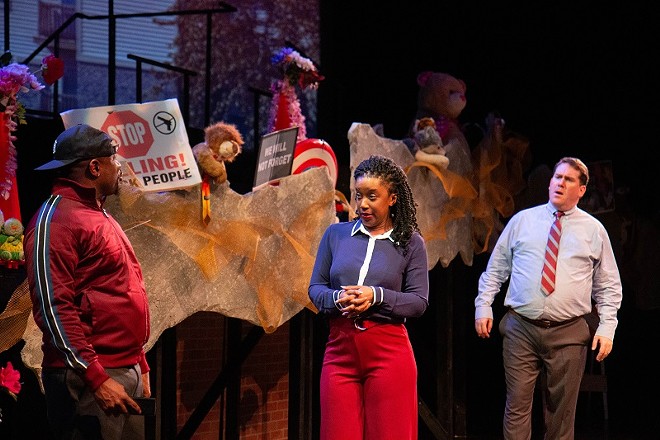 It's cold outside, the weather people are predicting snow and right now you're plotting to leave work early and buy all the milk and bread you can squeeze in a shopping cart. But there is another way: What if you simply slept in on Saturday, had a late breakfast and then got on with your weekend as normal? It's a radical proposal— and feel free to ignore it and enjoy your own weight in French toast instead — but there are a lot of interesting things happening this weekend. There are two art shows, a new play commissioned by the Black Rep about the aftermath of Michael Brown's death and a celebration of beer and the outdoors.

1. What Happened to Us?
The civic protests following the killing of Michael Brown by a police officer will enter St. Louis history as an event as momentous as the Jefferson Bank Protests of the 1960s and the Dred Scott trial of the 1850s. But in the days after Brown's death, a long view of history wasn't possible. As international media crowded into Ferguson and tried to make sense of the region's troubled history with race, equal opportunity and community policing, it felt as if the facts changed daily. It's this tangle of news personalities and deadlines that informs Kristen Adele Calhoun and Michael Thomas Walker's new play, Canfield Drive. Two reporters with very different views of the story try to piece together the truth about what happened on a hot August day on a suburban street, while also trying to keep their own pasts from becoming part of the narrative. Calhoun and Thomas have spent four years working on the script with the St. Louis Black Repertory Company, which commissioned the play alongside the National Performance Network and 651 Arts. Canfield Drive is informed by first-person interviews with people from the metro area and from around the world, and it seeks to start conversations about race, culture, history, privilege and healing. The Black Rep presents the world-premiere production of Canfield Drive at Washington University's Edison Theatre (6445 Forsyth Boulevard; www.theblackrep.org). Performances are at 7 p.m. Wednesday and Thursday, 8 p.m. Friday and Saturday and 3 p.m. Sunday (January 9 to 27), and tickets are $15 to $45.

2. Picture This
Once reserved for the wealthy and the social elite, portraiture has been democratized down to the informal level of the selfie. Freed from its staid origins, the modern portrait can be heroic representation, transgressive, humorous or an act of wish fulfillment. Current Profile, the new exhibition at the Craft Alliance Center of Art + Design (6640 Delmar Boulevard, University City; www.craftalliance.org), explores contemporary portraiture in all media. The show features everything from Richard Wehrs' sculpted bust of an alien warrior to Cayce Zavaglia's embroidered image of a young woman in pigtails, and all points in between. Current Profile opens with a free reception from 6 to 8 p.m. Friday, January 11. The exhibition remains up through March 17. 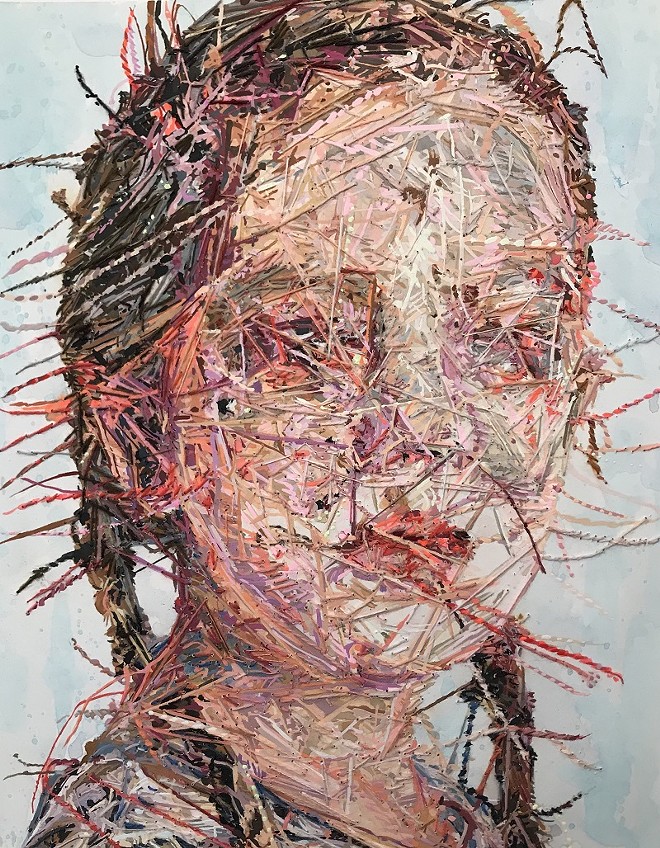 3. Current Art
The Ann Metzger National Biennial Exhibition is the St. Louis Artists Guild's commitment to contemporary art made real. Metzger was a longtime member of the Artists Guild, and she bequeathed money to the institution to fund cash prizes for working artists. The exhibition features art in all media by more than 50 artists from across the country. This year's show opens with a free reception from 5 to 8 p.m. Friday, January 11, at the St. Louis Artists Guild (12 North Jackson Avenue, Clayton; www.stlouisartistsguild.org), and includes abstract art, figurative painting, sculpture and digital media. The Biennial remains on display through February 23.

4. Go Inside to Get Outside
The St. Louis area has a robust system of parks and rivers for us to frolic in and on. If you can't remember the last time you enjoyed time outdoors, perhaps one of this year's resolutions should be to rectify that? The Mississippi Valley Bike + Outdoor Expo can ease you outside with useful advice and practical hands-on experience with the tools (and toys) of real-world recreation. The expo offers vendors selling bikes, paddleboards, climbing equipment, bicycles of all types and kayaks, as well as sports doctors and nutritionists who can reassure you that it's never too late to start down a new path. Whether you'll blast down that path on a mountain bike or amble along it is up to you. The Mississippi Valley Bike + Outdoor Expo takes place from 1 to 6 p.m. Saturday and 10 a.m. to 4 p.m. Sunday (January 12 and 13) at St. Louis Union Station (1820 Market Street; www.bikeandoutdoorexpo.com). Tickets are $8 to $12, and kids ages 12 and younger are free.

5. Al Fresco Beer
It's been a mild winter so far (especially compared to last year), but a bad case of cabin fever doesn't depend on the weather. A couple of weeks of gray skies and early sunsets are enough to make even the staunchest lover of winter start dreaming about blue skies. Schlafly's always-popular Cabin Fever takes place from noon to 4 p.m. Saturday, January 12, at the Schlafly Bottleworks (7260 Southwest Avenue, Maplewood; www.schlafly.com), and it provides all the impetus you need to get outside and have some fun. More than 40 varieties of beer will be sampled outside (tickets include a commemorative tasting glass), and food will be available to purchase on the festival grounds and inside the restaurant. Cabin Fever is a rain-or-shine event, but if the weather gets dangerous, a rain date is planned for January 19. Tickets are $35 to $40 and going quickly.

6. Death of an Icon
When DC Comics killed Superman in 1992, the story became national news, and the issue that revealed the means of his death (an alien warrior) sold in record numbers. Of course, Superman didn't die, but for a few months it appeared that he had. In that interregnum, writers and artists were able to imagine how heroes and villains alike would react to his death and explore what Superman meant to the world. The epic storyline is the inspiration for the 2018 animated film The Death of Superman, which is pretty faithful to the comic-book storyline (a rarity in superhero films). The Death of Superman receives a limited theatrical release on a double bill with the new film Reign of the Superman, which adapts those post-death stories of the mid-'90s. Both films screen at 12:55 p.m. Sunday and 8 p.m. Monday (January 13 and 14) at the Marcus Wehrenberg Ronnies Cine (5320 South Lindbergh Boulevard; www.fathomevents.com). Tickets are $12.50.