Founded by Mizzou Grads, Roo Storage Is Coming to St. Louis to Disrupt the Storage Market 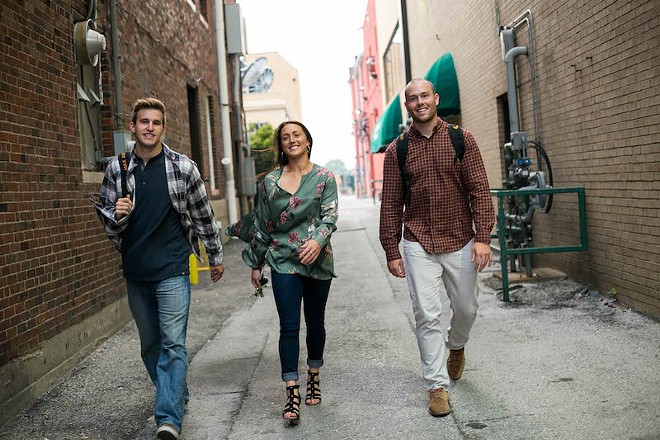 The idea behind Roo Storage, the Columbia, Missouri-based startup launching now in St. Louis, came from Eric Laurent's frustration with attempting to secure short-term storage space. Like many college students, Laurent found himself with a gap between apartment leases — in his case, a two-week one. But he couldn't find anyone willing to take his stuff.

"He called literally seven storage facilities," says his friend Jake Hurrell. "The eighth had a vacancy, but it was twenty minutes away, and too expensive." Laurent ended up solving the problem by finding an acquaintance with a garage a few houses away ("He gave her a bottle of Riesling and $30," Hurrell says).

But out of that frustration, an idea was born. What if, Laurent and Hurrell and their friend Kristen Rivers wondered, they could disrupt the storage market just as Uber and Lyft had disrupted the taxi industry? What if people with extra space could post its availability — and people who in desperate need of that space could find it online? With that, RooStorage.com was born.

In just one year in Columbia, Roo booked 2,000 days of storage. This month, it's launching in St. Louis, where it hopes to double down on that success.

Right now, Hurrell says, the big need is for people with storage space to sign up. A native of St. Charles (Laurent is from Ballwin), he's already enlisted the people he knows through a soft opening. "Now is our big, official, 'Hey St. Louis, if you have space, let's turn it into passive income,'" he says. With the school year racing toward its conclusion, he notes, "The storage demand in St. Louis is really about to pick up."

And for those searching for storage, Roo Storage's entry into the market could make things a whole lot easier — and more cost-effective. Because you can rent space by the day, not just the month, Hurrell says it should be anywhere from 40 to 70 percent cheaper than traditional storage facilities — as well as being more convenient.

The three co-founders are all student-athletes who graduated from Mizzou's MBA program last spring. Hurrell acknowledges people might have been skeptical of their idea at first, but they got a big push through the university, which featured them in a story. They were able to raise $100,000 in investment, and are now based in Columbia's Missouri Innovation Center incubator.

Having other "sharing" models within the marketplace has helped open eyes to the possibilities, Hurrell says.

"Airbnb, Lyft, Uber, they paved the way for Roo to come about and utilize excess space in this manner," he says. "We've had everybody from families with eight kids to single moms to businesses with warehouse space sign up. They were maybe interested in doing Airbnb but weren't comfortable having people actually staying in their home.

He adds, "They were comfortable with boxes."