It's unofficially Halloween on Saturday night, which means there are parties galore if you're in the mood. If you prefer a dark Expressionist film or a close-quarters dance performance in near-darkness, those are also options this week. Read on for more.

1. Danse Macabre
Last year for Halloween, Leverage Dance Theater presented a site-specific dance performance inside the darkened Intersect Arts Center (3636 Texas Avenue; www.leveragedancetheater.org). The company returns to the Intersect to present The Forgotten, which is a fine-arts take on the haunted house. Dancers will move throughout the building while audiences follow them, which means you should be able to climb stairs and be comfortable in relative darkness. If you want to really get in the spirit, the company suggests you come up with an outfit inspired by the themes of "decay and darkness." The Forgotten is performed at 7 p.m. Thursday and 7 and 9 p.m. Friday and Saturday (October 24 to November 2). Tickets are $20 to $30.

2. 50 Years in the Books
For five decades Left Bank Books has survived changing times, changes in ownership, the rise of Amazon, peak TV and every other possible complication. The St. Louis of 1969 was a very different place, and yet one thing remains the same: People still buy books from independently owned bookstores. Left Bank Books commemorates 50 years of community involvement and hand-sold books with a special 50th anniversary party that starts at 7 p.m. Friday, October 25, at the Mahler Ballroom (4915 Washington Boulevard; www.left-bank.com). There will be a cash bar, door prizes, a silent auction, light refreshments and birthday cake, as well as live music by Katarra Parson and special presentations by authors. Admission is only $30, and the dress code is casual.

3. The Doctor Is Way Out
Jane, Alan and Francis all go to the carnival for fun, but instead are deeply unsettled by one of the acts. Dr. Caligari claims he's the caretaker for a young man named Cesare who has been asleep for more than twenty years; Caligari further claims that when questioned, Cesare can predict the future. Dubious, Alan asks how long he will live, and Cesare predicts he'll be dead by morning. When Cesare's prediction comes true, it spurs Francis to investigate Caligari and his strange charge, with disastrous results. Robert Wiene's silent film The Cabinet of Dr. Caligari was released in 1920, and 99 years later it remains an eerie, disturbing film thanks to its off-kilter set design and stark, haunting lighting. The Cabinet of Dr. Caligari is screened with a live score composed and performed by Austin's The Invincible Czars at 7:30 p.m. Friday, October 25, at Webster University's Moore Auditorium (470 East Lockwood Avenue; www.webster.edu/film-series). Tickets are $12, and costumes are encouraged.

4. Halloween All Day
There are Halloween parties, and then there is the Central West End Halloween Party. The all-day outdoor celebration starts at 11 a.m. Saturday, October 26, with a kids' costume party and parade, led this year by Cinderella and her magical carriage. At 1 p.m. the costume parade for dogs and their people starts, and then general revelry continues until 6 p.m. when the adults-only party begins. The big event is the costume contest, which always features the most creative and inspired costumes in the city because $6,000 in cash and prizes is up for grabs to the best of the best in various categories. Competing in the adult contest costs $25 for individuals and $50 for groups (cash only), but entry to the event is free. The CWE Halloween Party is centered on the intersection of Maryland and Euclid avenues (www.cwescene.com). Pretty much all the neighborhood restaurants and businesses participate in one way or another, so bring your party money to ensure a good time. 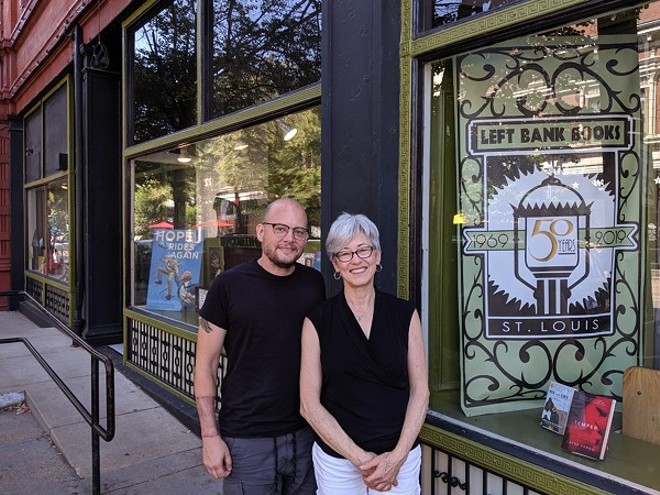 5. Blonde Ambition
Delta Nu sorority sister Elle Woods has aced college and is now ready to get started on her happily ever after with dreamy boyfriend, Warner. But when Warner tells Elle he needs someone "more serious" now that he's off to Harvard Law School, she eventually follows him to prove she can be serious. What she ends up gaining from law school is a belief in herself and the realization that she's more than just another pretty blonde. Legally Blonde is a musical juggernaut thanks to its compelling central argument: Anyone, even the pretty "it" girl, can be greater than they think possible if they work for it. The Washington University Performing Arts Department presents Legally Blonde with an entirely age-appropriate cast. Performances are at 8 p.m. Friday and Saturday and 2 p.m. Sunday (October 25 to November 2) at Washington University's Edison Theatre (6445 Forsyth Boulevard; www.edisontheatre.wustl.edu). Tickets are $15 to $20.

6. Our Glorious Past
In the 1970s, Seventh Street at Chestnut was chockablock with high-rise buildings that represented civic wealth. Only the Wainwright Building, now a National Historic Landmark, remains standing. Photographer Jennifer Colten, in conjunction with the Luminary and the National Building Art Center, presents the large-scale installation Real Estate Row, which examines the built environment of St. Louis along Seventh Street. In a vacant storefront at Seventh and Pine streets, Colten displays archival photos of the region formerly known as Real Estate Row, her own photographs of architectural elements from the buildings that were demolished and scans of the region that show the ebb and flow of downtown St. Louis. Jennifer Colten: Real Estate Row opens with a free walking tour of the neighborhood from 5 to 7 p.m. Saturday, October 26. The tour is led by historic preservationist Michael Allen.

7. His Mewes
Kevin Smith has consistently disrupted the standard movie-maker's playbook, from bankrolling his first film with the sale of his comic books to touring the country with a copy of his film rather than going through distributors. The latter is Smith's plan for showing his new movie Jay and Silent Bob Reboot. Jay and Silent Bob (best friends Jason Mewes and Kevin Smith, respectively) are stoners who hang around outside various Jersey businesses and engage in low-level shenanigans. When they learn Hollywood moguls plan to reboot an old movie based on their lives, they head west with a vengeance. In a case of life imitating art, Smith and best friend Jason Mewes ramble across America, screening the film for fans and then answering audience questions afterward. The duo plan to show Jay and Silent Bob Reboot at 8:05 p.m. Sunday, October 27, at the Pageant (6161 Delmar Boulevard; www.thepageant.com), and then start taking questions at 9:30 p.m. Tickets are $42.50 to $50.