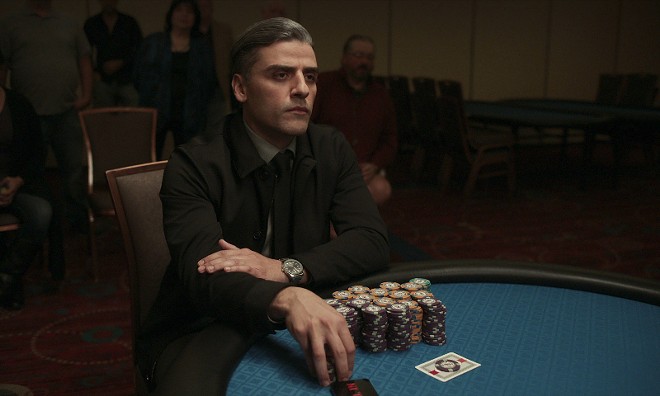 In The Card Counter — written and directed by Schrader, and produced by Martin Scorsese — his brooding lead takes the form of William Tell (Oscar Isaac), an itinerant gambler and former soldier whose history of incarceration is revealed early on, via voiceover, as are the secrets to counting cards. “As a boy, I was afraid of confined spaces,” he shares, noting the irony that a stint in prison taught him an enviable quantitative skill, and in that, a degree of solace. “That’s all for me,” are William’s first spoken words, as he pushes himself from a roulette table with his modest pile of chips.

From the volcanic indignation of Taxi Driver and Raging Bull to the quasi-Christian masochism in The Last Temptation of Christ and First Reformed, Schrader likes his heroes troubled and self-loathing, his settings equally gritty and banal. Appropriately, Schrader’s latest morality tale opens in Sin City — advisedly not a glamorous mecca of five-star hotels and overflowing jackpots. Via Alexander Dynan’s unsparing cinematography, Las Vegas is a place where stray cats cross casino parking lots, a concrete Krispy Kreme bakes in the desert sun and the Motel 6 concierge flatly recommends day-old coffee.

Within this hell of clanging slot machines, Tell’s talent for blackjack stokes the interest of a gambling scout named La Linda (Tiffany Haddish), who entices him with an offer he ostensibly can’t refuse. “You need someone to stake you,” she purrs, referring to her “stable” of promising gamblers while sipping a Tom Collins. “I’m always looking for a good thoroughbred.” Tell turns her down with a cool resignation, a fatalism at odds with his high-stakes profession.

Meeting an aimless young man named Cirk (Tye Sheridan) at a paramilitary surveillance showcase, Tell is forced to reckon with the trauma of his so-called “service” years prior in Abu Ghraib, the site of abject abuse on the part of the U.S. Army toward the start of the Iraq War. Tell’s offbeat paternalism toward the vengeful twenty-something — another signature Schrader trope — leads him to accept La Linda’s backing offer and make as much money as possible playing poker across the U.S. “If I can help him, maybe he has a chance to start over again,” he tells his enamored financier. “Resume his education and start a life.”

From here, like so many on the Schrader roster, The Card Counter unfolds as an exercise in restraint and brutality; corruption, and the violence it abets, lurks in every corner, even — or especially — when a brand of manly equanimity is on defiant display. Tell’s not playing to become wealthy or gain celebrity poker points, but to harness control over a chance-fueled, entropic universe. “Nothing, nothing can justify what we did,” he tells Cirk at a roadside diner en route to a new city, referring to his actions in Abu Ghraib. “Your father understood that. If you were there, you could understand. Otherwise there’s no understanding.” Part of the thrall of the film is anticipating just how long Tell will keep his demons at bay amidst a slew of triggers on their cross-country sojourn.


A sultry foil to Isaac’s somber mien, Haddish may at first be unrecognizable to fans of the actor best known for ribald antics in Girls Trip and Like a Boss. With her slick bob, black shades and slit-skirted dresses, Haddish makes the most of La Linda’s underwritten backstory, lending a throaty laugh to exchanges otherwise awkwardly terse. In Tell’s and La Linda’s most tender moments together — touring a family-friendly Middle America light show (shot at “Garden Glow” at the Missouri Botanical Gardens) — she shares with “Bill” her East St. Louis origins, her escape from a bad relationship, and how grooming gamblers became her full-time gig. “It doesn’t matter to me if you did something bad in your past,” she confides to her tortured shy guy. Such unlikely intimacy would be even more gratifying were Haddish given more to work with; as an actor she has to hustle at least as much as her character.

Like all Schrader ventures, any prospect of romance pales in comparison to the gnawing anguish endured by his lone male protagonist. Saddling an individualistic mystique and epic scope akin to a Western, The Card Counter culminates in a duel for the ages — and like most Westerns, morality means revenge.

For those who have grown tired of Schrader’s reshuffling of worn motifs, this movie might not be for you. It might also, justifiably, turn off those with issues seeing torture inflicted onscreen (though it’s hardly as gratuitous as Zero Dark Thirty). But this may be the most searing indictment of American turpitude in Schrader’s output so far — and for that alone, I was all in.