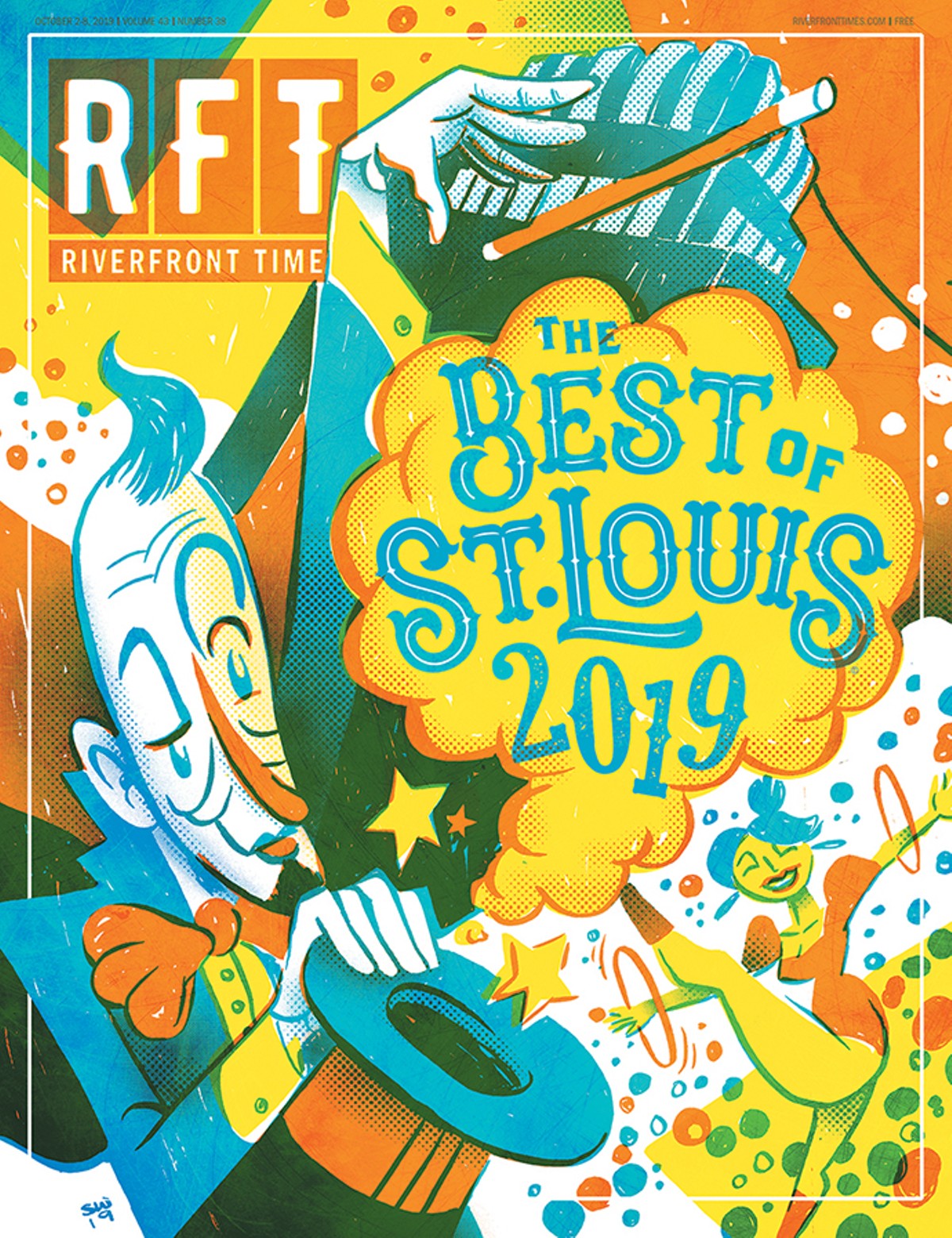 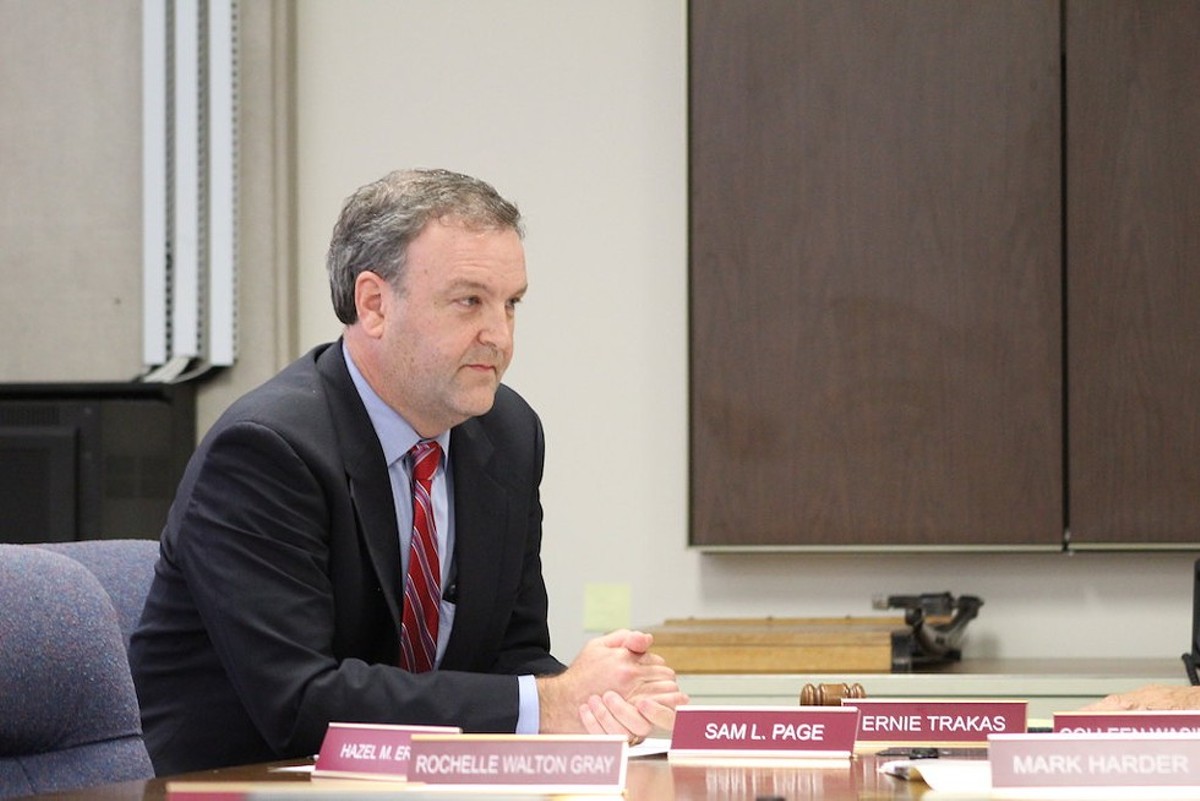 Sometimes being a politician isn't about what you are, but what you're not. For Dr. Sam Page, that meant not being a tremendously corrupt garbage fire of a government official — something which, now several months into his tenure as St. Louis County executive, appears to be going pretty well for Page. For St. Louis County, that's saying a lot: In April 2019, Page won the seat on a 5-1 council vote, which had come on a day that began with federal prosecutors charging then-County Executive Steve Stenger in a vast pay-to-play scheme. Stenger, now in federal prison in South Dakota, left behind quite a mess in St. Louis County. In response, Page made some smart moves, starting with promoting Hazel Erby, the sole council member who voted against his nomination, to join his administration as director of diversity, equity and inclusion. And while touting transparency and ordering stronger ethics policies, Page successfully pushed forward a stalled measure to purchase body cameras for the entire police force (something St. Louis City has yet to accomplish.) But with corruption's fingerprints still all over county government, expectations are high for Page, especially with his seat up for election in 2020. Page has to be more than just "not Steve Stenger." He has to be something that the county voters haven't known for a long time: a leader they can trust. 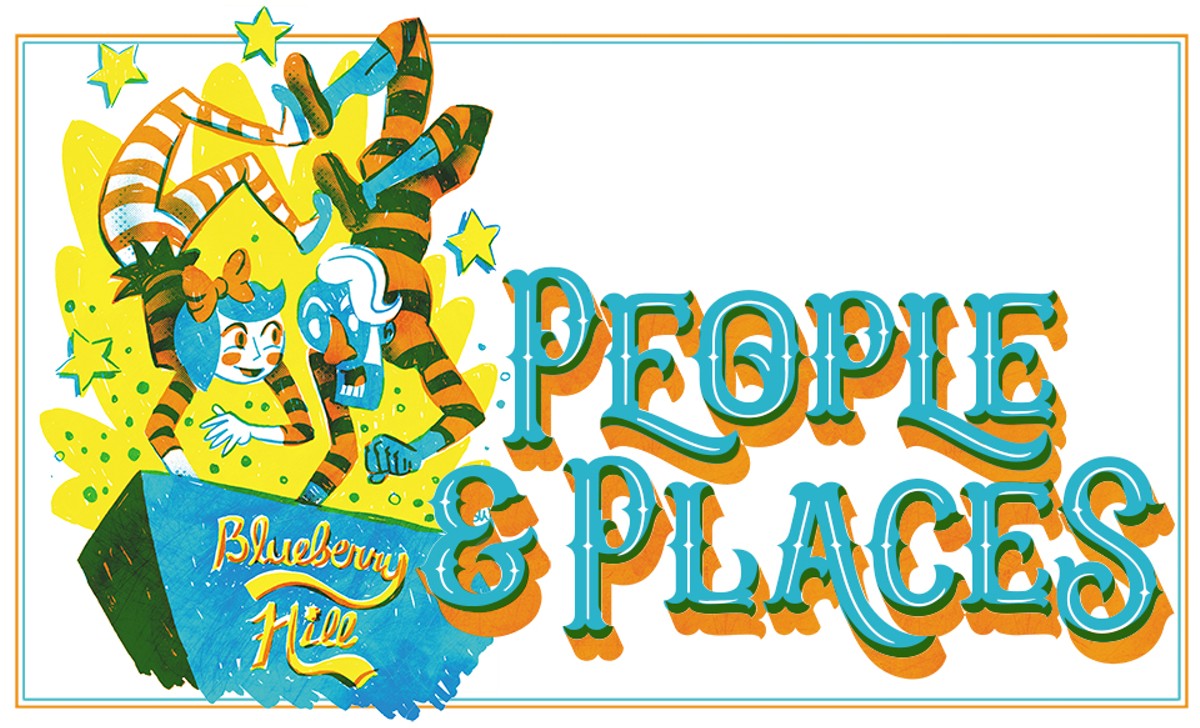 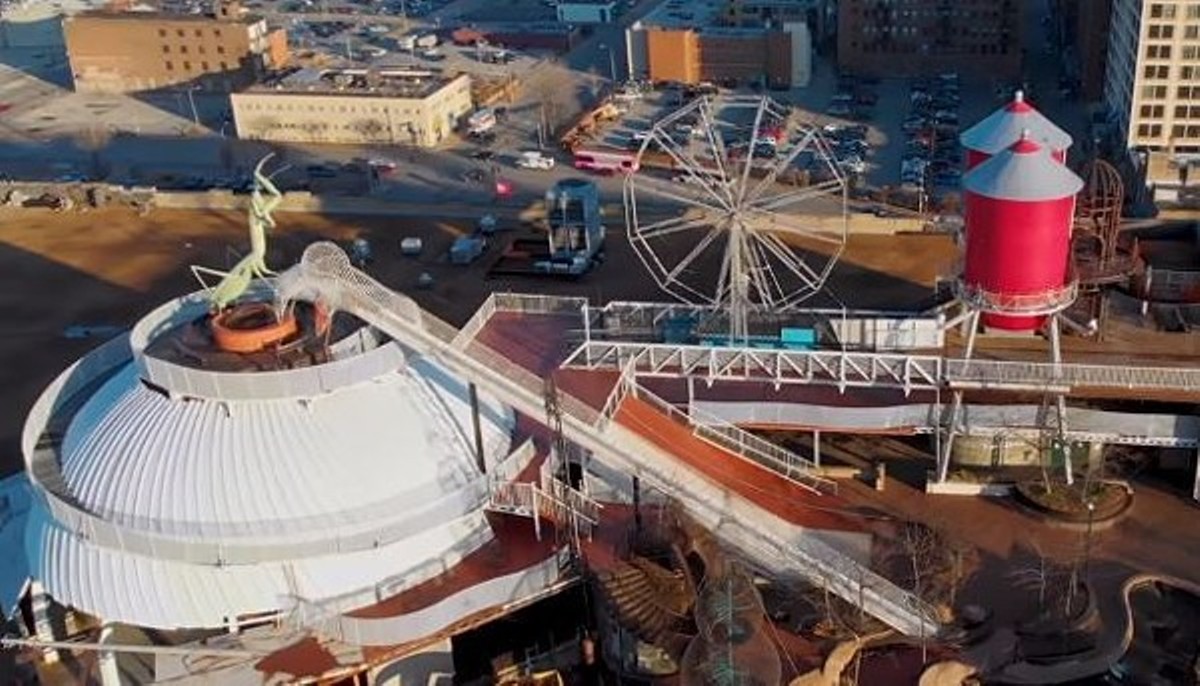 There are two moves here, and both can be executed at the top of the ten-story spiral slide. Your first option is to explain the various reasons why this is not working for you and will not work for you in the future. Be kind but direct. This is not a time for waffling. When you're done, drop into your ready-made escape hatch, yelling "wheeee!" all the way to freedom. The second option is similar, but in this version, you let your flickering flame climb into the mouth of the slide, lean down and just as you give this ill-suited match a little nudge into the void, whisper, "It's over." Step out of line and go get yourself a grilled cheese at Beatnik Bob's. 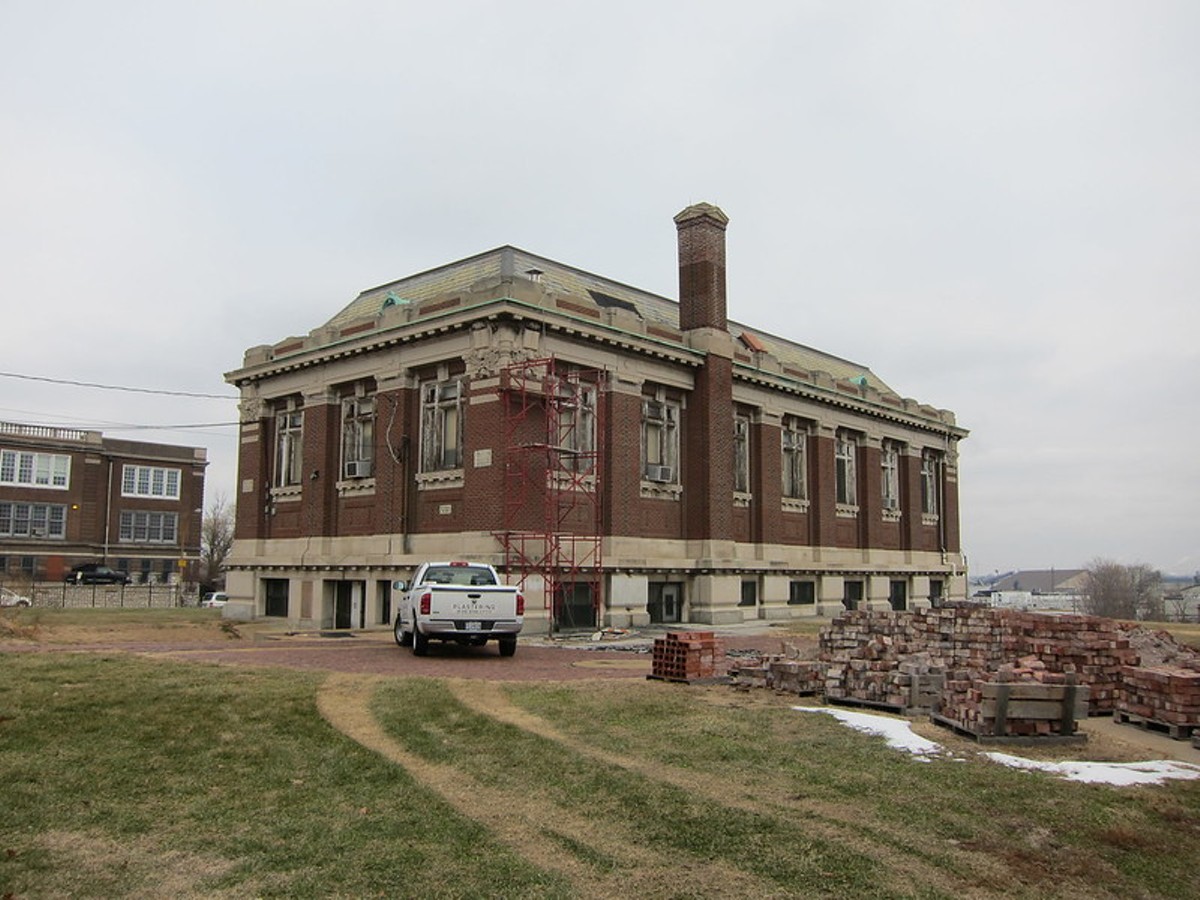 The old Divoll Branch Library in Hyde Park, constructed in 1909, is one of five surviving Carnegie libraries in St. Louis. Named after Ira Divoll, "the father of public libraries in St. Louis" and superintendent for the St. Louis Public Schools in the 1860s, it was one of the first in the country to feature children's books.

While the library closed in 1965, it is currently undergoing restoration, with plans to create an arts and sciences museum in the space. And keeping watch over the old library is the Corinthian Grand Avenue Water Tower.

To be clear, it is an act. Eric Greitens may have dropped out of sight following his scandalous exit from the job of governor, but you know that weasel is still out there, planning his come back. He has already begun seeding the outline of a campaign-ready narrative, starting with his resignation speech in which he painted his departure as an honorable sacrifice to stop the "endless personal attacks designed to cause maximum damage to family and friends" — and not a hide-saving political calculation. In his ensuing life in exile, he has masterfully avoided the trap of attention seeking that further cheapens many a disgraced politico (cough, Chris Christie, cough), who lingers pathetically at the edge of the spotlight, begging for a way back in. Instead, Greitens has remained nearly silent, allowing second-hand accounts of him spending time with his kids and news reports of his return to action with the Navy to work on the public consciousness. Just remember, when he finally re-emerges, casting himself as a humbled but rededicated public servant, he was just biding his time. 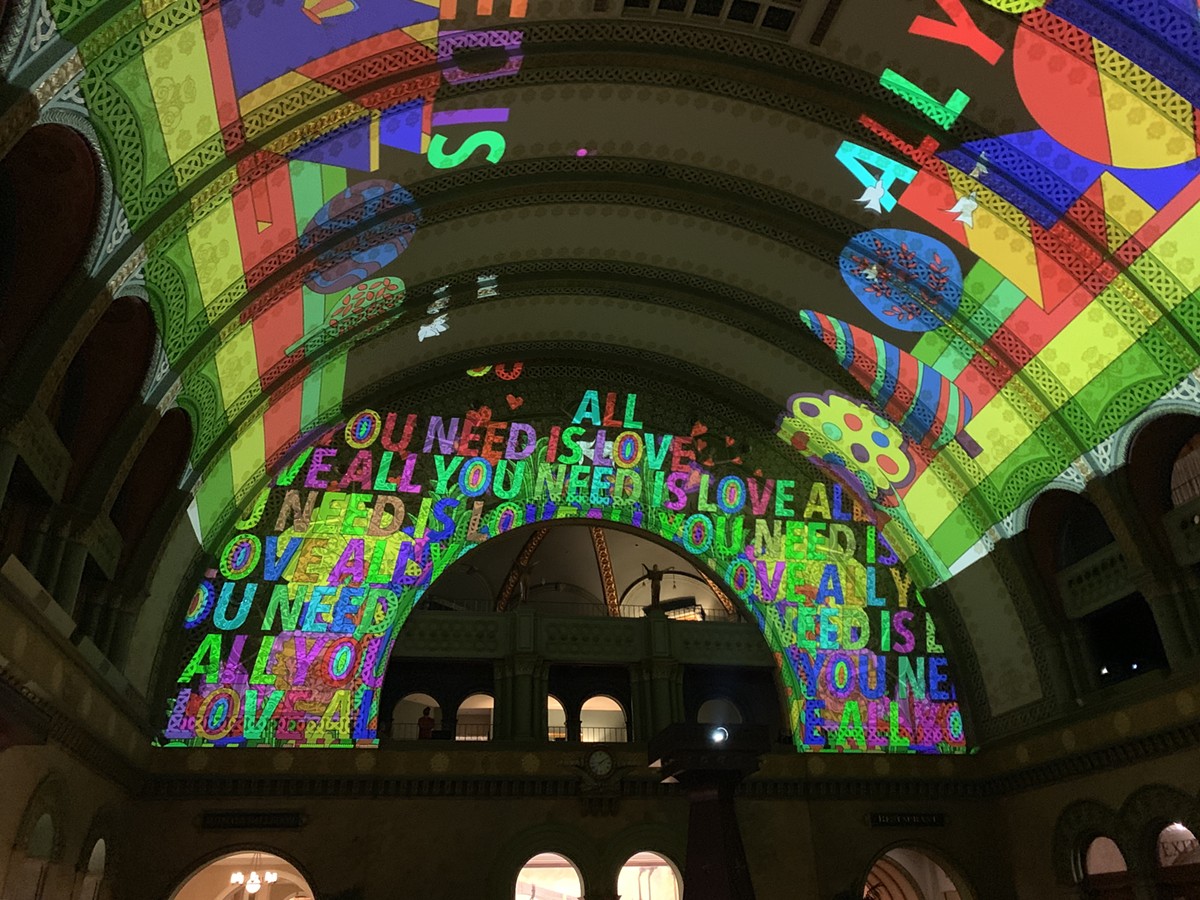 First dates can be so awkward. Where do you go? What do you talk about? And on a first date, you don't want to come off as cheap, but you don't want to spend too much money either. How do you balance all of this? Well, to solve all of these problems, hit up the Grand Hall at Union Station. It's the perfect destination for a first date. The beauty of the space will give you a conversation topic. You can show up knowledgeable about the history of the place, or you and your date can learn about the gorgeous space together from one of the spectacular videos that is projected onto the ceiling once per hour. The place is impressive, and the prices are more than fair for such an grand experience. Do it up right at the Grand Hall. 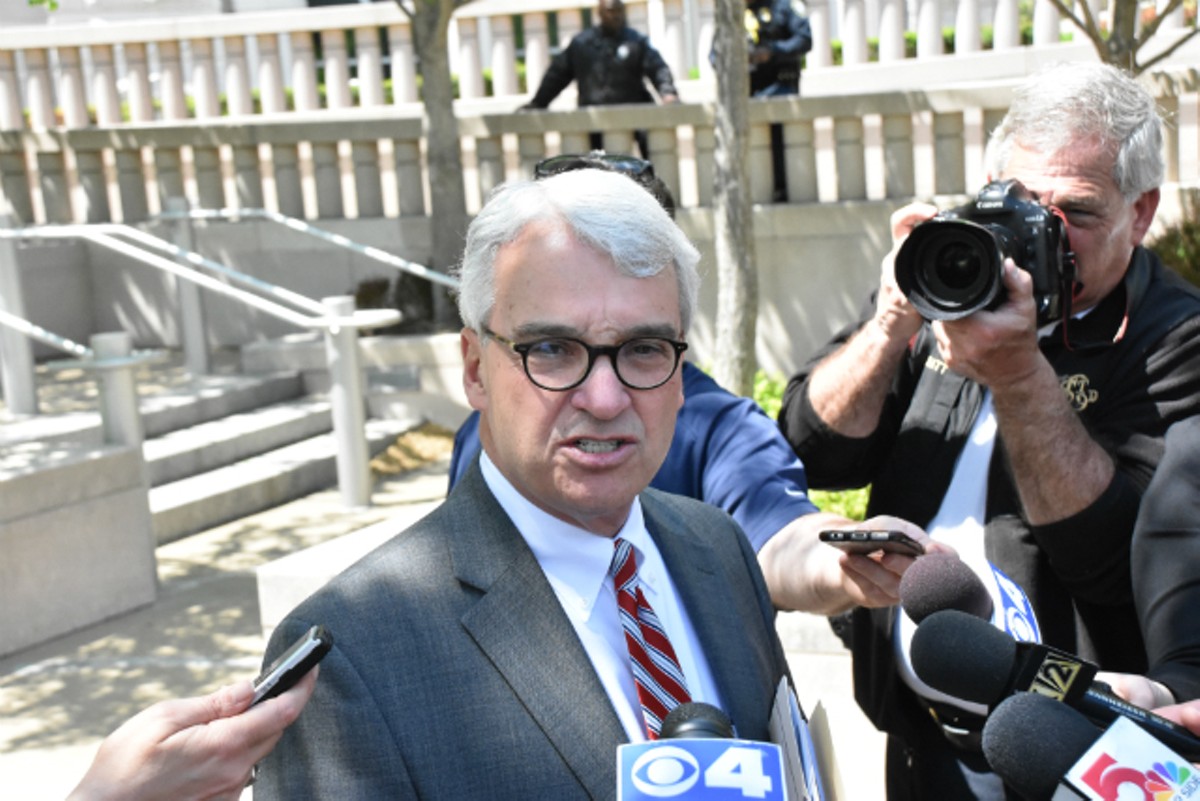 In the end, Steve Stenger and his corrupt circle of enablers have only themselves to blame for their delicious transformation from swaggering assholes to contrite schoolchildren called in front of the principal. But something tells us that as they're sitting in federal prison in South Dakota or popping in to see parole officers in St. Louis, they will think a little about Hal Goldsmith. The assistant United States attorney returned from a brief stint in private practice with white-shoe law firm Bryan Cave to prosecute the ex-county executive in a staggering case that is already a classic of political corruption. So thoroughly was Stenger nailed that he did not even put on the pretense of going to trial. He was indicted and resigned as county executive in the same day. He pleaded guilty to three federal felonies within the week. Why? Because Goldsmith was standing there with piles of transcripts, financial records and campaign documents — and because Goldsmith definitely knows how to use them. The crazy part is that we've only seen what the longtime prosecutor has dribbled out in the charging documents and sentencing memos filed in federal court. Glorious as those bits of recorded conversations were, Stenger knew Goldsmith had so much more and is not prone to bluffing. The now-ex-county executive made the right call.

It's been a banner year for reckonings in the St. Louis Metropolitan Police Department, and amid stories of bad cops making bigoted Facebook posts and other bad cops bragging about beating protesters, it was the voice of a good cop, Sgt. Heather Taylor, which rose to meet the occasion. Are there white supremacists on the police force? "Yes," she said, shocking a CBS News reporter with the speed of her answer. She finished the interview by blasting the department's "optional" implicit bias training. Taylor is blunt, to be sure, but her activism isn't the same as those who take to the streets to protest the police. Taylor is a twenty-year veteran of the force and the president of the Ethical Society of Police, which represents a membership primarily of black officers in the region. In that role, Taylor has walked a narrow line between cop and activist: One week she's blasting a police shooting as a murder, the next week she's tweeting heartfelt reflections about child homicides or an officer killed in the line of duty. In Twitter threads, she describes the experience of confronting armed suspects and refusing to shoot, and, in other cases, facing protests herself for her actions on duty. "We've murdered innocent people," she wrote of the department, "but not all police shootings are murder." It's not a message you'll find on protest signs or in a pro-cop Facebook page. For Taylor, though, being the conscience of the St. Louis police force has taken its toll. In a September tweet, she announced her plan to retire in 2020 and cited the ethical intransigence of those who "refuse to fight for what's right and call out wrong whether it's an officer or citizen." Taylor may be leaving the department, but she's leaving behind an example for everyone, those with badges and without. She's shown what it takes to protect the innocent and serve justice, a combination of an activist's courage and a cop's ethics, an activist's outrage and a cop's understanding. In Taylor, those elements combined into that thing every city needs more of: a force for good.

There are plenty of places in St. Louis to entertain your kids, and many of them are even free. But most of them are completely unsuitable for a kid's birthday party. For a birthday party, you need food. And decorations. And fun. And you also need an enclosed space so you don't lose someone else's child. At Incredible Pizza you can have all of that and more. This warehouse-sized party palace boasts indoor go-karts, rooms full of arcade games and a 150-item buffet that includes kid favorites like pizza, brownies, hot dogs, pasta and mac and cheese. Birthday party packages with per-person pricing are available, too, so you can skip all of the planning and just show up with the rugrats and get to partying. 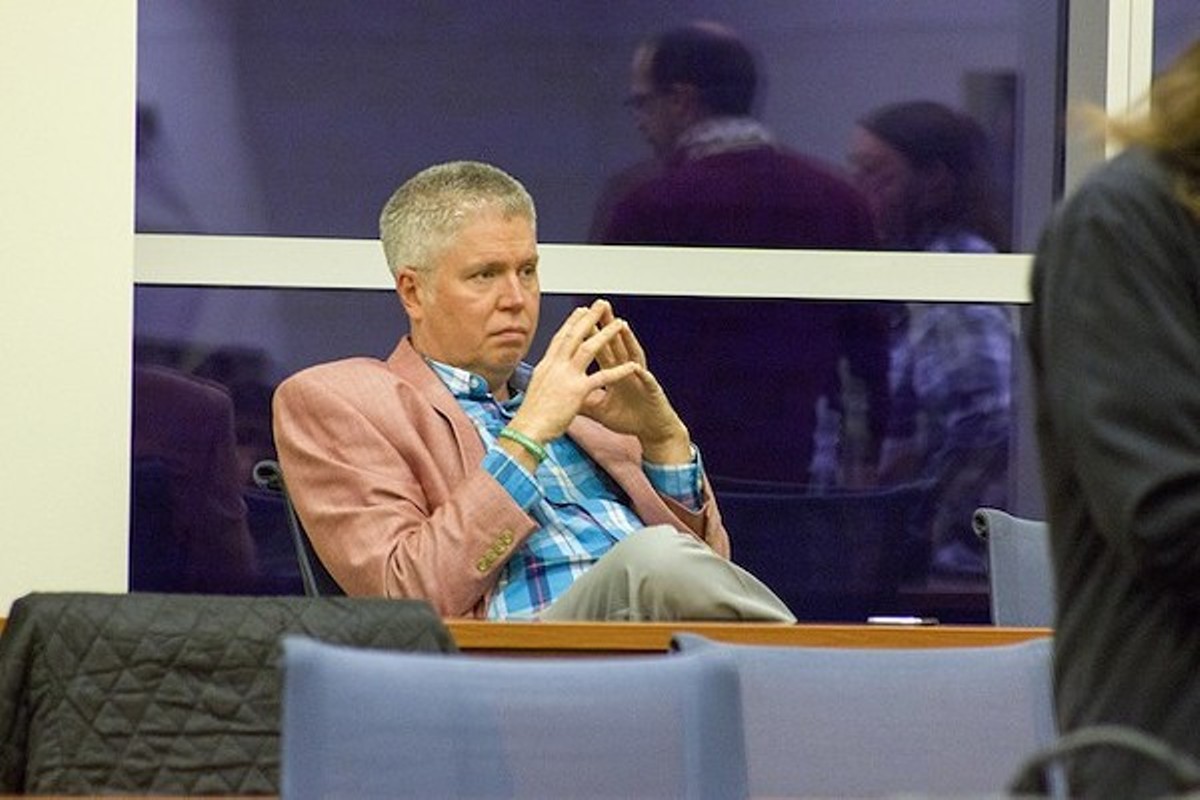 Jeff Roorda, a former police officer who was fired from the Arnold Police Department back in 2001 for making false statements and filing false reports, has spent many of the years since losing various runs for public office, defending police brutality and generally being a big red puffy zit on the face of the St. Louis area. As business manager for the St. Louis Police Officers Association, he gained national prominence after the death of Ferguson teen Michael Brown by acting as a loud bloviating jackass at every available opportunity, sporting an "I am Darren Wilson" bracelet at a meeting of the St. Louis Board of Aldermen and even writing an unreadable book laughably titled Ferghanistan in an attempt to profit off of the death of a young black kid. Classy stuff. This year Roorda has stayed on his bullshit, encouraging officers in the union to sport the Punisher logo on social media (because what better representation is there of the police than as a vigilante force that operates outside of the rules of law and regularly fires its guns indiscriminately) and even took the occasion of the five-year anniversary of Brown's death to publicly wish his killer, Darren Wilson, a "happy alive day." In short, Roorda is a dick, was a dick and will remain a dick. We should retire this category.