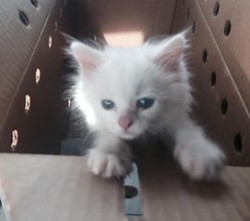 Frank Sinatra, a seven-week-old white long-hair kitten, is safe and sound in House Spring's Open Door Animal Sanctuary after he was stolen and then returned by a kitten thief.

"By [Thursday] night, the guilty party had come back," says Tracy Quackenbush, the executive director of Open Door Animal Sanctuary. "They realized what they did was wrong."

Quackenbush promised to protect the identity of the guilty party. As long as the kitten was returned, Quackenbush said, all is forgiven.

But whoever took little Frankie seems to have as much of a problem telling the truth as they do with taking things that don't belong to them.

"They didn't come clean," Quackenbush says. "They came up with a story. I acted like I believed it. My priority, of course, was getting the kitten back."

Quackenbush says Frank Sinatra was stolen Wednesday afternoon during a particularly busy day, and the shelter posted on Facebook that it was offering a "huge reward" for information leading to the cat's return:

Losing Frank Sinatra was particularly upsetting because he'd already been promised to a woman whose cat had died after she'd owned it for eighteen years. He also has a bacterial infection, and shelter workers were worried the thief wouldn't provide the daily medicine and special diet the kitten needed.

"She just fell head-over-heels in love with it," Quackenbush says. So when the shelter told her the cat had been stolen, "she had a nervous breakdown. Finding the kitten was imperative to us, not just for the kitten's sake because he needed the meds and special diet, but for this lady's well-being."