5 Things That May Surprise You About St. Louis' Ranch Dressing-Themed Restaurant, Twisted Ranch 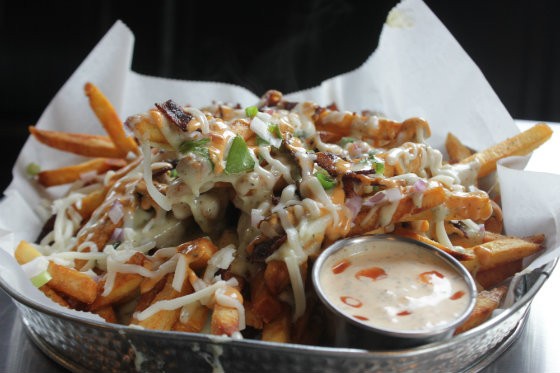 Photo by Sarah Fenske
Loaded fries at Twisted Ranch -- with a side of ranch, natch.

Apparently that's what happens when you decide your restaurant's theme is ranch dressing. America loves the stuff. Food snobs love to hate the stuff. Everybody has an opinion.

Next Tuesday the subject of all that press coverage, Twisted Ranch (1730 South Eighth Street), finally opens its doors. And after getting a sneak peek this week, we can confidently say it's not the apocalypse that food writers have been predicting. It's not going to win a James Beard Award, but it may well prove wildly popular with families looking for a spot to grab a meal before heading to a Cardinals game -- or even just Soulard drinkers trying to sober up with a huge plate of loaded fries, ranch on the side.

Here are the five things that most surprised us about the soon-to-open Soulard eatery.

Since then, Johnathan Tinker has come on board. A veteran of Salted Pig and Sugo's, he remembers being shown some of the early press coverage by a friend -- and picturing a fondue set bubbling with ranch dressing: "That would be crazy."

Now, he says, he's excited to use ranch in subtle ways. "I want to incorporate the flavors of ranch in a way that's very well-balanced," he says. "I like to do it subtly throughout the process." That means sixteen different spins on ranch dipping sauces, from Thai to smoked paprika. That means a house ranch -- buttermilk basil -- with real basil taste.

The menu has a limited number of entrees (the restaurateurs know their audience, and appetizers are almost certainly where it's at), but Tinker's favorite dish is a double-bone-in pork chop. It's ranch brined and seasoned, but it's also cooked sous vide to bring out the meat's tenderness.

Tinker has aimed to bring a similar care throughout the menu, ranch-filled though it is: The fries haven't just fallen off a Sysco truck. Instead, they're made from real potatoes -- even if they are brined in a ranch mix. And tossed in ranch seasoning. And served with ranch dressing on the side.

Photo by Sarah Fenske
Co-owners Allen and Hayden did the renovations themselves.

2. The place is downright attractive Co-owners Allen and Hayden know what you've imagined: a dining room with big tubs of ranch everywhere. Or maybe even the ranch fondue set of Tinker's nightmares.

They haven't gone that route. Formerly Sassy Jac's, Twisted Ranch has a tasteful interior, with stainless steel tables and clean lines. That vintage-looking St. Louis sign? The co-owners found it at an antique mall and then added the bulbs themselves.

The decor gives another clue: The highchairs in the corner are a clear sign that it's meant to be family-friendly. Who loves ranch dressing more than kids? 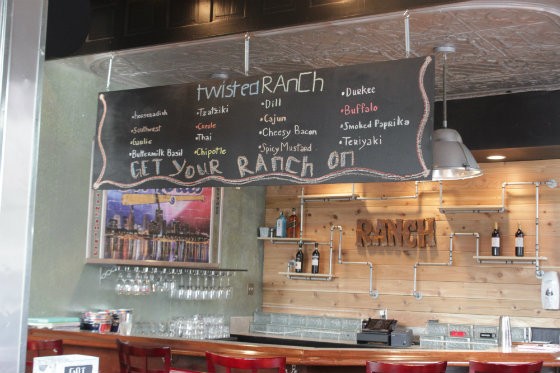 Photo by Sarah Fenske
Twisted Ranch offers sixteen different variations on ranch for dipping sauces. The house is a buttermilk basil; smoked paprika is the one that's currently blowing the owners away.

3. They're damn serious about loving ranch dressing. OK, so the menu is trying for surprising subtlety, and the decor is attractive. That doesn't mean they're luring customers under false pretenses. While both co-owners have a background in tech, this isn't just a concept they came up with via focus groups looking for something that would test well in the heartland. The restaurant springs from Chad Allen's sincere (and deep) love of Ranch.

It hardly makes him unique, though he is almost certainly the first to build a restaurant on that love.

"We didn't want something run-of-the-mill," he explains. "We wanted something catchy." When they were talking about what that meant in the context of those theme-park-style restaurants in Las Vegas and New York, Allen joked, "Well, I really love to force ranch dressing on people."

"After we started dabbling into the menu, we realized it could be fun," Hayden says. The rest is history. They hired their chef in part because he, too, loves ranch ("I dip everything from hot dogs to chicken nuggets in ranch," Tinker admits). They've also made sure to hire servers who like ranch -- they want them to be able to describe the highlights honestly.

Neither Hayden nor Allen is quitting his day job, but they're definitely all-in. 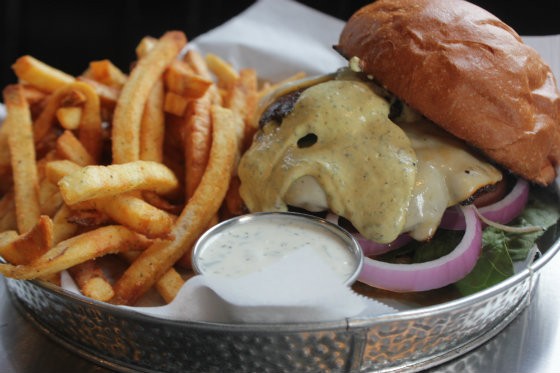 Photo by Sarah Fenske
The burger and fries at Twisted Ranch -- co-owner Jim Hayden's favorite thing on the menu. The burger comes topped with Munster and mustard; the ranch is on the side.

4. They know you're laughing, but they're laughing with you. Initially, the press coverage shocked them. "We got calls from Oregon, New York, Washington, D.C. -- and we had literally just gone in to apply for the liquor licenses," Hayden recalls.

But while the tone was incredulous at best, mocking at worst, it never occurred to the co-owners to be insulted. "It was funny, it was crazy, it was a good thing," Hayden says.

In recent weeks, they've had numerous customers trying to open the doors -- people are genuinely curious about what they're up to. And if they can convert even a handful of the curiosity-seekers into regulars, well, they're starting off better than most new restaurants.

5. They're also insane. Because, let's face it, the concept is insane. Ranch dressing? In every single dish on the menu (except, OK, the dessert)? And did we mention they're serving a ranch -flavored vodka? Ranch-flavored vodka?

They see it as an excellent choice for a bloody mary, but we can just see some Soulard drunk buying shots for the house. Ranch-flavored shots!

So what can we say? Only time will tell. Twisted Ranch might be every bit as bad as Deadspin predicts. But judging from pre-opening buzz alone, this is an adventure America is dying to hear you tweet about. And isn't that reason enough to stop by and see the place for yourself?

Photo by Sarah Fenske
Twisted Ranch is located in the old Sassy Jac's spot in the heart of Soulard.

Editor's note: A previous version of this story reported that Johnathan Tinker was a "veteran" of Corner Pub and Grill. According to that restaurant's owner, he was only on staff there very briefly. We regret the error.

We welcome tips and feedback. Contact the writer via email at [email protected]