Our weekly roundup of some of our favorite St. Louis dishes. 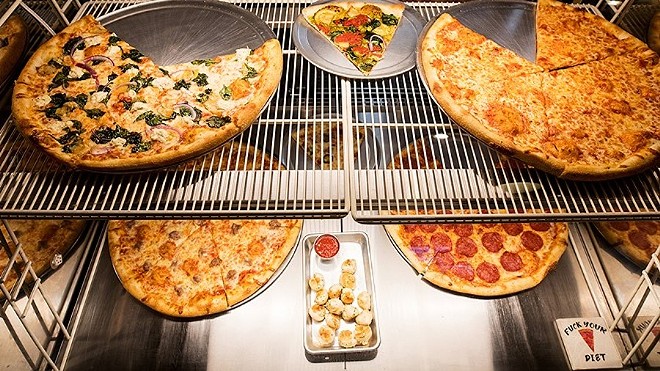 Mabel Suen
A selection of slices from Pie Guy, one of our critic's picks for respectable New York style pizza in St. Louis.

Contrary to popular belief, there is more to pizza in St. Louis than Provel-covered squares. The last few years have been filled with examples of Neapolitan perfection as Italian kitchens around town fire up blazing-hot ovens to deliver us to quality wood-fired pies. However, when it comes to New York-style pizza — what one might argue is the quintessence of the American form — St. Louis has a reputation as having a dearth of slices, at least if you ask any East Coast transplant. These five places offer a delicious counterpoint to that narrative.

Pie Guy
For the past four years, Mitch Frost has been serving up excellent New York-style slices at his Grove hot spot, Pie Guy (4189 Manchester Avenue, 314-899-0444). Frost's pies capture that greasy ease of the Big Apple's grab-and-go joints, though they actually are a reflection of his painstaking research and experimentation.

Pizza Head
Punk-rock vibes permeate Pizza Head's (3196 South Grand Boulevard, 314-266-5400) South Grand storefront, capturing the big city's pizza game as much as its East Village's music vibe — though it's hard to be angsty when you're noshing on the amazing white pie with spinach and artichokes.

Racanelli's
A local staple since the mid-'90s, Racanelli's (multiple locations including 8161 Big Bend Boulevard, Webster Groves; 314-963-1111) is synonymous with New York-style pie in St. Louis thanks to owner John Racanelli's family's Italian American restaurant background, which traces its roots to the Bronx.

Pizza-A-Go-Go
Founder Frank LaFata opened the original Pizza-A-Go-Go (6703 Scanlan Avenue, 314-781-1234) in 1967 in an old Gaslight Square bar called Whiskey-A-Go-Go, which is how the spot got its name. Since then, it's been one of the city's most beloved New York-style pizzerias.

La Pizza
Ask any New York transplant where to go for pizza, and after they stop laughing, they will all have the same answer: La Pizza (8137 Delmar Boulevard, University City; 314-725-1230). The tiny University City shop is the area's gold standard, which is why calling ahead is a must.