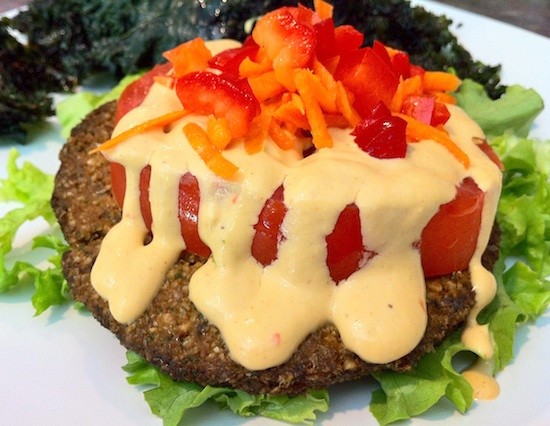 St. Louis is no stranger to veggie burgers -- from the divine at SweetArt to the pedestrian at too many places -- and it's important to understand this context. In fact, the owners of PuraVegan first started making veggie burgers at their old restaurant, VegaDeli, and they've been perfecting this raw recipe ever since. The point here is that if you're going to be slinging veggie burger into the St. Louis foray, you'd better bring a big stick.

Not one to shy away from a challenge, PuraVegan (307 Belt Avenue; 314-282-5834) has delivered a truly exceptional patty. As one would expect, there are vegetables everywhere, with mushrooms, zucchini, carrots and a blend of herbs and spices holding the patty together, and tomatoes, lettuce, red cabbage and a whole slew of other veggies resting on top. So, yeah, this sandwich is about as healthy as you'll find, particularly considering that many of the ingredients come from PuraVegan's own hydroponic garden.

What really cements this veggie burger in our Gut Check Favorites list is the homemade cashew cheese. It's rich and decadent, with a consistency reminiscent of nacho cheese. Of course, this "cheese" is raw, too, so the temperature rests just below 115 degrees, but there's plenty of comforting warmth here to convince you that, just maybe, food doesn't need to be cooked in Hell's furnace to be devilishly good.

Beginning last year, RFT restaurant critic Ian Froeb counted down -- in no particular order -- 100 of his favorite dishes in St. Louis. Now Gut Check has taken up where he left off. Check back frequently as we detail our 100 favorites, and don't hesitate to send us yours, too, either via the comments thread or at [email protected].