Adventures in Butter-Churning, Courtesy of The Wilder Life

Two iconic symbols of Little House on the Prairie: A sunbonnet (worn by Pudd'nhead Books children's buyer Melissa Posten) and a butter churn.

If you've ever read any of the Little House on the Prairie books by Laura Ingalls Wilder, even if it was more than a quarter-century ago, some things stick with you. Maybe it's just Gut Check, but for us, most of these things are related to food: pouring molasses on a pan of snow to make candy, butchering a pig and savoring the crisp-roasted tail, apple pie for breakfast, a doughnut jar in the kitchen, vanity cakes at a party, one piece of candy to be savored every Christmas.

Most of all there is butter churning. When Wendy McClure started writing The Wilder Life, her memoir about her travels through what she calls "Laura World," one of the first things she did was purchase a butter churn via eBay, which, as she informed a crowd of about 35 Little House fans Monday night at the Schlafly branch of the St. Louis Public Library, is harder than one might think. Particularly if you want a crock-and-dash churn like the kind Laura Ingalls used as a girl.

Laura's husband Almanzo Wilder later bought her a newfangled Dazey churn, which operated with a crank, but Laura gave it a mighty kick and sent it flying out into the farmyard.

Yep, crock-and-dash was definitely the way to go. And fortunately a loyal friend of Pudd'nhead Books, which sponsored the reading, provided a churn for the evening, as well as a bale of hay for twisting into hay sticks for fuel, just like the Ingalls family did in The Long Winter.

But good news for aspiring homesteaders out there: You don't actually need a churn to make your own butter, though it does look cool. You can just take a jar full of cream and shake it really hard. (Or you can use a KitchenAid mixer, if you don't mind losing the element of pioneer-era charm.)

As McClure prepared to read from her book about her own adventures in butter churning -- turns out it takes only about 25 minutes to churn a crock, shorter than one episode of the Little House on the Prairie TV show -- she sent a sealed jar of cream out into the audience. Butter making was to be a group enterprise.

After two circuits through the crowd -- and a trivia contest and question-and-answer session -- the jar contained actual butter. It was like magic! (A few brave volunteers also churned. They could scarcely contain their excitement, as you do when you're using an actual butter churn.) 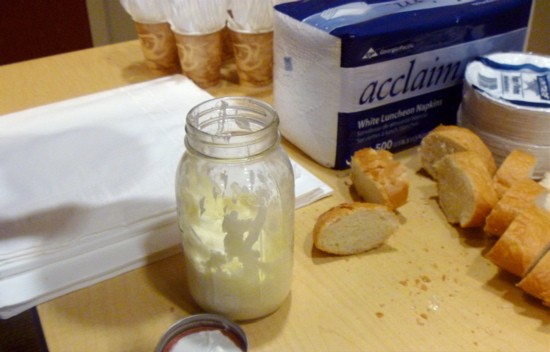 I can't believe it's butter!

True, it was lighter than store-bought (or "boughten," in Wilder lexicon) butter, and paler, but it spread far more easily. And it tasted pretty good.

Loyal readers: Just remember, here's something you can do when you're really, really bored.

McClure also provided a pan of brownies using Laura's own recipe, as recorded in The Little House Cookbook. They were fudgy and delicious. They were not, however, made with home-churned butter.