All Growed Up: Cafe Natasha's celebrates its 30th year with a laudable rejuvenation 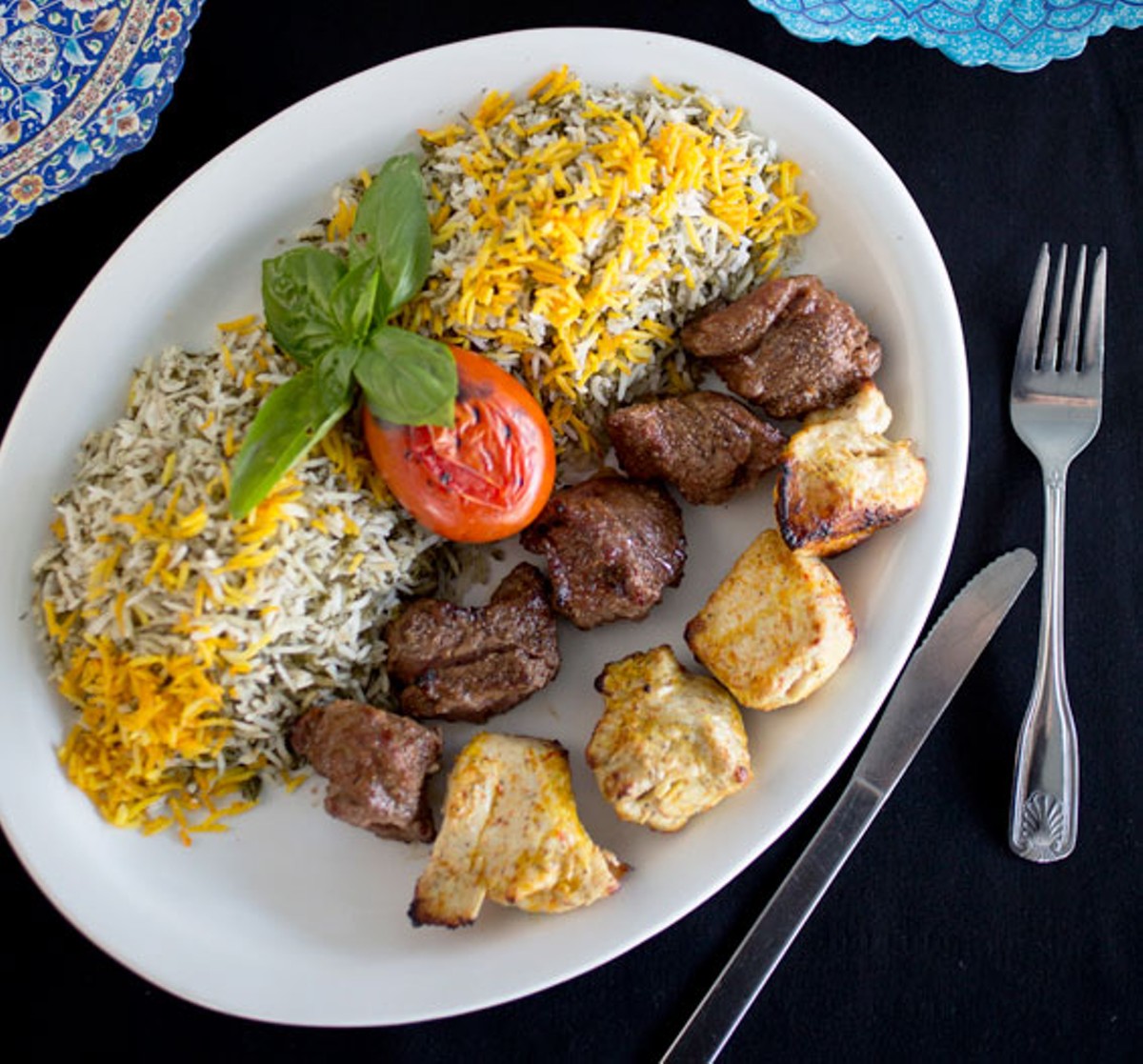 All Growed Up: Cafe Natasha's celebrates its 30th year with a laudable rejuvenation

As Natasha fluttered about the newly renovated dining room, personalizing the meals of each and every patron, I noticed she was pulled aside by a party of two.

"I used to work here when I was fifteen, you know," the now thirtysomething man said. "I was barely old enough to work, and my mom marched me down to Delmar and made me get a job."

What followed was an exchange typical of that seen every night at Cafe Natasha's: Long-time loyalists, former employees and newly initiated regulars gather at the Bahramis' table, not only to experience some of the most delicious cuisine this city has to offer, but to pay respects to the family for keeping the tradition going for as long as they have. When a restaurant has been around for 30 years, as Cafe Natasha's has, patrons are more than customers.

Thirty years? As anyone with even a hint of knowledge about the industry can attest, restaurant years are like dog years. After two a place is a well-established success; after five it's an institution. Thirty years is virtually unheard of in the business. When the Bahramis opened the seed that would become Cafe Natasha's, Ronald Reagan was president, Michael Jackson was debuting the moonwalk and the last episode of M*A*S*H was airing on our not-nearly-HD television sets.

The 30-year milestone marks a reinvention for Cafe Natasha's, as Mom and Pop hand over the reins to the restaurant's namesake. The toddler who crawled across the floor at the family-owned lunch counter is now poised to take the restaurant into the future. With a fresh renovation, a vigorous social-media campaign and reimagined dishes (don't worry, the old favorites will always be there), the elder Bahramis have passed the torch to the next generation.

What does reinvention taste like? Natasha doesn't feel pressured to re-create the menu, although she has mixed in a few new items to shake things up a bit. Take the tart pomegranate eggplant appetizer, inspired by the flavors she discovered while studying in Lebanon. For those who think baba gannoujh needs a makeover, the pomegranate eggplant is the dip's sophisticated alter ego. Here the main ingredient is grilled and then roasted, begetting a deep smokiness. The addition of charred tomatoes and slivers of garlic juice up the eggplant's richness, while a scattering of chickpeas contributes welcome texture. A pomegranate molasses drizzle brings mouth-puckering tartness to the table.

The homemade yogurt dip (by which I mean the yogurt — yes, the yogurt — is homemade) is not a new dish, but it deserves to be lauded because it is positively transcendent. Hamishe's (that's Mama Bahrami) diligent straining of the yogurt creates a creamy thickness that puts even the priciest of Greek yogurts to shame. Coupled with a vampire's-nightmare quantity of garlic and a simple olive-oil drizzle, the yogurt dip electrifies the mouth with its tang. Although I'm not sure if this is the traditional Persian way to do things, we sprinkled a little shirazi (a salad of diced tomatoes, onions, cucumbers, and fresh herbs) on top for some juicy zip. Let's just say we were pleased with our Persian pizza, as those seated at the fifteen tables within earshot can attest.

The lamb chops made the restaurant famous, but the lamb biryani is itself a worthy dish. The Bahramis stew the lamb for 24 hours in a secret concoction of broth and herbs (all the patriarch Beshid will say, rather vociferously, is that Iranians do not like most of the lamb commonly available in America, so he had to think of a way to make it taste more like home), resulting in mild, pull-apart meat that could trick even the most avowed non-lamb eaters with its lack of gaminess. The lamb, and a little of its cooking liquid, are sprinkled atop a warm pillow of cumin- and chickpea-spiked basmati rice. As served, the biryani is good, but take Natasha's advice and mix a little sumac and grilled tomato with the rice to brighten up the lamb's stewed richness.

Now, I'm not sure what magnificent nectar Cafe Natasha's uses to marinate its beef shish kebabs, and the Bahramis will never tell. Whatever the ingredients are, they make for what might be the most flavorful piece of meat I've eaten in all of my life. The tender chunks of sirloin burst in the mouth with a garlicky savoriness punctuated with a whisper of sweetness and black pepper. They're cooked over open flame, and the residual marinade forms a char that crisps the edges with a pleasant earthy bitterness. The kebabs are served over a simple bed of saffron basmati rice, the long grain's floral notes, coupled with juicy grilled plum tomatoes, bringing out the marinade's subtle sweetness. This is no mere beef on a skewer — it's a communion with the divine.

With the taste of beef still lingering in our mouths, it was hard to think about dessert. (How can you top nirvana?) We were persuaded, however, when told that Hamishe's pies could take the blue ribbon at any red-blooded American state fair. The cream-cheese pie with seasonal berries is a decadent example of her craft. Anyone can do a cheesecake, but Hamishe's is less dense — think creamy and light, like a cross between whipped cream and cheesecake — with tart, macerated berries. The Persian ice cream also caught our eye, and we were fascinated by flavors of pistachio, saffron and rose water folded into the vanilla canvas. The result was as if vanilla ice cream had gone on a vacation to the East and came back adorned with exotic jewels.

So I'm saying I liked Cafe Natasha's, right? You might say that, just as you could say the Taj Mahal is a nice building. Cafe Natasha's brought forth from its venerable kitchen one of the best meals I've had in recent memory. It's hard to wrap your head around the art of taking the simplest ingredients and elevating them to the realm of inconceivable decadence, but that's what the Bahramis do. Obviously, I'm not the only one who has noticed — as 30 years at the top of the restaurant game clearly attest.