Anthony Scarato of Anthonino's Taverna on the Hill

This is part one of Katie Moulton's Chef's Choice profile of chef Anthony Scarato of Anthonino's Taverna on the Hill. Part two, a Q&A with Scarato, is here. Part three, a recipe from Scarato, can be found here. 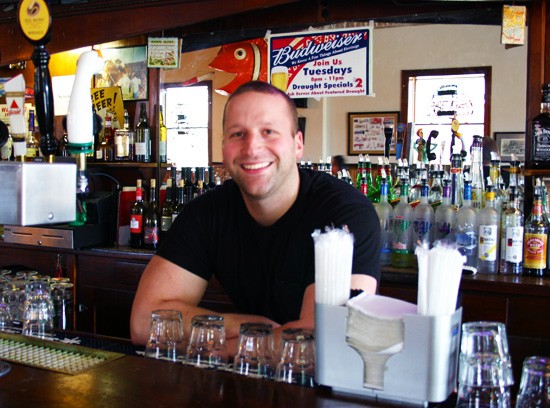 "On the Hill we couldn't be just Italian," says Anthony Scarato of Anthonino's Taverna, where he and brother Rosario combine their parents' Greek and Italian family traditions to do something different.

In creating the menu for Anthonino's (2225 Macklind Avenue, 314-773-4455), which opened in 2003, the Scaratos drew from the heritages of both their mother, who was born in Greece, and their father, whose parents immigrated from Italy. Many of the recipes are for dishes they grew up eating.

"Our sauces and way of doing stuff are totally different from what everyone around here does," Scarato says, noting that Anthonino's marinara sauce, made fresh in-house with fresh tomatoes, is slightly thinner than other marinaras and not overly sweet. Anthonino's pizzas, which have received much applause, are hand-tossed as opposed to thin crust, and feature a provolone/mozzarella mix instead of Provel, "so the cheese is stringier with more of a bite to it," Scarato says.

Another item you won't find anywhere else on the Hill? The gyro.

Scarato began restaurant work at the tender age of nine, wiping tables and performing other minimal tasks for his father, who in the early 1980s opened Athens Cafe, a quick-service Greek restaurant with multiple locations. By age sixteen Scarato was working as a line cook, and his culinary course was set.

There doesn't seem to have ever been a question as to whether Scarato would carry on the family business. Still, there are no sacred cows when speaking with Scarato. When asked when he knew the chef's life was for him, Scarato says, "I don't know if it is. It's just working. We fell into it young: If my dad was a plumber, maybe I'd be a plumber. But I know now I wouldn't want to work for somebody else after owning my own place." 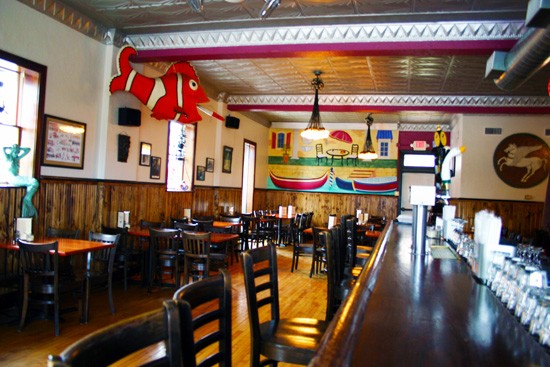 His own place reflects the same down-to-earth attitude, including its décor, which features a giant orange-and-white fish hanging hear the ceiling, and a whimsical mural of European canals. Anthonino's is "more of an Italian restaurant with a Greek twist," Scarato says. "The idea of a taverna is a family-style eatery that's casual and bright and clean with good food. A taverna is typically by some water...but well, it's just a term."

When the brothers purchased it, Scarato says, "This building -- which has been here since 1929, 1930 -- was a dump. Metal door, only front windows, carpet. Everything smelled like a cigarette." Still, Scarato is amused by the building's history -- it once was the Hill Bar & Grill, which had an all-male clientele (it didn't even have a women's restroom), and whose owner was murdered in an adjacent alley in 1996 in a revenge killing. 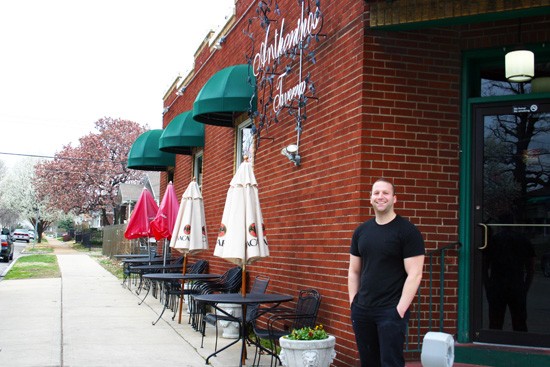 Katie Moulton
Anthonino's site has a checkered past: a decades-old score was settled in blood in the alley to the left.

Scarato spent half his childhood in the city -- "just a little south of here, by Saint Joan of Arc" -- before the family moved to the Lindbergh school district, and he has been invested in the culinary community since he was a teenager. How has St. Louis food culture changed? "[The Hill] hasn't changed," Scarato says. "Elsewhere in the city and county, you see a lot more young chefs now, and there are dishes that you wouldn't have seen on a menu in the past, because of the internet and people moving around more. But I don't think we're behind -- or at least not way behind."

Even steeped in so much tradition, Scarato isn't hesitant about moving forward. "We shake up the menu two to three times a year, adding and removing four or five items each time," Scarato says. "With fish, we went to all-fresh or fresh-frozen at sea. And we stopped with farmed fish, it's all wild-caught."

As for the building itself, plans for expansion are under way: first a large addition on the lot to accommodate private parties and more generally to allow for more diners. Over the next three to five years, Scarato also hopes to build a deck on the restaurant's roof. A rooftop patio would be another first for the neighborhood, and Scarato assures that the "amazing view of the whole city" from that new vantage point is hard to beat.