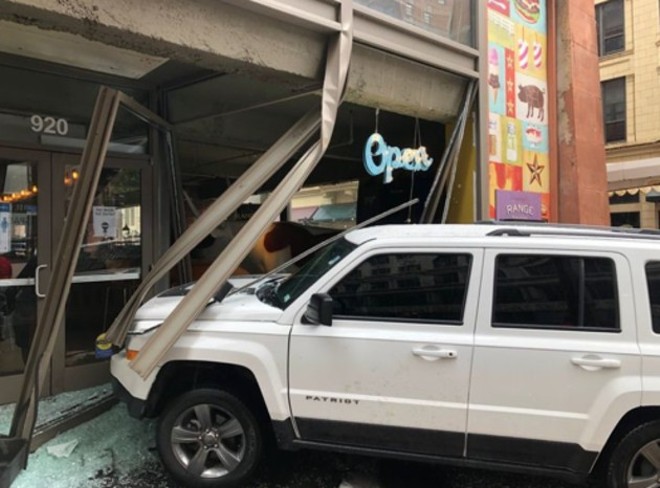 COURTESY OF DAVE BAILEY
A Jeep slammed through the front windows of Bailey's Range on Saturday morning.

A white Jeep Patriot crashed through the front window of downtown restaurant Bailey's Range (920 Olive Street, 314-241-8121) on Saturday morning, shattering the glass and steel facade, as well as the nerves of the staff and patrons inside.

The incident happened at approximately 11:30 a.m., just after the restaurant opened for the day's service. No one inside the restaurant was hurt; it wasn't clear whether the driver of the Jeep was injured.

News of the incident was posted on the Bailey's Range Facebook page that afternoon, though there was no information on the cause of the crash. The restaurant was forced to close for the remainder of the day and evening to clean up and board the windows — a tough pill to swallow considering the year of revenue loss that restaurants have had to endure due to the pandemic.

"It's hard, especially after the past year, to have to turn business away, but we are so grateful to our amazing team and the first responders who were immediately there to help all involved," the post reads.

Rather than dwell on the incident, however, owner Dave Bailey feels extremely fortunate that it did not result in tragedy.

"Everyone has had a hard and emotional year, so we are not about to sweat some broken metal and glass," Bailey says. "We are so thankful no one was hurt."

The popular burger spot reopened for normal business hours on Sunday; Bailey credits the resiliency of his team and the first responders for making that possible.

"We are so grateful for the help from our staff that cleaned up," Bailey says. "From the St. Louis Metropolitan Police Department to the St. Louis Fire Department and St. Louis Streets Division, everyone worked so hard that we were able to reopen back up the next morning."

Beyond the shattered glass, Bailey is hoping that the situation does not shatter the confidence of patrons who might focus on this negative event. Instead, he remains bullish on downtown and sees this as a blip in an otherwise upward trend — one he is confident will continue.

"Downtown is the beating heart of this city," Bailey says. "Vaccines at the dome, baseball back at the stadium, the Wheel, the zoo, the museums, the architecture — all of it. St. Louis is one amazing town."