Bait Stuns With an Upscale Approach to Seafood

On the surface, Kalen Hodgest seems like an unlikely restaurateur. A real estate investor and home health-care service owner by day, he didn't seek out the restaurant business as much as it fell in his lap while he was out looking for properties to house his other endeavors. When he came across the three-story building at 4239 Lindell Boulevard, he figured that it would make a perfect headquarters for his businesses. That it came with a first-floor restaurant space was simply a bonus.

For Hodgest, his strong entrepreneurial spirit drove him to view the arrangement as another business opportunity. A lover of all things seafood, he lamented St. Louis' lack of options, especially ones that evoked the swanky, boutique vibes of the restaurants he liked to frequent on his travels to other cities. Determined to fill this gap in the market, he began making a mental list of all the things that were important to him in a restaurant: fresh, quality fish, dramatic presentation, an upscale, lounge-like atmosphere, good music. Brainstorming his wish list was easy. He thought the hard part would be finding someone with the restaurant know-how to help him bring that vision to life.

But finding the right person turned out to be quite easy. As a regular diner at the former SoHo Restaurant + Lounge in the Grove, Hodgest became well acquainted with its executive chef, Ceaira Jackson. The two connected over food, so it was natural that he'd reach out to her when he decided to launch his own place. Together, they sketched out a menu and crafted a vision, so they would have a winning concept unlike anything else in town when the time was right. 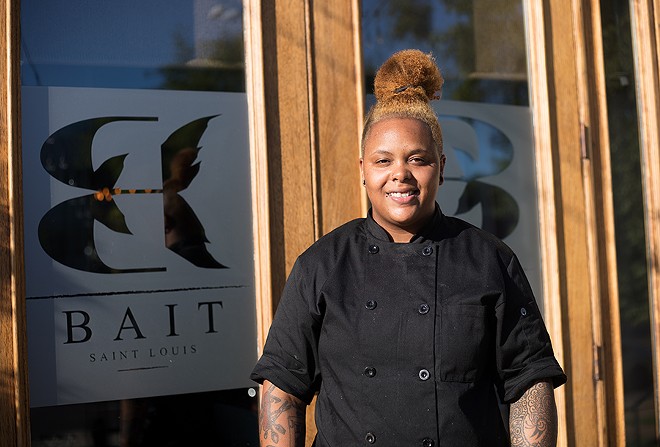 It would take them nearly four years to turn those initial restaurant dreams into Bait. Though Hodgest purchased the building in 2015, it took a long time to close. In the meantime, he was busy running his other businesses while Jackson went on to work at the now-shuttered Fleur de Lilies and launch Culture Catering with Fleur de Lilies co-owner Misha K. Sampson. Through it all, they never gave up on their dream and were finally able to open the doors to Bait this past February.

Hodgest spared no expense when it comes to Bait's aesthetics. True to his vision for a swanky spot, Bait is a monumental departure from the space's former occupants, Sol Lounge and the Grind Coffeehouse. Plush, pastel teal velvet chairs, black marble tables and contemporary artwork hanging from its taupe-colored walls give the feeling that you are dining in someone's elegant home. Chandeliers cast a warm glow throughout the space, and candlelight dances off a glass-fronted wine wall that lines one of the rooms. Even small details come together to create an upscale feel, including gold-colored flatware and elegant glass-covered orchid arrangements. 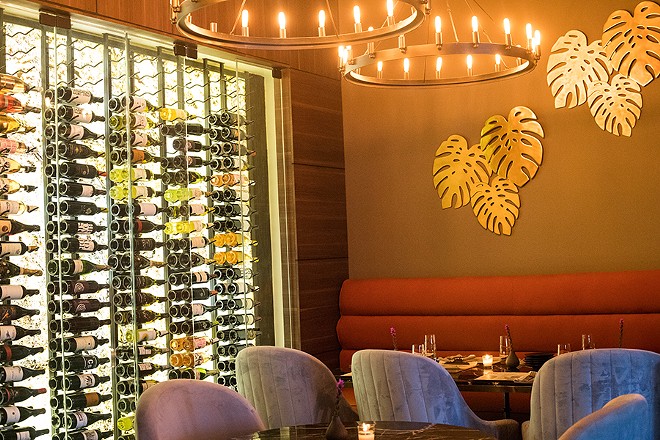 Hodgest describes the environment as a "boutique restaurant," and you understand this description the moment you walk through the doors. The restaurant feels different than any other restaurant in town, not simply because of looks, but because it's the only fine-dining establishment I've encountered with a customer base as diverse as the city itself. It's so refreshing to witness a truly inclusive dining room in an industry that is still, unfortunately, so segregated.

This alone is reason to root for Bait, but its stunning food bolsters the case. Less a seafood restaurant than a temple to the ocean's bounty, Bait dazzles with presentations that come up to the line of over-the-top without ever crossing them. This is because there is substance behind the style. "Flaming Wicked Prawns" are showy — they come out in a flaming cauldron, for goodness' sake. However, their tender flesh bobs in an aromatic rosemary- and ginger-infused beer broth that teems with peppercorns that pop in the mouth. The shellfish is served head-on but halved lengthwise so you get the pleasure of those extra flavor bits without the mess.

Ceviche, one evening's off-the-menu special, is positively electrifying. Large cubes of mahi-mahi are cured with mouth-puckering citrus juice and dressed with slivers of jalapeños and fresh herbs then served with crispy wonton strips for dipping. The fish is meaty and shockingly fresh — a dish so outstanding you'd swear you were eating it beachside and not in the middle of the heartland.

Shoestring fries, covered with lobster meat and Cajun-inflected aioli, are a delicious first course. My one complaint is that they needed more lobster meat. The crab cake did not have that issue. Though I prefer the colossal hunks of a Maryland-style version, this one was loaded with lump crab meat with only minimal breading and thankfully tasted fresh (as opposed to that tinny flavor that so is often present in canned crab meat). A subtle back beat of Cajun spice permeated the crab cake, which was a nice complement to the accompanying black bean and corn salsa.

Duck Rangoon may be a departure from the seafood theme, but it is a worthy offering on Bait's appetizer menu. The meat is bound with cream cheese, not overtaken by it. The result is a filling that is akin to duck rillettes, its richness cut with a bright mango-chili dipping sauce.

Bait's main courses range from sandwiches to full-blown seafood feasts, each one more impressive than the next. Alligator tacos are more than just a novelty; the tender, "tastes like chicken" meat is battered and overstuffed into a warm flour tortilla with Cajun-spiced aioli and a slaw of cabbage and fresh herbs. You get three to an order, though they are so massive you will likely stop at one — not that their wonderful flavor makes it easy to exercise such restraint.

MABEL SUEN
A recent special riffs on classic fish and chips with battered and fried whitefish and fingerling potatoes in place of fries.

Fish and chips could bring a tear to the eye of a British pub owner. Massive hunks of succulent whitefish are battered in a fluffy batter evocative of a funnel cake. In place of "chips," the fish is served on a bed of roasted fingerling potatoes dressed in shallots and capers, touches that would almost render the rich tartar sauce and hot sauce irrelevant if they weren't so wonderful in and of themselves.

Bait serves a Connecticut-style lobster roll, meaning its meat is poached in butter and stuffed into a pillow-soft bun evocative of Texas toast. Though the flavor was there, the shellfish was on the tough side. The restaurant's Caribbean red snapper, however, was a show stopper. The whole fish, roughly fourteen inches long, is breaded and fried, its succulent meat fresh and simply seasoned. The dish comes with Caribbean-spiced rice and an array of sauces, but no matter how flavorful they are, the fundamental simplicity of the perfectly cooked fish is the highlight of the plate.

As impressive as the snapper is — and everything that came before it — nothing prepares you for the grandeur of Bait's seafood boil. Crab, shrimp and andouille sausage are served in a simmering cauldron of buttery, Cajun-spiced broth; it's a nectar so intoxicating I found myself lapping it up by the spoonful even after I'd fished out all of the seafood. The most wonderful part of the experience is plunging your spoon underneath the brothy surface and scraping the caramelized bits of seasoning, garlic and butter solids off the bottom of the bowl, then using this as a tapenade for the crab meat, potatoes or corn. It's breathtaking.

Bait's impressive desserts come courtesy of Tyler Davis. A rising star in the St. Louis pastry scene, Davis brings theatrics as much as substance to the restaurant's pastry program. The s'more is particularly impressive; the marshmallow fluff, graham cracker and molten chocolate are served with a glass covering that is removed as soon as it hits the table. Inside the glass, wood smoke swirls around, infusing the components with smoky flavor and giving diners the feeling that they are sitting around a campfire.

All of this comes with a price point that matches its upscale ethos. Bait is not cheap, far from it. Entrees range from $20 to $60 — a price that is commensurate with the expense of flying in fresh seafood, but one that is not exactly suitable for a casual Wednesday night dinner. Hodgest is taking a risk with those prices, but as a businessman, he knows he has the product to back it up. After all, an experience as wonderful as Bait is utterly priceless.