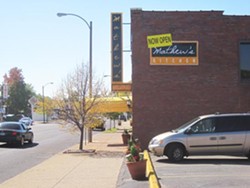 Owner Mathew Unger says the incident was blown "a little bit out of proportion." As reported, the fire did occur in a dryer. Unger says the dryer is located in the basement of the building. Smoke was the main issue once the fire had been contained.

"It could have been a lot worse," says Unger, noting that the fire happened when the restaurant was closed and unoccupied.

Mathew's Kitchen opened for dinner as usual that night. For more on the new restaurant, see our interview with Unger.