Of course this isn't Chinese food. It's Chinese-American food, and the epitome of it. Chinese immigrant and restaurateur David Leong had trouble convincing '60s Springfieldians to eat his Chinese dishes. He looked at the local food preferences, which lean strongly on southern traditions, and created a dish that balanced the two food cultures: deep-fried, breaded chicken chunks topped with a brown oyster sauce-based gravy, sprinkled with cashews.

Two years ago, the New York Times deemed Leong and his creation worthy of a profile.

Although the profile says that Springfield-style cashew chicken is a regular on St. Louis-area Chinese menus, we beg to differ. More often than not, local restaurants opt for the stir-fried version. Cross the river, and forget about it. Metro East Chinese restaurant employees inevitably don't know what we're talking about when we describe the dish that first eased our young Midwestern palate into the world of Asian cuisine.

But sometimes we want something more upscale, like the fresh offerings of Bobo Noodle House (278 North Skinker Boulevard, University City; 314-863-7373), which has cashew chicken.

Is it a fair fight to place a dated, Americanized chop suey house favorite against a new-fangled, Americanized version that probably has nothing in common with the original aside from chicken and cashews? We think so. 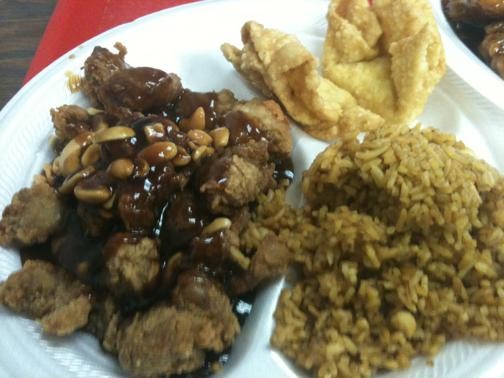 Quik Wok's dish is a fine example of Leong's original, even though it's listed on the menu as "Crispy Cashew Chicken." But it's Springfield-style, alright. Rich chunks of chicken thigh are breaded in flour, not battered in cornstarch like most fried meats in Chinese restaurants. The chicken's a little crispy, a little chewy, with a strong chicken flavor thanks to the dark meat.

Good thing, because the chicken needs to stand up to the hearty sauce, which is thick and flavorful with the dark sweetness of oyster sauce, soy sauce saltiness and possibly a bucket of MSG. Exactly as it was meant to be. Cashews are thrown atop the sauce, unsalted and warm.

Quik Wok's crispy cashew chicken is a dead-on correct version of the original, which has survived nearly 50 years for a reason: It's a combination of textures and strong flavors that work well, and are worth an evening of sodium-induced water retention. 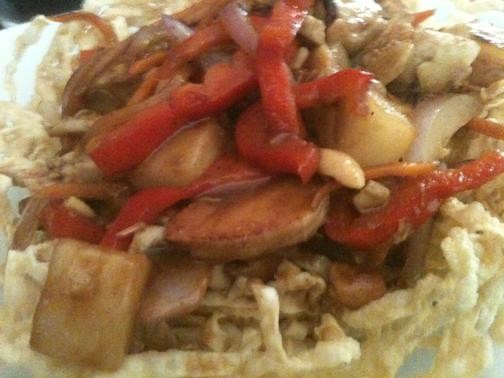 Bobo Noodle House's cashew chicken is far removed from the Springfield original, but it's closer than the diced and stir-fried version, thanks to some creativity that harkens back to the original. While the chicken is sliced into strips and stir-fried, a bowl constructed from egg noodles provides the required crispness.

The sauce is similar in color to Quik Wok's but lacks viscosity. Most of it sinks to the bottom, which is fine. Stirring the sauce and noodles together provides that crispy-chewy texture. The sauce's flavor is more sweet-and-sour than oyster sauce. It's good, but a more savory sauce would have been welcome.

Because the dish uses white meat, the chicken flavor is much milder, with the predominant flavor in the dish coming from the strips of red bell pepper and chunks of pineapple. Again, more sweet than the original. Cashews are stirred into the dish and tend to get lost in the mix.

Overall, there's absolutely nothing wrong with Bobo Noodle House's cashew chicken. In fact, it's delicious. But it would have been exciting to have experienced a modern take that more closely resembled the original.

The Winner: Both dishes are excellent, and we'd gladly partake in either. However, for the classic cashew chicken experience, the win goes to Quik Wok. For quality and innovation, props to Bobo for continuing the evolution of Asian-American food.