Battle of the Pumpkin Cupcakes: Squashing the Competition

image via
Cute enough to eat, but not legal to eat.
Now that your Halloween hangover is but a distant memory, we're going to have to break it to you: Our long, gourd-related national nightmare is not over yet. Thanksgiving looms in the near future, and pumpkin-related desserts will be crowding our bakeries for at least another month.
With this in mind, Fight Club Sandwich decided it was time to step in. Another enduring trend, though less seasonal: the cupcake. Why not marry the two culinary trends, and then make them fight? Enter the pumpkin cupcakes. In the red corner, we have the Pumpkin Harvest from the Cup in the Central West End. In the blue corner, the Pumpkin Pie from Delmar Boulevard mainstay Jilly's Cupcake Bar.
click to enlarge

Kase Wickman
The rich inner life of the Pumpkin Pie.
​We dished out $5.50 for the cupcake, which was roughly the size of two fists stacked atop each other. Seriously, it's a monster; half the thing is frosting.
It's a delicious monster, though, and true to its namesake, it tastes exactly like pumpkin pie. It's the same weird orange color as the middle of the store-bought ones too. The pumpkin cream cheese filling tastes exactly like the cake, which tastes exactly like the pumpkin buttercream, just with very slight changes in texture (the cake was crumbly and moist, so not too different from the other cream components). The vanilla buttercream tastes more like the whipped cream dollop tossed on top of a slice of pie, in a good way.
The old adage is wrong, though: You can have too much of a good thing. Jilly's cupcake was delicious, but ol' Gut Check had to check our guts and stop halfway through to go brush our teeth. It isn't bad, it's just roughly the size of a small child.
Bring your Thanksgiving guest list of extended family and crabby old aunts to Jilly's, and maybe together you can finish off this cupcake, one bite at a time. 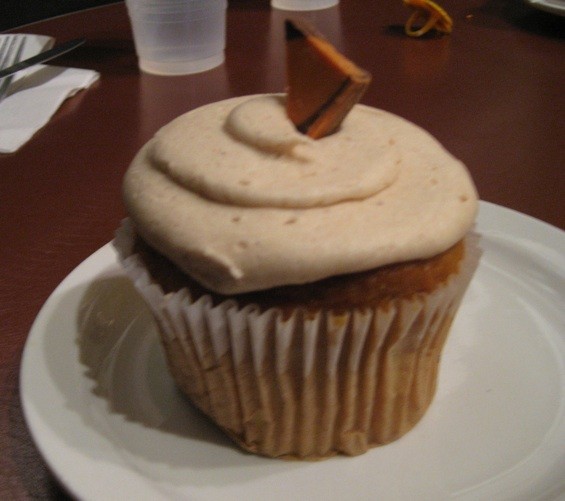 Kase Wickman
​The Cup (28 Maryland Plaza Rear, 314-367-6111) in the Central West End, which until recently was known as The Cupcakery, is home to a rotating cast of cupcake characters, including several whimsical combinations, as well as traditional mainstays like red velvet. The crown jewel of their autumnal offerings, however, is the Pumpkin Harvest.
Available at the shop until the end of the year, the Pumpkin Harvest is a pumpkin spice cake topped with cinnamon buttercream and a wedge of pumpkin-swirled chocolate. It'll set you back $2.75 and is bigger than a regular cupcake, but not quite crossing over into the jumbo category. (The cake is actually the same size as that at Jilly's, but the buttercream crown is somewhat less intimidating.)
The Pumpkin Harvest doesn't have any cream fillings or double-stacked frostings, but it packs a lot of flavor. The cake itself is moist and spicy -- definitely pumpkin, but not overwhelmingly so. The cinnamon frosting is a dream, not too sweet or too spicy, and perfectly complementing the cake to make it taste almost breakfasty (not that Gut Check would ever eat a cupcake for breakfast, no way. Ahem). It tastes like something your grandma might make, but 80 times better. Best of all, the flavors are toned down enough so that it doesn't feel like pure novelty, like the tooth-rotting sweet of a Starbucks pumpkin spice latte. Instead it tastes like a treat that incorporates many of the flavors we associate with autumn.
The Winner!
In this Fight Club Sandwich installment, the Cup reigns. The two cakes were of similar size and moistness, but the price (literally half that of the Jilly's cake) and the flavor of the gourd-geous (see what we did there?) Pumpkin Harvest at the Cup won us over.