BEAST Butcher & Block Opens in the Grove This Saturday 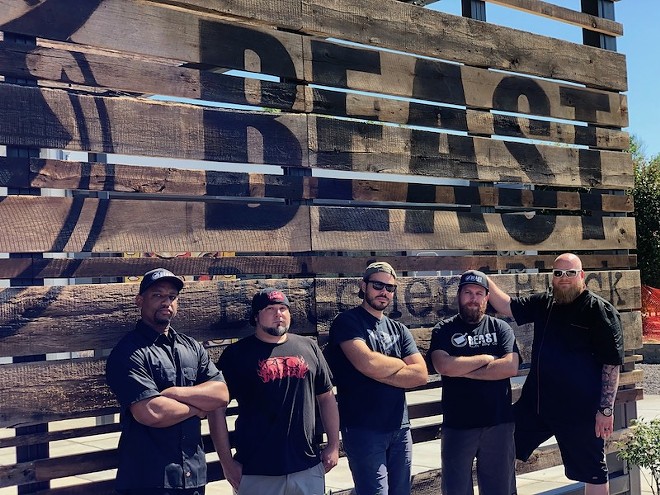 Now the summer can begin: BEAST Butcher & Block (4156 Manchester Avenue) will open for business in the Grove beginning this Saturday, June 15.

David Sandusky's highly anticipated barbecue joint will be a beast in every sense of the word: a 6,000-square-foot space with seating for 95, plus a patio that holds 25. It's got its own parking lot (something, Sandusky points out, most eateries in the neighborhood cannot boast). And it includes no fewer than six smokers, what Sandusky says will be "the largest smoking capacity at one location in the area."

And if that name sounds familiar, well, it should be. This BEAST is an offshoot of Belleville's four-year-old BEAST Craft BBQ, which despite being located in Illinois, a good 30-minute drive from the central city, has been praised as the best barbecue in St. Louis. Now Sandusky's top-tier smoked meats and sides are about to get a whole lot more convenient for city residents.

“The BEAST Butcher & Block concept is two years in the making, and for good reason. There are a lot of moving parts, but we’ve been able to build things the way we want them to be, rather than be held back by the building’s limitations – or anyone’s expectations. We’re not compromising. It’s all on our terms,” said Sandusky in a news release. “The extra time we’ve taken has allowed us to create something unique to barbecue in the Grove, and it gave us the perfect opportunity to hire an all-star culinary team. I have complete confidence and respect for them. We look forward to finally sharing BEAST with the people of St. Louis.”

That all-star team includes Ryan McDonald (formerly of Good Fortune) as executive chef, former Paddy O’s “BBQ Madman” CJ Baerman as butcher, and Kelvin Johnson as sous chef. BEAST Craft BBQ's pit boss, Jim Thomas, will take on that role in the Grove, while Sandusky will be pitmaster for both restaurants. Helen Beshel now serves as director of operations, freeing up Sandusky for time in the pit.