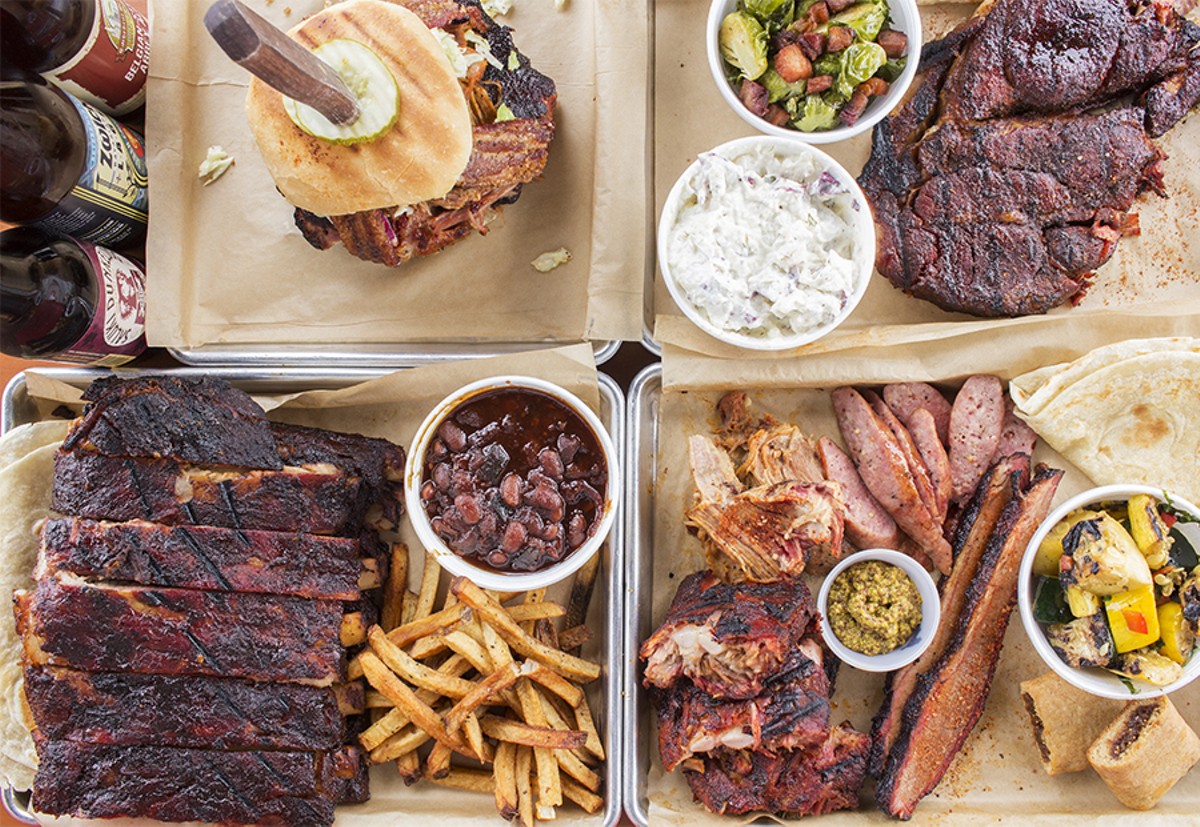 "I saw you looking around for a knife," our server mocked as she breezed by our table.

Her gentle ribbing was the only thing that broke the spell. Ever since pitmaster David Sandusky had personally delivered our pork steak and my husband and I took that first, mind-blowing bite, we'd been sitting in complete and utter silence, so enraptured by a piece of meat you would have thought we'd taken monastic vows.

I think we were in shock. After growing up in St. Louis we'd both had our fair share of pork steaks. Those thin, fatty Maull's-covered beauties — maybe sprinkled with a little Busch beer for good measure — are a staple of backyard barbecues. If St. Louis summers have a taste, it's pork steaks and baseball victories. 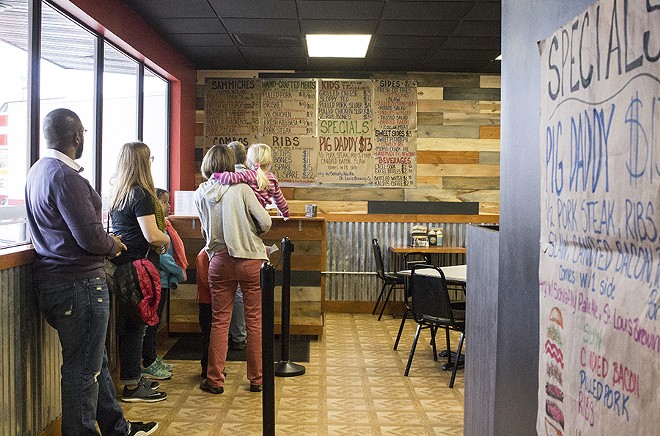 Yet there we were, all the way across the river on the far side of Belleville, digging into Beast Craft BBQ Co.'s char-coated pork shoulder as if it was our first. And really, it was the first time we'd experienced one like this.

Beast's version is three times the thickness of a traditional pork steak, giving it the feel of a double-cut Delmonico rib eye. Gone, too, is the tangy tomato sauce. The only condiment on this behemoth is the glaze of fat, spice rub and char. It falls apart with barely a prod, almost like a composite of pulled pork rather than a singular cut.

Beast Craft BBQ Co. opened last December in the former Hy-Ho restaurant in Belleville, Illinois. Normally, I would have visited it sooner, but the metro area's oversaturated barbecue scene left me feeling blasé about a lengthy trek across the bridge. Then came the whispers about Beast being a contender for the best barbecue in the bistate region, as respected local chefs Instagrammed their meals from its dining room. When it placed on Eater's "St. Louis Heatmap," I realized I could no longer ignore avoid the drive.

And it is indeed a drive. From midtown, it takes roughly 40 minutes to get to Beast Craft BBQ Co. I'd curse Sandusky's choice of location, except that he lives in Belleville and intended to open a simple, neighborhood barbecue joint. It's not his fault this place has become a destination. 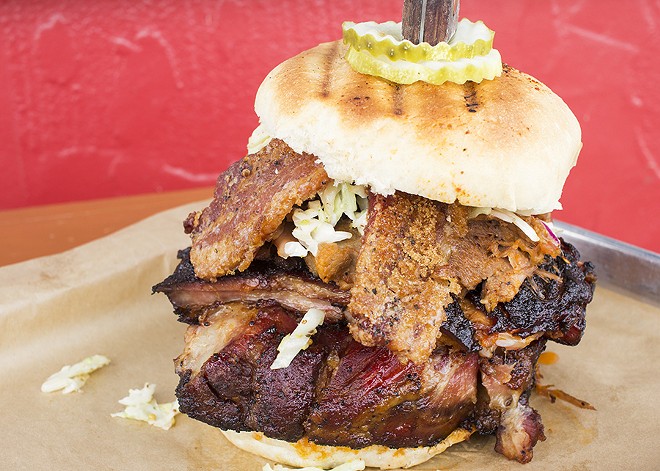 An eighteen-year veteran of the restaurant industry (his résumé includes Bully's and Doc's smokehouses), Sandusky and his wife Meggan converted what had been a Belleville institution into a casual smokehouse — multicolored reclaimed wooden walls, corrugated chair rails and red-paint accents. The hand-written menu, which hangs over the counter where you order, looks like it was scrawled on the back of a brown paper grocery bag.

But while my hunger-induced road rage dissipated as soon as I bit into that pork chop, it was only the tip of the snoot. Though barbecue purists may argue over the need for chew and pull on a rib, Beast Craft BBQ Co. shows the virtues of a fall-off-the-bone style. The pork spare ribs are rubbed with a warm, almost sweet, spice blend that marries fruit wood smoke to infuse the meat. A thick layer of char coats the pork, providing a bittersweet crunchy coating for the succulent meat underneath.

I wouldn't have dreamed of defiling such beautiful meat with a condiment, but the squeeze bottle labeled "cherry chipotle" made me reconsider. I squirted a dash on one of the ribs' corners for a taste but found myself unable to resist dousing the meat. The rich, baked fruit flavors in the sauce glazed over the smoky pork, evoking the heavenly scent of my grandpa's pipe. I can't imagine a more perfect sauce for these ribs.

Pulled pork came out in a fist-sized hunk with one side offering a layer of char. The tender meat was so spectacular it made me embrace the primal urge to eat it with my hands (so did my toddler, who shoved handfuls in her mouth and kept demanding more). Beef brisket also hit the mark. The thinly sliced meat had a small layer of smoke-kissed seasoned salt, reminiscent of prime rib. I tucked it into one of the accompanying tortillas and added a dash of the traditional sweet and smoky sauce for a Texas-style taco.

In addition to the smokehouse mainstays, Beast Craft BBQ Co. serves excellent kielbasa. The plump sausages have a snappy casing and mild sweet taste that intensifies in the smoker. Our server suggested pairing them with the house mustard, a pungent accoutrement made from whole seeds that gave a perfumed pop. 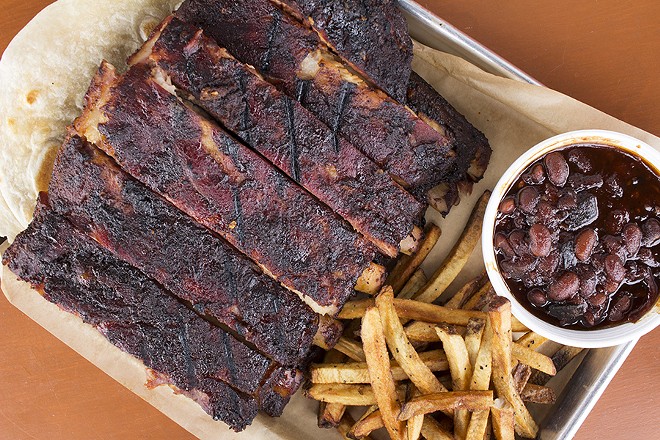 With meat this good, they could have given me a bag of stale potato chips on the side and I wouldn't have cared. Instead, Sandusky approaches his side dishes with the same care he shows the main courses. Pit beans, simmered in a molasses-thick, cola-like sauce, are fortified with large enough hunks of pork to be considered a main course. Potato salad — so often a throwaway accompaniment — is made from large cubes of potatoes that go beyond being cubed without quite being smashed. A creamy, dill-heavy dressing clings to the spuds. The sweet-potato pie, served as an individual tartlet, is topped with crumbled pecans and encircled in flaky crust. And Brussels sprouts eschew their health-food status with cubes of salted pork belly. I didn't mind one bit.

World-class barbecue is only part of the Beast Craft BBQ Co. story. Sandusky has curated a decent craft-beer list that includes mostly local favorites with a few out-of-state labels, and he lists a suggested pairing with each entrée on the menu.

But really, this place is all about the meat — "All Killer No Filler," as its motto boasts. And Beast Craft BBQ most certainly is a killer. Indeed, it's killed my desire ever to eat a pork steak other than the one that comes out of Sandusky's smoker — no fork required.