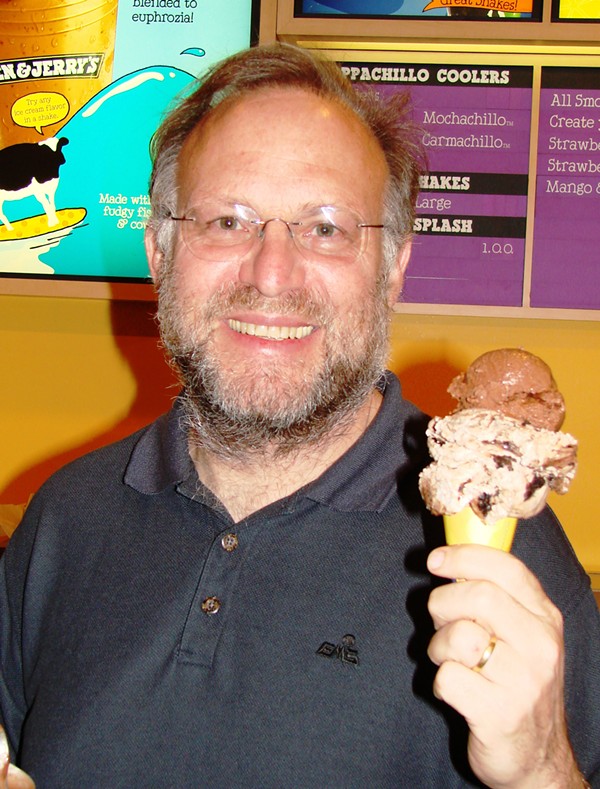 Courtesy of Michael D'Andrea
Jerry Greenfield, one half of Ben & Jerry's Ice Cream, chows down.

Ben Cohen and Jerry Greenfield met in seventh grade. After that, their lives diverged. Greenfield didn’t make it into medical school; Cohen dropped out of several colleges. And then … they started making ice cream.

“After realizing we were failing at everything we were trying to do, we decided to do something together,” Greenfield explains. Why ice cream? “We had always liked to eat.”

At the time, Greenfield says, they didn’t plan to launch a career.  Ben & Jerry’s Ice Cream started in an abandoned gas station with just $12,000; the co-founders talked about becoming cross-country truckers once the ice cream business ran dry. But it never did.

Now they own an international chain that’s so big, they get asked to speak about “entrepreneurial spirit, social responsibility, and radical business philosophy” — as at the University of Missouri-St. Louis campus tonight. They’ll be there at the Millennium Student Center at 7:30 p.m. The event is open to the public.

One of the company’s assets has been the uniqueness of their ice cream. For that, Greenfield credits Cohen, calling him the creative (also, “unconventional” and “anti-authoritarian”) one. Because Cohen is “not constrained by conventional thinking or so-called rules,” Greenfield says, their ice cream is different from everything else on the market.

“I have never created a flavor in the entire history of Ben & Jerry’s,” Greenfield says. But while Cohen masterminded the flavors, Greenfield turned them into reality, following his partner’s recipes.

To date, one of the partners’ biggest disagreements has been over the size of the chunks within their ice cream. “Ben wanted all these big pieces of cookies and candies and crunchy things,” Greenfield explains. “I just thought that was too much, that it was over the top,” and that people would want more consistent distribution of smaller chunks.

But Cohen was right. People love the larger chunks. They’ve become a hallmark of Ben & Jerry’s. “It turns out that being a little crazy is generally OK,” says Greenfield.

The company’s social mission, Greenfield adds, has been “equally important” to its financial mission. “As Ben & Jerry’s started to grow from this little ice cream parlor, we became aware of the influence that business has in this society,” he says. “Business is essentially a neighbor in the community. As a neighbor, it has a responsibility to look out for the other neighbors just as any individual would.”

Though this social agenda has taken many forms over the decades, in recent years Ben & Jerry’s has demanded GMO labelling, bought only fair trade-sourced ingredients, and supported campaigns for raising the minimum wage, marriage equality, and voting rights.

And even though company policy prevents Ben & Jerry’s the brand from endorsing candidates, both Cohen and Greenfield as individuals support Bernie Sanders. Cohen even used his own kitchen to whip up a small batch ice cream called “Bernie’s Yearning,”  The flavor features a solid disk of chocolate on top, which Greenfield says “represents all the wealth that has gone to the 1 percent since the last recession.” To eat the ice cream, you have whack it with a spoon, distributing chocolate (and wealth) into the mint ice cream beneath.

At heart, for all the founders’ issue advocacy, Ben & Jerry’s is still about the ice cream. Greenfield’s favorite flavor that’s currently on the market is Americone Dream, an ice cream stuffed with vanilla, caramel, and fudge-covered waffle cone.

His all-time favorite, though, is “Coconut Almond Fudge Chip.” It didn’t sell well (“coconut is a somewhat polarizing flavor,” Greenfield posits). Now it’s in the “flavor graveyard,” which has two forms — one virtual, on the company’s website, and another at its factory in Vermont.

But while Greenfield could visit “our dearly departed flavors,” he hasn’t in a long time. He says, “It’s too emotional for me to visit the flavor graveyard.”

And that’s the thing about ice cream, Greenfield explains. It evokes memories. It comforts. “It’s not just another food,” he says. Having a bad day? “We just head to the freezer.”