Billie-Jean, Thrilling in Every Detail, Is Zoe Robinson's Best Restaurant Yet 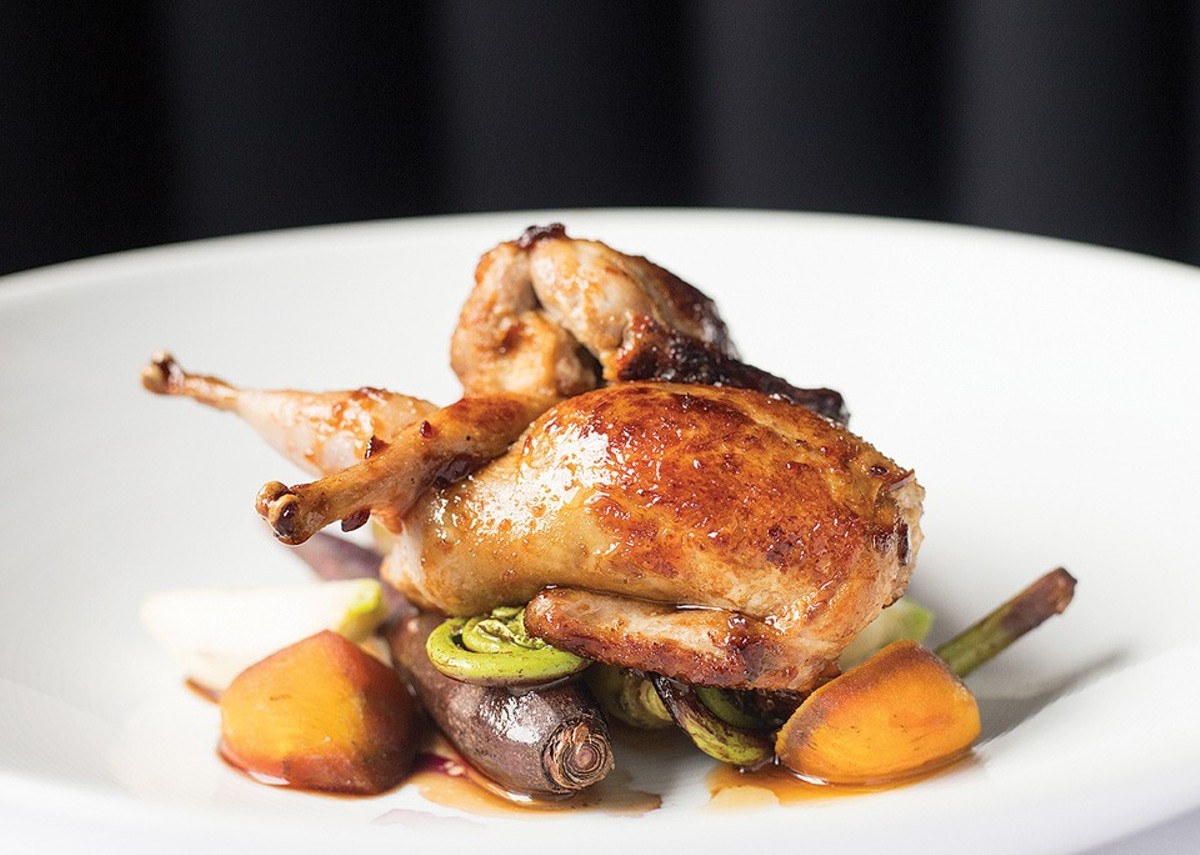 A show-stopping roasted quail is stuffed with golden raisins, pine nuts and cornbread, then served with baby-root vegetables. MABEL SUEN

All you need to know about Billie-Jean can be found in this one detail: Zoe Robinson puts ribbons around the toilet paper. Underneath the sink, almost completely hidden from eyesight, the extra rolls that would be merely utilitarian at any other establishment are imbued with dignity in Billie-Jean's powder room, wrapped in a shiny black satin ribbon and stacked neatly next to the wastebasket as if they are part of the décor.

You might not even notice they're there, which is what makes their elevation to a thing of beauty all the more significant. It gives you a peek into Robinson's world, one that has been filling the St. Louis dining scene with class for the past thirty years. From Café Zoe to Zoe Pan Asian, from Bobo Noodle Company to I Fratellini to Bar Les Freres, Robinson has made her mark opening restaurants that are not only delicious but also impossibly stylish, with fastidious attention to every last detail. For anyone else, it might seem crass to write about their restaurants through the lens of the restroom. For Robinson, crass isn't even in the vocabulary.

However, Billie-Jean's style is not a substitute for substance. In fact, it embodies it. That little detail is just one of a million that conspire to make Billie-Jean a flawless restaurant — and one that feels more "Zoe Robinson" than anything she's ever done.

Robinson herself will say as much. After entering the industry at eighteen, owning her first restaurant by 23, her career has been a zig-zagging line leading to this moment. As she has matured, so has her confidence and point of view. It's no shock that her most personal restaurant — one she describes as the culmination of everything she has ever done — is also her best. 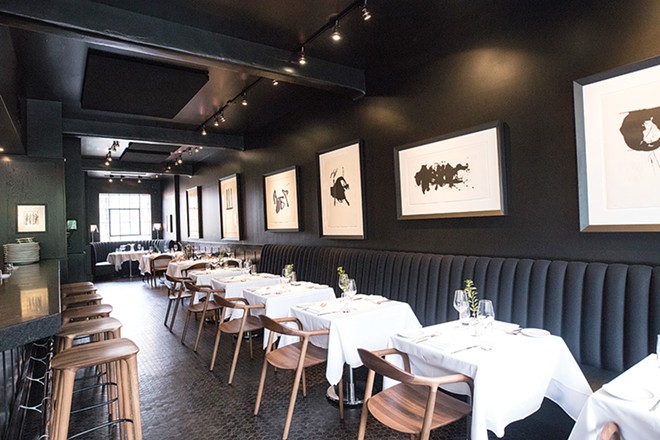 MABEL SUEN
The restaurant is sexy in black and white.

Because it is so biographical, Billie-Jean should be named after Robinson, but alas, she's already had two restaurants that bear her first name. This time, she went with Billie-Jean as a nod to her mother and father and not, as everyone jokes (usually in song form), a certain 1980s hit by a certain King of Pop. Robinson is in on the joke, however, and even had the staff's stylish all-black uniforms emblazoned with phrases including "lover" and "not my lover." At a restaurant that looks so sleek and serious, it's a dose of humor that lets you know Robinson is having a grand time.

And what a grand time it is. Billie-Jean feels kind of like a mid-century Manhattan supper club, complete with matchboxes and dice on the bar and servers who encourage you to sip vermouth. A black-and-white photograph of her parents is presented on a postcard with every check, a touch that adds to the old-fashioned ethos.

But that is where the vintage details end. Billie-Jean is thrillingly modern. Outfitted almost entirely in black, it includes walls, ceiling and banquettes darker than Mick Jagger's door, lightened only by white tablecloths, black-and-white photographs, green fern fronds and wooden barstools and chairs. Even the entrance to the shotgun space is dark, making it easy to miss if you are a casual passer-by, though the recently added patio tables make it stand out more.

MABEL SUEN
Executive chef Ny Vongsalay allows his roots to shine through on the Asian-inflected menu.

That modern feel goes hand in hand with the menu of contemporary American cuisine, buttressed with southeast Asian influences courtesy of Laos-born chef Ny Vongsaly, Robinson's longtime collaborator. He and Robinson did not know what kind of restaurant they were creating when they sat down to write Billie-Jean's menu, but when they finally did so, it flowed naturally. Part retrospective, part fresh and new, they developed an assemblage of dishes that fuse their personalities seamlessly.

Prosciutto-thin slices of yellowfin tuna crudo the color of cherry blossoms are simply dressed with fresh herbs, lime juice and Fresno chiles. You'll want nothing more than this bright, slightly spicy accent to the melt-in-the-mouth fish, but you also want nothing less: The citrus and heat are a delicate counter to the rich tuna. It tastes like springtime.

Sesame-lacquered Japanese eggplant and crispy tofu hint at the "hot braised" sauces associated with certain genres of Chinese food without being sticky sweet. The fiery caramelly glaze coats the perfectly cooked eggplant and tofu and leaves a trail of spice on the palate. It's so warmly satisfying you'll wish it was an entire entree. 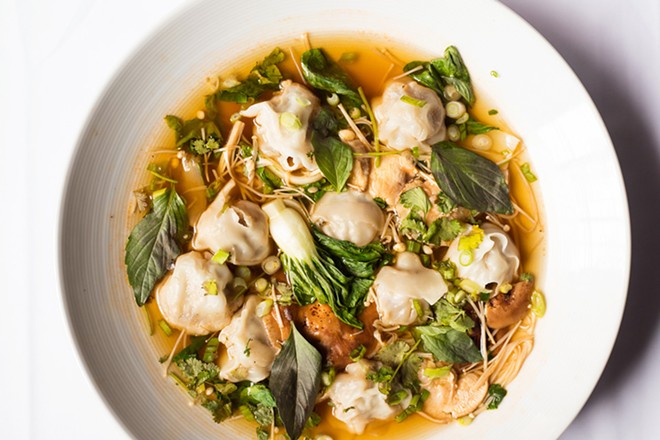 MABEL SUEN
Lemongrass and lime-leaf pork are featured in a shrimp dumpling soup.

If the eggplant makes the case for the kitchen's expertise, the lobster delivers the verdict. Though the shellfish is grilled, its succulent flesh will make you think it was poached instead. A drizzle of Thai basil butter and fresh cilantro tastes as if drawn butter was sent on vacation to Phuket. It's paired with a scallion corn cake that plays up the lobster's natural sweetness. This is not just the best lobster in town; it may be the best preparation I've ever tasted.

God bless our server, Elena, who suggested we pair a dish of baked quail eggs with the morels that the restaurant had just gotten in for the season. The result was pure luxury: Creamy, soft-baked eggs lined the bottom of a copper serving dish. In addition to the morels, plump blistered tomatoes just waiting to pop and a savory eggplant-and-caper relish rested on top. As Elena suggested, we spooned the eggs over the slices of griddled brioche that were served on the side, placed the eggplant relish on top of that, pierced the tomato to let the juice soak in and garnished it with the morels. By the time we had devoured every last morsel, other guests around us were begging to follow our lead.

Just when you think you've maxed out on enjoyment with the small plates, the grilled swordfish arrives, an expertly cooked filet of meaty fish paired with olives, lemon and parsley. A touch of fennel infuses with the lemon, perfuming the swordfish with what tastes like licorice and flowers. Together with the subtle salt of the olives, it's ethereal.

You might wonder if you were somehow transported up the street to Bar Les Freres when the strip steak arrives, a behemoth cut of beef encrusted with salt and pepper. Melted shallot butter drips over the meat and mingles with its jus, soaking into the accompanying crispy frites like a Parisian poutine.

Still, it's the quail that's the show-stopper, a golden raisin, pine nut and cornbread-stuffed game bird that fills the table with the nutty scent of brown butter when it's placed before you. The skin is perfectly crisped and the meat so tender it slides off the bones. It's a nod back to the quail Robinson and chef Vongsaly served at their first restaurant some 30 years ago — a mouthwatering tribute that proves some things have staying power.

Billie-Jean carries its perfection through dessert, with silken Vietnamese coffee crème brulee and an apricot bread pudding as creamy as custard. Its texture is mind-boggling, somewhere between cream and fluff, almost like a quiche. Slivers of almonds and coconut add crunch to this luxurious sendoff.

But as good as its food and as lovely as its atmosphere, what made the night at Billie-Jean was the hospitality, in particular on one visit from our delightful server Elena. She is responsible for that outstanding morel and quail-egg pairing, but her skill goes beyond her palate. With a gentle confidence, she confiscated our menus and encouraged us to let her take the lead, filling our evening with one surprise after another and attending to our every whim with a genuine touch. That she could do so shows she not only has a commanding knowledge of the restaurant but that she knows how to read her guests perfectly, giving them what they want even before they know what it is. It was quite possibly the best service I have ever experienced.

Elena was the one who flagged that detail about the restroom. "Just go in there and look," she told my table. "You'll see something in there that is totally Zoe." When I came back, she asked if I'd found it, and I nodded. In fact, I'd found it in just about everything I saw throughout that dazzling dinner. And clearly, Robinson has found it too. 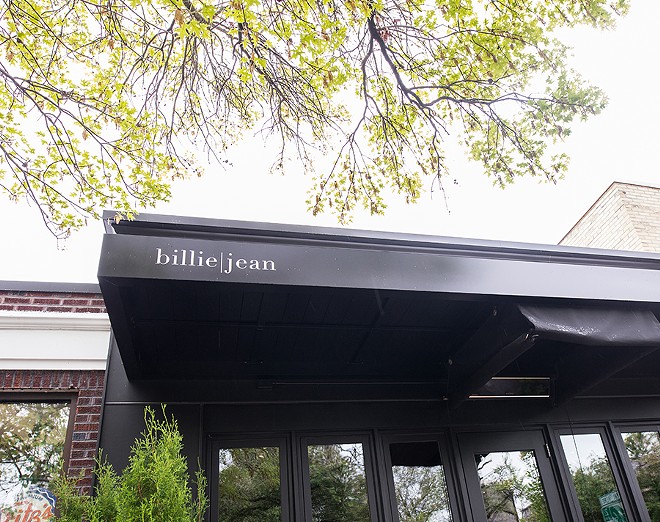