Blind Tiger's "Whiskey Business" Cocktail Sneaks Up on You

We're in full-on spring mode here at Gut Check world headquarters, but that doesn't mean we're giving up whiskey. The spirit is known to warm a fella up, but the Blind Tiger's (7376 Manchester Road; 314-646-8822) whiskey cocktails are perfect for spring, too.

When we reviewed Blind Tiger in February, the whiskey, pizza and ribs joint didn't have a cocktail menu nailed down. After a few months of experimenting, it has debuted a whiskey cocktail menu for spring (but we bet if you ask, the bartender will come up with something just for you). Bartender Sam Fick suggests the "Whiskey Business" for these not-quite-warm days.

"It's not overly in-your-face whiskey, but it's kind of got a sweet side to it," he says, "and it sneaks up on you -- like spring." It also sneaks up on you because you don't realize how much bourbon you're drinking. The "Whiskey Business" is the rare whiskey drink that you could comfortably sip outside, though. The ginger ale keeps it light. 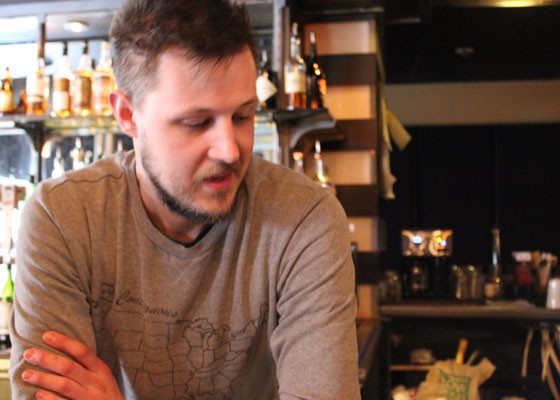 The other drinks on Blind Tiger's new cocktail menu include the house Manhattan, the "Pow Wow Perfect," made with Pow Wow botanical rye, Dolin sweet and dry vermouth and angostura bitters. Fick says it's the Manhattan the bartenders have been making since Blind Tiger opened, though other drinks took a bit of time. The "Chancellor" has one foot in winter, with Speyside scotch, Presidential Tawny (a port), Dolin dry vermouth and orange bitters. Fisk briefly singes the orange garnish with a flame before dropping it in the drink.

"It releases the flavors and allows it to really bloom in the glass," he says. "Plus it looks cool." The "Blood and Sand (Breakfast Club Edition)" is Compass Box spice tree scotch, Luxardo maraschino liqueur, Dolin sweet vermouth and orange juice; the "Cidre House Rules" is Stella cidre, Tap 357 maple rye and apple bitters. The one cocktail you'll only be able to get for about a month or so longer is the "Tiger (Hot) Toddy," made with Brer Rabbit molasses, Bulleit rye and apple bitters.

Fisk says the cocktail menu will probably change seasonally, though the "Pow Wow Perfect" will most likely be a permanent fixture, and some drinks will last longer than others before they head into a full summer menu.

Continue for the "Whiskey Business" recipe.