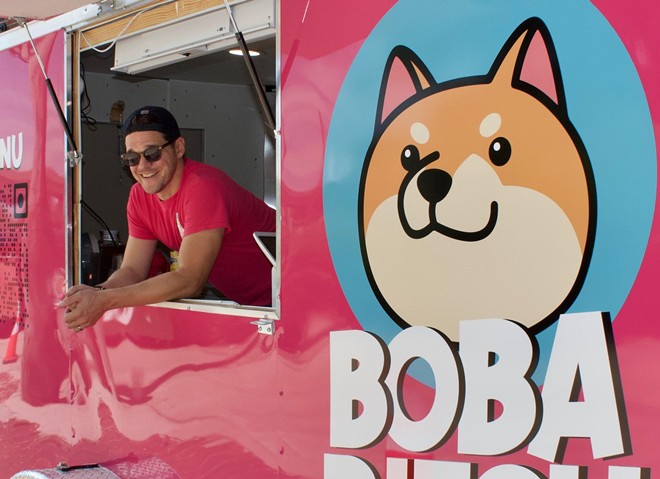 Courtesy of Boba B!tch
Franklin Killian is excited to bring a fun and delicious boba tea experience to St. Louis.

For a decade, Jefferson County–native Franklin Killian lived in Los Angeles, where he wrote film scripts, acted in television shows and gave very little thought to boba tea other than wondering why kids seemed to be lining up around the block to get a taste of the tapioca-laden beverage. However, as he watched it turn from niche drink to bona fide trend, he got curious, then hooked and started to seek it out both around LA and any time he'd come back to the St. Louis area to visit family.

When Killian moved back to St. Louis in 2020, he was struck by how few boba shops there were and couldn't help but feel he was meant to do something about it. What that looked like, he wasn't quite sure, so he told his wife he was going to marinate on his ideas for a year, then take some steps if he was still enthusiastic about it.

Now, nearly two years later, Killian is bopping around town in his mobile boba tea trailer, Boba B!tch. Though he admits the name is intentionally cheeky and designed to grab attention, at its heart, the brand is about pure, high-quality recipes he hopes people will come back for time and again.

"I'm approaching this the way I do when writing scripts: Instead of having a hundred drinks or chasing trends, I'm going to work my ass off on 10 different recipes," Killian says. "I'm going to give it to someone, and they aren't going to want to customize it; they're going to come back for that staple drink. Of course, I want it to look sexy, but it has to be delicious more than anything."

As passionate as Killian is about making Boba B!tch a vibrant, recognizable brand, he is even more committed to serving high-quality boba tea. He makes all of his syrups from scratch and uses fresh organic fruits, organic whole milk, organic brown sugar syrup and caramel, and homemade cream cheese salted caramel mousse for the drinks.

"It doesn't taste like a damn cereal box," Killian says with a laugh.

As serious as he is about the recipes, Killian is equally dedicated to making sure his guests have a good time. Drawing upon his experience in the entertainment industry, Killian brings a showmanship to Boba B!tch, shaking his drinks in front of guests and engaging with his customers to create an energy around the brand. So far, it's worked. Killian has sold out at several festivals around town he's done this summer, though he prefers the small-scale interaction to the crowds at larger events.

"If I can engage and chat with people and find out what is going on in their lives, that's so much better than just a factory-style line where I am trying to cut down the line quickly, " Killian says. "That may be more money, but the engagement just isn't there."

Though he's had a few successful outings under his belt, he is not yet ready to take things to a different level. He's been approached about opening a brick-and-mortar location, but for now, that's not part of his plan, as he does not want to move things too quickly. He's just focused on getting people obsessed with his boba tea and building buzz that, for him, is worth much more than anything a storefront could offer.