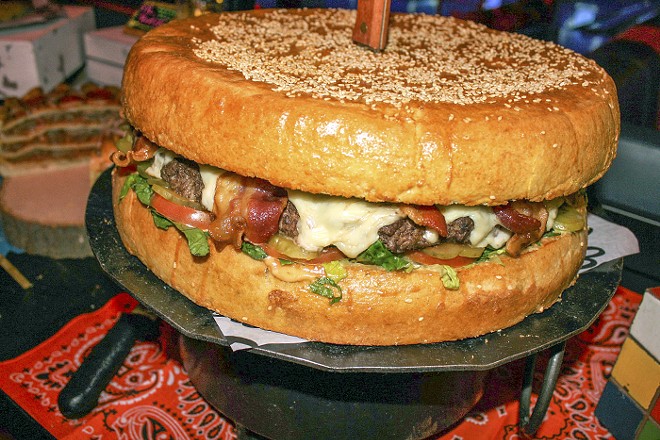 PHOTO BY JESSY KINZEL
Look at the size of that baby.
If you have never experienced the mind-bending combination of black-light bowling, half-gallon sized drinks and a hamburger copious enough to feed at least twenty people, you're in luck: The new mega bowling entertainment plex Bowlero (8070 Veteran's Memorial Parkway, St. Peters; 636-474-2695) is fully prepared to deliver you a heart attack on a plate and a night club to sleep it off in.

In 1938 in the village of New York City, Bowlmor started as a single-lane family bowling alley. Now it has grown into a multi-national corporation. Bowlmor bought out Brunswick and partnered with Paramount Studios, building more than 30 Bowlmor locations in the U.S. alone, with twenty more soon on the way.

PHOTO BY JESSY KINZEL
Fancy!
In its St. Peters' location, which has its grand opening this Saturday, the company spares no expense on the ornamentation and ambience. It’s not just a bowling alley, with wall-to-wall arcade games, three bars, and dining rooms capable of hosting up to 1,000 guests that make you feel more like you are in a nightclub. Area manager Beau Carter says, “We would like for this to be a family-friendly environment, but also a place where adults can relax and take in the atmosphere, that is (sorry, smokers) always 100 percent smoke free.”

And if monstrous foods are a hobby of yours, Bowlero has entertainment for you as well, starting with a pizza cake, which is roughly the size of a birthday cake and looks like a giant pizza lasagna, loaded with enough sausage cheese and pepperoni to last a lifetime.

PHOTO BY JESSY KINZEL
Say "cheese" for Bowlero's pizza cake.
There's also a two foot (yes, two foot) long mega dog — a fully laden Chicago-style dog, so big it needs to be served on a plank to stay on the table. The mega dog is smothered with peppers, onion and a few surprises even the best ball parks don’t offer.

Finally, the "Behemoth Burger" is truly the burger that eats seven other burgers for breakfast: five pounds of hamburger, lettuce, tomato, pickle onion, bacon and cheese on a sesame seed bun the size of your kitchen sink. This would challenge even the world's biggest appetites.

Everything is bigger at Bowlero, with nightly specials on half-gallon drinks, two hours of free bowling every Sunday and unlimited laser tag for $9.99 every Wednesday. Bowling, a half-gallon of ginger beer and a five-pound hamburger? We had no idea what we were missing, but we're about to make up for lost time.

PHOTO BY JESSY KINZEL
Definitely not your grandpa's bowling alley.
Scroll down for more photos of Bowlero.