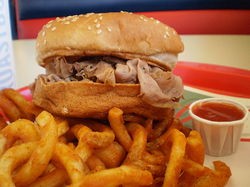 Gut Check can attest from our personal experience that meat slicers are bloodthirsty machines not to be trifled with. (Next time you see us in public, ask to see the scar from our close encounter with a representative of the species in an Ocean City, Maryland, deli circa 1997.) So we weren't at all surprised to learn that a meat slicer was responsible for this week's gross-out restaurant story at a Jackson, Michigan, Arby's, as reported by the Jackson Citizen-Patriot:

A 14-year-old boy who had visited the [Arby's] drive-through window with his mother was eating the sandwich and pulled a pad of a finger out of his mouth, Jackson police Deputy Chief John Holda said. He described it as the fingerprint portion.

(That "fingerprint portion" detail is just perfect, isn't it?)

The boy and his mother brought the finger into the Arby's, where the manager told them to be quiet, lest every other customer demand some.

Reached for comment, an Arby's spokesperson said that this wasn't the worst thing to happen to the roast beef-sandwich chain in the past few years, but a distant second to the "Good Mood Food" ad campaign.

No, seriously, an Arby's spokesperson said, "Usually, we're a lot more excited when a finger slips inside our beef curtains."

The boy who bit into the finger is reportedly fine. The employee who cut her finger went to the hospital; the hospital called the police; the emergency dispatcher contacted the health department, which in turn investigated and made sure the Arby's in question dumped its food.

Think you can do better than our terrible one-liners? Leave your Arby's joke in the comments. Whoever makes us laugh the hardest will win a restaurant gift certificate. (Not to Arby's.)