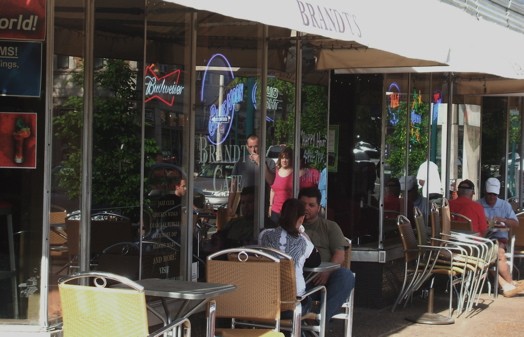 The Hours: 4-7 p.m. Monday through Friday

Cheap beer and discounted apps -- what's not to like?

The Scene: Despite its artsy décor and modish high-top tables, Brandt's is pretty laidback during happy hour. Instead of showing sports, the TV is tuned to stuff like Scrubs, and the servers are all willing to chitchat.

Happy hour doesn't attract a large crowd; most patrons appear to be on-a-whim walk-ins from the Loop. That'll get you a mixed bag, from students and other denizens to the gray-haired lady we saw sporting an Obama pin on her cardigan who keeps coming back to Brandt's "because it's neat."

Why You'll Go Back: You'll be tempted to try one of the gazillion beers that aren't part of the happy-hour deal. (They had us at Gulden Draak ale, a big-ass Belgian dark that packs a wallop.)

Also, on beautiful days the sidewalk seating is perfect for people-watching.

The Verdict: The location and vibe are pluses, but in the end Brandt's happy hour's kind of a tease. If you stick to the specials, you can snag a few drinks and an app for about $15. But if you succumb to the temptation of the regular menu and the upscale beers, you'll be digging considerably deeper.

Which is fine -- if you think of Brandt's as your go-to for quality, not quantity.