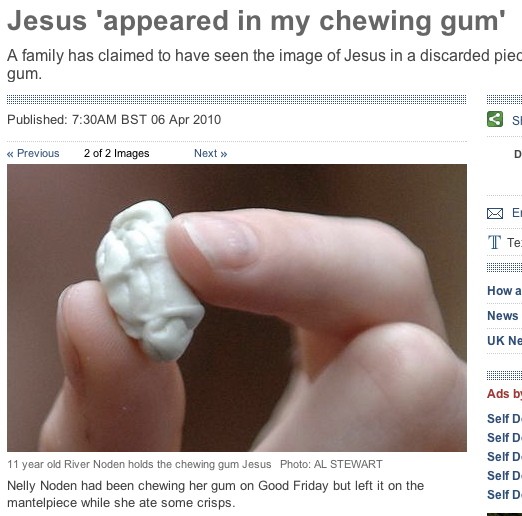 Though the Noden family reportedly intends to keep the Jesus gum as a memento, previous pareidolia incidents have led to big cash.

A holy pierogi sold for $1,775 in 2005, and a grilled cheese with the Virgin Mary's visage brought $28,000 the year before. Both were purchased on eBay by an online casino. Because the Blessed Mother of Cheese and the Son of Holy Potatoes wants people to play Texas Hold 'Em.

The High Ridge, Missouri, woman who found a Cheeto shaped like Jesus on the cross in 2008 opted to keep it, because it brought joy to her family.

Even weirder? The following year someone else found a Jesus Cheeto. (Should that be a Jeeto?) No, really. They did!

And they named it Cheesus too! No, really! They did!