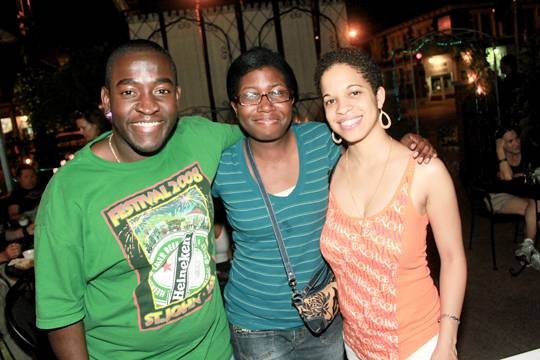 Cafe Natasha's Kabob International (3200 South Grand Boulevard; 314-771-3411) recently celebrated the one-year anniversary of its $10 all-you-can-eat hummus bar the only way it knew how: a falafel-eating contest.

"We decided to do the falafel-eating contest because it is the most popular part of our hummus bar," Bahrami says. Plus, hummus would just be too messy.

The eating contest was set for 7:30 p.m. First prize was dinner for two at the restaurant (which, hopefully, need not be redeemed that day), along with a plaque of recognition. Says Bahrami, "I think that [the plaque] is better than the actual dinner prize, because it gives you the bragging rights... that you are the falafel eating champion."

Maurice Muia told Gut Check he'd come to the restaurant to eat -- "and it just turned into a three-hour event" when he found himself signing on to participate in the contest. "I think I can win it," he predicted confidently. "I am in it to win." 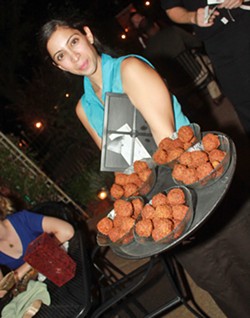 When the participants slowly made their way to the gluttonous stage, your humble Gut Check correspondent was among them. Considering we had spent the last three hours chowing down on the hummus bar, we were not physically or mentally prepared for more consumption of any kind. But what could we do? We dedicated our services in the name of journalism.

As we waited, we contestants discussed strategy. Fear Factor was a frequent point of reference, which should give some indication of the state of nervous trepidation. As for Gut Check, we had only one strategy, and that was not to blow chunks.

When the clock started, the crowd of friends and family got rowdy. We had three minutes to put on a show.

All four male contestants started slamming their balls into cups of water. Did we somehow miss the memo about how to properly digest a falafel ball? We came to a realization as we started chewing our first one and noticed that it started to expand in our throat. It literally had no give. We nearly choked. Is this what it's like to scarf down cow brains in a couple of seconds? Of course not, but it still managed to work up a little adrenaline.

We thought, after the first ball: "Some tahini sauce'll soften things up!" We were wrong.

When the ending time was called, we were still chewing our third ball. Not too impressive.

In those same three minutes, the first-prize winner had managed to consume at least a dozen falafel croquettes, and he took his picture with his plaque. But our hosts announced there would be a 30-second run-off for second place. Two gentleman had come too close to declare one better than the other.

Unfortunately, the second contest was also too close to call. Impressed by their dedication, Bahrami decided to award the runner-up prize to both of them. So our new friend from earlier, Maurice Muia, wasn't exactly "in it to win it," as he predicted -- but he did get one of the runner-up certificates.

Bahrami's convinced that falafel is a universal treat, even for the non-gluttonous. "It is almost like a hotdog in Middle Eastern cuisine," she says. "Once they are introduced to it, it becomes a favorite."

If you're not into falafel, she suggests that Cafe Natasha's sirloin beef shish kabob with its secret marinade might be worth a try.

"It has been 28 years now that we have been in business, and we have been using it all those years, and it is the one thing that no matter what cannot be found anywhere else," Bahrami says. "I have heard people say, 'I have dreamed about it,' I have had people say, 'You must put crack in this.'"

Sounds delightful. Just don't expect us to gobble it down in a race against the clock. We learned our lesson with the falafel.