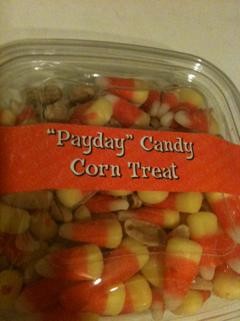 Robin Wheeler
The only good use for candy corn -- fake PayDays!

We don't like candy corn. But instead of taking time to discuss what a heaping mound of corn-syrup crap each candy corn is, we're going in the other direction to prove that even one of the most abhorrent candies can be redeemed.

Candy corn plus salted peanuts equals a PayDay candy bar. A PayDay bar! Somehow, a candy that tastes like sweet wax, when paired with salty peanuts, is caramel-y enough to seem like a good idea.

This PayDay party mix has been around for awhile. Top Secret Recipes posted it five years ago. We didn't discover it until last year when a friend brought a big jar of the PayDay stuff, around the same time Epicurious ran a recipe for PayDay brownies, decorated with the mixture.

This year, Dierbergs has cranked the faux PayDay frenzy to another level by selling it, premixed, for $3. We found it in the deli, an aisle away from where they sell the real PayDay bars.

But we couldn't help but wonder: While homemade PayDay mix might be a cute, possibly cheaper, way to get the great taste of PayDays, doesn't buying this faux version already made defeat the purpose?

And really? It doesn't taste that much like a PayDay. It's imperative to get the proper ratio of candy corn to peanuts in each bite. Because you do not want to get too much candy corn. It ruins the whole experience.

Come to think of it, scratch our previous thought. There is no redemption for candy corn. Because now it's not only nasty, but it's a liar.