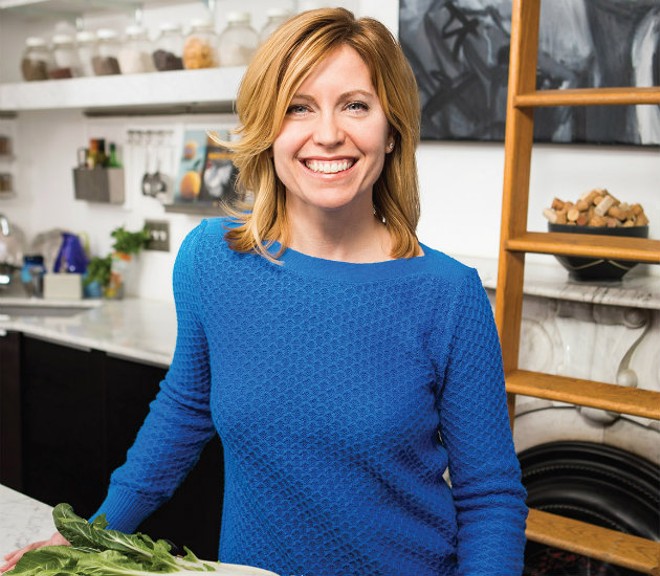 If Emmy-winning food journalist Cat Neville had to pinpoint the moment she fell in love with food, it would have been while she was in the fourth or fifth grade, living in Turkey. "My dad was in the Air Force, so we lived all over the world," Neville recalls. "I remember vividly when we first got to Turkey there was a base picnic, and the Turkish cooks were serving doner kebab. I'd never had anything like it, and it was so good that even after I spilled my 7UP all over my plate I ate it anyway."

Though she never expected to have a career that includes running a food magazine, producing an acclaimed regional television show and launching a national public television program, Neville admits it makes sense in the context of her upbringing. Traveling from country to country and having to start over every few years, Neville saw food as a lens through which she could understand culture. "I wasn't afraid of exploring," Neville says. "I was the kid would would order escargot in a restaurant when I was in the second grade. I was so proud of myself."

When she got to college, Neville pivoted to art history, though not because she was interested in memorizing paintings or artists. "I thought art was a fascinating way to explore culture — just like food was," Neville explains. "But I also enjoyed media and began to envision myself in media or magazines or something like that."

That vision coalesced around 2000 when Neville and Allyson Mace launched Sauce Magazine out of a south city apartment. At first, the plan was for the publication to be a restaurant guide, but it became apparent that they needed to keep people on the site with quality content. "Back then we used to say we needed a site to be 'sticky,'" Neville explains. "We didn't want people to just come for information; we wanted them to stick around, so we started including recipes and essays and reviews. It wasn't necessarily a grand vision, but it started taking on a life of its own."

When Neville began working on Sauce, she still had a day job at Washington University Medical School. Every night after work, she would head home and code the site by hand. When the publication went to print in 2001, she was the designer, editor, photographer — whatever needed to be done.

As Neville explains, the St. Louis dining scene was a much different place in 2001, and she is excited to have had a front row seat for its evolution. One of the biggest changes she has seen is the elevation of the farmer in the dining process — something that we take for granted now, but was not always the case.

"I remember being at a farm dinner put together by an organization called Chef Collaborative at the Crossing early on," Neville says. "There was this farmer who had brought in beets and lettuce, and it was just like a lightbulb going off. The idea of putting farmers on a pedestal and highlighting what they grow was a real turning point."

Neville also recalls a time when the St. Louis restaurant community was more cutthroat, a climate that is the antithesis of today's collaborative spirit. "I remember when the St. Louis Originals launched. It was a game-changer because all of these independent restaurants were banking together to face the onslaught of chain restaurants coming to town," explains Neville. "It was difficult for some of the chefs because there was this mindset of 'Why should I help other places when there are only so many diners to go around?'"

These same naysayers had a similar critique of local food journalism, insisting to Neville that there simply were not enough people in St. Louis who cared about food. She proved them wrong, helping Sauce achieve a success she never dreamed of before departing the company in 2010 to launch her next project, Feast. She parlayed that success into the series Feast TV where she shares her passion for exploring culture through the people and places that make up the regional food and beverage scene.

The next step for Neville is bigger than she could have ever imagined: The development of a national television series called TasteMAKERS, focused on what she describes as the "maker movement" in contemporary food culture. For Neville, this phenomenon marks a new wave for the culinary scene, even as it impacts American culture in everything from clothing to tech. "It's not that chefs aren't the rock stars of the food industry, but there has just been so much coverage of chefs — and decent coverage of farmers," Neville explains. "But there just is not a lot of storytelling digging into the maker movement. When you look at what is happening in the food industry, people are deciding to become cheesemakers or tofu makers or distillers. They don't feel that they all have to become chefs to have that impact on the industry."

TasteMAKERS is currently in the funding stages, and though she does not want to give away too many specifics, Neville is excited about many things she has seen in the course of the series' development. From a woman in Florida making bean-to-bar chocolate to a woman in New Mexico doing varietal honey, she hopes the show will not only show the wide variety in American cuisine but also the diverse landscapes and cultures that make up the country.

Neville sees the makers movement as arising from a hunger for something real. "The word 'authenticity' is so overused, but what it means in this context is that something was made as an extension of someone's passion and drive to create. I think that's something we are all seeking. With so much that is artificial in our lives, we are hungry for something real."

Neville took a break from TasteMAKERS to share her thoughts on the St. Louis restaurant community, some of her favorite people and places around town, and why she always tries to be the one doing the interviewing.

What is one thing people don’t know about you that you wish they did?
I don’t really like to talk about myself. That’s why I’m usually the one doing the interviews!

What daily ritual is non-negotiable for you?
Coffee. First thing in the morning, I head downstairs and make coffee. Once I’ve had a sip or two, I’m ready to tackle the day ahead.

If you could have any superpower, what would it be?
The ability to see into the future.

What is the most positive thing in food, wine or cocktails that you’ve noticed in St. Louis over the past year?
I don’t know if it’s just this past year, but I’m excited about the explosion of creative, chef-driven restaurants serving personal and unique food. Nothing is more boring than going into a new restaurant and seeing that the menu is something like a checklist of expected stuff. I enjoy being surprised and intrigued by what a chef has created. Confluence Kombucha is a great example. If you haven’t been there yet, go, and get the tempeh and the nukzuke.

What is something missing in the local food, wine or cocktail scene that you’d like to see?
Our food scene is pretty diverse and extensive, but I would like to see more north African restaurants and more flavors from the Middle East. I would also like to see more local wine available in restaurants and bars. There are some outstanding wines made locally and they deserve to get more attention, just like locally-made beer and spirits.

Who is your St. Louis food crush?
This is a tough question. There are so many talented, inspiring people working in the culinary industry, but I’d have to say Nathaniel Reid. His work is truly world-class and he is one of the most humble, friendly people working in St. Louis right now. He could have set up shop anywhere in the country and he chose to come home and open a bakery with his wife. The team he has assembled came here to work with Nathaniel because of his immense talent, yes, but also because they share his vision for what a neighborhood bakery can be. He is the kind of chef people admire for the right reasons: He is dedicated to his craft, cares about his team and wants to have a positive impact on his community. And, it goes without saying, his pastries are perfection.

Who’s the one person to watch right now in the St. Louis dining scene?
I don’t think that there’s one person in particular to keep an eye on. I think it’s the entire scene here in St. Louis that deserves attention. It will continue to expand and evolve and it’s so interconnected that I don’t think it’s fair to pull out one single person. There is a lot of energy in St. Louis right now. Look at Kevin Nashan taking home the Beard Award this year, Nixta taking the No. 9 spot on Bon Appetit’s best new restaurant list and Vicia making national news as well. There are so many great places to eat and drink in St. Louis and the wider world is taking notice.

Which ingredient is most representative of your personality?
Remember how I don’t like to talk about myself? I honestly have no idea what ingredient reflects my personality.

If you weren’t working in food journalism, what would you be doing?
I’d be an archaeologist. I love discovery and travel and learning about other cultures and am a definite history nerd. When I was in college I thought I’d end up in archaeology or some similar career, and it turns out that I kind of did. Food reflects culture, reminds us of our history and tells us so much about who we are as a society. Being able to study and cover the culinary world allows me to indulge my interest in culture while I indulge my love of great food and drink.

Name an ingredient never allowed on your plate.
Anything fake, although there are some exceptions. See below.

What is your after-work hangout?
At home with a glass of wine, cooking dinner and enjoying being in the kitchen.

What’s your food or beverage guilty pleasure?
I don’t feel much guilt when it comes to food. I do love Cheetos, though. See above.

What would be your last meal on earth?
Tender, juicy roasted chicken with a salty, crisp skin; gooey, perfectly ripe bloomy-rind cheese spread on chunks of Union Loafers’ Light & Mild; and an insane bottle of wine.