Cheese Pizza at La Pizza and The Amazing Spider-Man 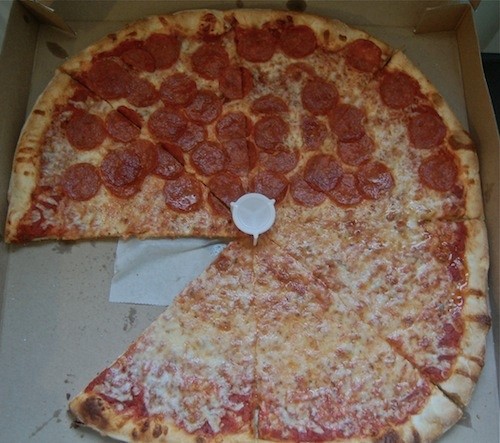 In May, Gut Check kicked-off the superhero leg of this summer's blockbuster season by seeing The Avengers in 3D and wolfing down a "Super Hero Sandwich" at Planet Sub (1805 Maplewood Commons Drive, Maplewood; 314-781-5725). The next notch on our big-budget superhero movie belt was whittled this week at a viewing of The Amazing Spider-Man in 3D -- Marvel Studios' second release of the summer -- at the AMC Esquire 7 (6706 Clayton Road, Richmond Heights; 314-781-3806). Though the film pulls its name from the mainstream continuity of the Spiderman franchise, it more resembled in tone and personality Marvel's millennium Ultimate Spider-Man series.

In tribute to the pizza-delivering Peter Parker of Sam Raimi's 2004 film Spider-Man 2 -- we, after all, hadn't watched the reboot yet -- Gut Check scarfed down a hand-tossed New York-style cheese pizza at La Pizza (8137 Delmar Boulevard, University City; 314-725-1230). 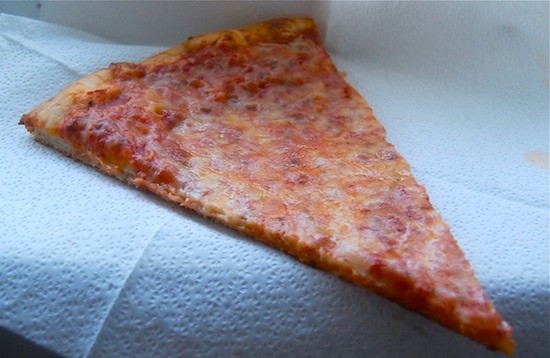 Aside from the choice to opt for geographically appropriate 'za and nod to Spider-Man 2, cheese pizza felt like an obvious pairing for Spidey as it oozes its own kind of stringy, stretchy elasticity when pieced apart from its sliced brethren. Also, despite the film's lack of corn-ball comic book movie styling, it's still a superhero film, which means it's, if at least subtly, full of cheese. Triangles of La Pizza pie are the way that New York intended them: gigantic, thin crust and bubbling with a thick layer of mozzarella. Per our superhuman eating abilities, Gut Check defeated a cool 50 percent of the pizza without help from a sidekick. In that way, we're exactly like Spider-Man. Except for the whole cross-species thing. The jury's still out on that.

But, hey, the Daily Bugle and New York's finest weren't sure that one masked vigilante was all there, either, and he did OK. In director Marc Webb's The Amazing Spider-Man , the origin story of Peter Parker (played by Andrew Garfield) is as important as his web-shooting alter ego. Not only is the mystery of his parents broached, but Dr. Curtis Connors is fleshed out in a way that none of Raimi's films touched. And though the Lizard isn't Marvel's most menacing villain, his story is so intertwined with Peter's that it lays a strong foundation for a sequel. Oh, and Emma Stone as foxy genius Gwen Stacy is a refreshing departure from Raimi's Mary Jane-centered films.