Chef Chat: Barry Kinder on Playing the Washboard and His Shameless SweeTart Habit 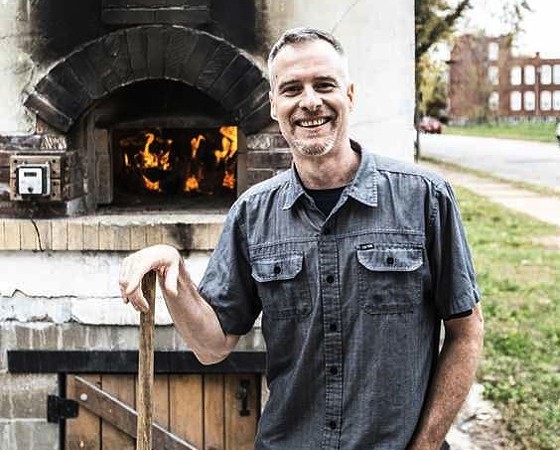 Barry Kinder was more likely to be a performer at one of Grove East Provisions' (3101 Arsenal Street; 314-802-7090) music nights rather than its owner. An accomplished drummer, Kinder spent several years living in London and touring Europe with various bands. No matter what city he was in, he relied on the neighborhood markets daily, whether to simply grab some beer and a snack, or to gather the fixings for a home-cooked meal.

When Kinder returned to St. Louis, he saw that these classic neighborhood bodegas were missing from the local food and beverage scene, so he decided to open one himself. He set up shop in Tower Grove East, peddling groceries and serving fast-casual comfort fare. Kinder took a break from making his soon to be famous chicken soup to share his thoughts on the St. Louis dining scene.

What is one thing people don't know about you that you wish they did? I play a pretty mean guimbarde [Jaw harp], and have been featured playing it on several albums. Most notably, on Dominic Miller's first solo album, First Touch. The guimbarde: not just for hillbillies and jug bands. I once had one in every key and would layer several parts creating harmonies. A symphony of guimbardes. I'm not too bad on the triangle and washboard, either.

If you could have any superpower, what would it be? I'd be "Voice of Reason Man" with the power to convince people to chill out and calm down -- and to do a little research before opening their mouth.

What is the most positive trend in food, wine or cocktails that you've noticed in St. Louis over the past year? There's a spike in clever folks creating really special products, using old school techniques. Bread, salami, sausage, beer, wine, spirits...these are a few of my favorite things.

Who is your St. Louis food crush? "Food crush" sounds a bit creepy, but someone I respect quite a bit is Mark Sanfilippo. Salume Beddu is outstanding. Everything they do is delicious. I always have a plentiful stash of their salami in the shop. Life is good.

Who's the one person to watch right now in the St. Louis dining scene? Not just one. Chris Sheets, Jake Marks and Jenny Wilson of Red Fox Baking make the best bread in St. Louis. They've accomplished so much in a very short time. I can't wait to taste what will come out of the oven next.

Which ingredient is most representative of your personality? A potato.

What ingredient is never allowed in your kitchen. Cool Whip -- I'd rather eat my pie straight up than put that crap on it.

What is your after work hangout? Tick Tock Tavern, the Shaved Duck, Riley's. If I can get talked out of leaving the neighborhood, I always enjoy Tina's company at the Mo Bar.

What is your food, beverage guilty pleasure? A grown man should not like SweeTarts as much as I do.

If someone asked you to describe the current state of St. Louis' culinary climate, what would you say? St. Louis has always been a great city for tasty grub. I don't get out of Tower Grove East much these days, but it seems as healthy as ever.

What would be your last meal on earth? I'd go to Eat Rite and order the whole menu.