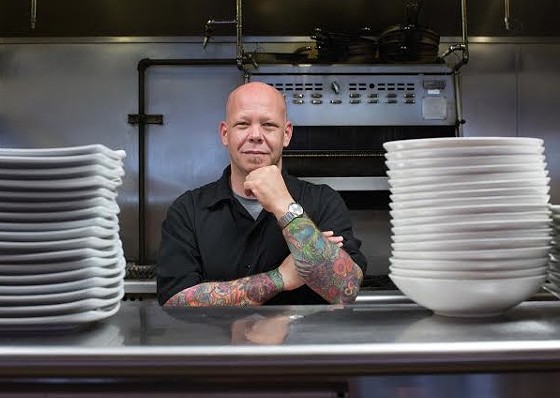 Modifications and special requests? "No problem," says chef D. Scott Phillips of Balaban's (1772 Clarkson Road, Chesterfield; 636-449-6700). In fact, he encourages people to ask for what they want. "I love it when people come to me and say, 'I had this dish at this one place years ago,' and ask if I can recreate it for them."

It's no surprise that Phillips nails these requests. The Johnson & Wales graduate and kitchen veteran has the restaurant business in his blood. The son of a food consultant, Phillips was always drawn to the industry, starting out as a dishwasher at a cafeteria, working his way through culinary school and eventually helping his dad with the family food-consulting business. He couldn't stay away from the kitchen, however, and eventually made his way to the former Provisions Gourmet Market where he served as executive chef for eight years. Now, as the head of culinary operations for Balaban's, Phillips gets to bring his brand of hospitality to the loyal patrons of this St. Louis institution.

Phillips took a break from working on one of his famous wine dinners to share his thoughts on the state of food in St. Louis, his distaste for "bachelor" spices and his second calling as a painter.

What is one thing people don't know about you that you wish they did? How artistic I am. Not just with food -- I paint, draw, do watercolors.

What daily ritual is non-negotiable for you? Rockstar Energy Drink. I don't know how many I have a day but, for sure, one in the morning.

If you could have any superpower, what would it be? Clearly, who wouldn't want to fly? But, I'd want to fly to a beach.

What is the most positive trend in food, wine or cocktails that you've noticed in St. Louis over the past year? More comfort food. Meatloaf, for example, where you don't expect to find it. We're going back to the basics and food fundamentals; the detour with molecular gastronomy stuff is in our rearview mirror.

Who is your St. Louis food crush? Tani Sushi Bistro on Bemiston, for a restaurant; I like it a lot. I don't go out that often.

Who's the one person to watch right now in the St. Louis dining scene? This kid, J.T. Gelineau. He's a young chef who is cultivating mushrooms in his warehouse. Working with at least eight different varieties of mushrooms, he's really on top of mushrooms and started this new business, Mushrooms Naturally.

Which ingredient is most representative of your personality? Cayenne pepper. ("But, D. Scott, you're so nice and easy to work with.") Well, sugar because I'm so sweet. How about sugar?

If someone asked you to describe the current state of St. Louis' culinary climate, what would you say? That's hard to answer. With fried chicken coming on menus, I guess we're going back to the classics. For a while, basic food skills rested so far down the chain. Now, that's changing. We don't lack the basic skills anymore. And cultural diversity in restaurants continues to grow; we've got multiple nationalities represented in our restaurants from Afghani to Nepalese to Korean. That's really changed since Balaban's first opened in 1972.

Name an ingredient never allowed in your kitchen. Lemon pepper or any bachelor spices don't get into my kitchen. I want my spices pure and real. Every bachelor I know slaps lemon pepper on their chicken and everything else.

What is your after work hangout? I don't really have one except for my couch in Creve Coeur. Although incredibly uncomfortable, my couch looks great. That's why I bought it -- because of how good it looks, with its stainless steel frame and black leather cushion.

What's your food or beverage guilty pleasure? Ice cream, any flavor. And, if you want the truth, what I really like is the hot fudge sundae at McDonald's.

What would be your last meal on earth? Clearly, I'm a man of simple tastes, so I'm tempted to list my favorite fast food -- but something Cajun. Definitely dirty rice. I like the spice and the flavor of it. I lived and worked in New Orleans.