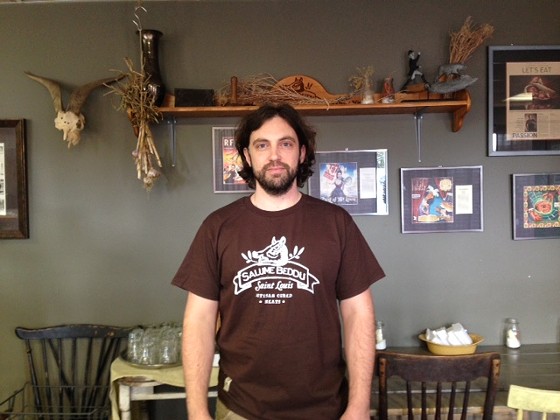 Mark Sanfilippo, the man behind Salume Beddu(3467 Hampton Avenue; 314-353-3100), didn't set out to be St. Louis' king of cured meats. The former academic spent years studying Hegelian philosophy and German, priming himself for a career as a professor when reality set in. "There are only two or three philosophy jobs in the country available any given year," Sanfilippo explains. "I realized that my chances of becoming a professor were pretty slim."

His decision to pursue writing led him to Los Angeles, where he had some success as a screenwriter. "I had the whole L. thing -- the agent, the manager, the lawyer," Sanfilippo recalls. Then he saw an open call for Mario Batali and Nancy Silverton's new restaurant Osteria Mozza and was instantly drawn to apply.

"Cooking has always been my passion. I was the first person in line at the open call, but i had to convince them that I wasn't just some academic. I told them that I didn't have much experience but that I would do whatever." Sanfilippo laughs when he recalls his first day. "They had me spend the entire day peeling garlic and scaling fish, I think just to see if I would do it."

When the cured meats position came up, Sanfilippo maneuvered himself to take on that role. The restaurant was so busy he only had time to do basic things there, so he began experimenting at home. "I turned the closet of my Los Angeles apartment into a curing room," he says.

Sanfilippo was inspired to return to his native Missouri when he found out Batali's source for pork. "Batali gets all of his pork from a place in southern Missouri," Sanfilippo explains. "It struck me that we had such a wealth here in my home state, so I decided to come back."

He began making cured meats out of his home, selling his wares at farmers' markets and making a name for himself with local chefs. Eventually, he got big enough to open Salume Beddu on Hampton Avenue, which serves as his production facility, shop and cafe. "We're growing out of our space," he acknowledges. "I have six- to seven-thousand pounds of meat curing in there as we speak."

Sanfilippo took a break from crafting Salume Beddu's cured meats to share his thoughts on the St. Louis food scene, his unconventional view of a last meal, and his penchant for funny socks.

What is one thing people don't know about you that you wish they did? I like wearing ridiculous socks. I have a friend in Japan who sends me wacky Japanese socks and I collect some on my own. Not sure why, but there is something satisfying about having goofy socks on.

What daily ritual is non-negotiable for you? Espresso has to happen first thing in the morning. On the lucky days one of my sons will help me make it.

If you could have any superpower, what would it be? Space/time travel. It would be amazing to be able see the past and the future. I would love to see ancient Rome and Greece.

What is the most positive trend in food, wine or cocktails that you've noticed in St. Louis over the past year? Specialization. We have folks doing specific things and trying to work them to perfection, and I think that is a hugely positive trend. I'm never more leery of restaurant than when it tries to be great at everything. It's rarely a good sign when the menu is more of a book and has everything from sushi to pizza and ribs. Places like Pappy's Smokehouse, or Pastaria, Planter's House, or [Kevin] Nashan's new place Peacemaker are great examples of taking a specific defined conceit and running with it and making it as excellent as possible.

Who is your St. Louis food crush? Mark [Attwood] and Stephanie [Fischer] over at Comet Coffee. His coffee is amazing, and her pastries are second to none. There's a care and attention to detail there that is intensely focused and done purely for the sake of the product. They are making amazing things just because they feel it's the proper way to make them, not because they want to get in a magazine or get national attention. I'm sure those things will come once everyone realizes how great their stuff is.

Who's the one person to watch right now in the St. Louis dining scene? Mateo Daughaday [Taste]. He's unassumingly putting out some of the best-executed dishes I've had in a while. I like that most of his plates are simple but perfectly done and not too precious.

Which ingredient is most representative of your personality? Chiles. I'll leave that open to interpretation.

If someone asked you to describe the current state of St. Louis' culinary climate, what would you say? Exciting. There are some really great things going on here and I think it's creating a healthy -- and friendly -- competition to make even better food. More people are shooting for excellence and wanting to make personal food, food they want to eat, as opposed to showcase food or food that might latch onto a national trend. I find that tremendously encouraging and inspirational.

Name an ingredient never allowed in your kitchen. Food ingredient: garlic powder. It's awful, and immediately identifiable in the unfortunate food it ends up in.

Non-food ingredient: laziness. It is so much work to cook anything; I feel like it only takes 10 to 15 percent more effort to make something that is OK, excellent. If you're going to all the trouble anyway, why not just put in a bit more effort to make it amazing? There's no point shooting for what I like to call aggressive mediocrity.

What is your after work hangout? My house with my family and some wine.

What's your food or beverage guilty pleasure? French fries. I'll eat the good, bad and the ugly. I can taste the difference, but I'll eat them all regardless. I'm not proud of that.

What would be your last meal on earth? I have two answers to this:

Or I could go the route of Giuliano Bugialli, who, when asked this question, stated that he would want his last meal to be nouvelle cuisine and "bastardized Italian food" so that he would be more than happy to say goodbye to the world.