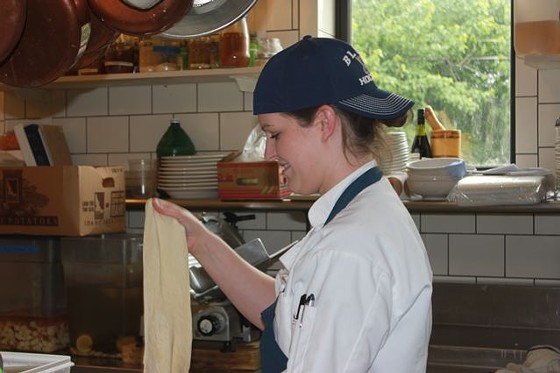 "Technically, I'm now the special events coordinator," says Carrie Whitcraft from the Winslow's Home (7213 Delmar Boulevard, University City; 314-725-7559) kitchen, freshly made pasta dough in hand. "As you can see, I get pulled back in quite a bit."

Whitcraft's new role at Winslow's Home may transition her away from a daily spot on the line, but it's impossible to keep her out of the kitchen. And it would be a shame to do so. The former sous chef's culinary prowess has earned her spots in some of the city's top kitchens: Westwood Country Club, (the now-shuttered) Mazara and Sidney Street Café. She has locked down a reputation as a rising star in the St. Louis food scene.

What is one thing people don't know about you that you wish they did? I'm hilarious.

What daily ritual is non-negotiable for you? Twenty to 25-minutes of amplified heavy metal on my way to work.

If you could have any superpower, what would it be? The ability to communicate with animals.

What is the most positive trend in food, wine or cocktails that you've noticed in St. Louis over the past year? People wanting to know where their food comes from and how it's raised and grown. Provenance of ingredients is paramount for chefs who strive for quality, and the public is catching on by buying their food more responsibly and locally whenever possible.

Who is your St. Louis food crush? Not so much a crush as someone I have the utmost respect for, Chris Bolyard -- hands down.

Who's the one person to watch right now in the St. Louis dining scene? Both Joshes [Galliano and Poletti] at the Libertine.

Which ingredient is most representative of your personality? My mother-in-law will hate this: Mushrooms. They have depth and taste the best when prepared simply.

If someone asked you to describe the current state of St. Louis' culinary climate, what would you say? It's St. Louis' time to be recognized on a national level. There is a flurry of genuinely awesome restaurants that range from barbecue joints to fine dining establishments.

Name an ingredient never allowed in your kitchen. I'll admit, I hate kohlrabi, but it would still have a place in my kitchen.

What is your after work hangout? At home with my husband and daughter.

What would be your last meal on earth? Really good sushi.