He can't tell us his full name. Call him Chef John. He doesn't have a sleek stainless-steel kitchen; he works from a tiny square kitchen just like the ones in houses all over south St. Louis. Staff? They're friends who lend a hand.

And yet this former theology scholar and barista has brought the trend of underground dining to St. Louis with his Entre:Underground dinners. Since August 2008, he has used an ever-growing list of e-mail contacts to spread the word of his dinners, only revealing to diners the location on the day of the meal.

"You've got to get on the [e-mail] list. I've never said no to anybody," Chef John says as we share a French press in his bright kitchen space, where family photos are stuck to the fridge with magnets. "You've got to find us. And even the people on the list don't know where the dinner is unless they're coming. There are multiple steps to narrow the field. I think it would qualify as a private dining club. I always called it a donation. We're relying on people's character.

"I had no intention of making it a 'thing,'" he says. "It was just for friends. I sent out fifteen e-mails, so roughly thirty people. I thought I'd market it to folks I know. One of the guys that I invited was friends with George Mahe [food writer for St. Louis Magazine]. So he invited George, and George wrote about it, so that was that." 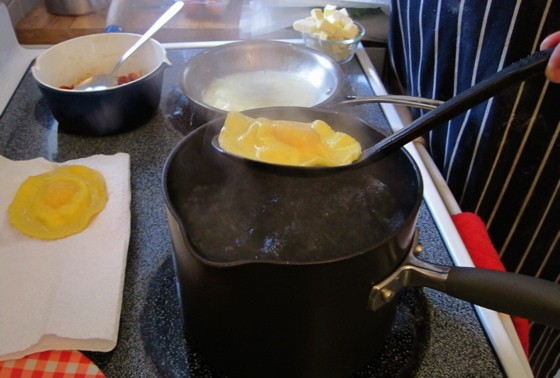 Chef John has always loved to cook and entertain, but at age 29 the idea of trying to support his family with a $7 an hour job as a prep cook wasn't feasible. Neither was opening a traditional restaurant. Underground dining "seemed like a perfect solution to my funding problems. Paying for ingredients is hard. If I could find a way to do it just for friends for a certain amount, then I could cook with certain ingredients. I could learn."

His dinners are still more dinner party than restaurant. There's a set menu, often focusing on one meat. On this particular night, Chef John and his sous chef were scheduled to break down a whole hog on his kitchen's work island for that weekend's "Snoot-to-Tail Dinner." He posts the menu on his website in advance when he can, and there are few substitutions.

"I can't cook things like I would in a restaurant. I can't do single orders," he says. "This is the menu. Sorry if you don't like it. See you next time. For the most part, there's been a very small fraction of people who didn't respect that. The second dinner we did, we had three vegetarians and only one of them told me ahead of time.

"It's that trust relationship. I want that to be something I develop with people. For the longest time, I was a picky eater. I said to some of the guys in our kitchen that if you don't like something, you've probably never had a good version of it. What we're trying to do, in our own way, is make a good version of what people don't like so they can break out of the strictly meat and potatoes thing."

He's starting early with this idea with his own children. Easy to do when the cooking's happening at home. "We did a lamb dinner. [Sous chef] Chris and I were breaking down a lamb right here, going at it with a cleaver. And my daughter, she's four, she's like, 'What is that?' I said that it's a lamb and she said, 'Yummy!' I love it."

She'd probably fit in with the diners attracted to Entre:Underground's dinner. Anywhere from eight to 38 people gather at the same table for the meal. "We get very few people that are introverts," Chef John says. "Everyone comes with an interest and willingness to strike up a conversation. I can't tell you how many people have left there exchanging phone numbers and making plans to meet. That's awesome. It's bringing people together. You give them something in common -- the food -- and they sit together for three hours. For me that's it. That's the fundamental of what eating and dining together is all about."