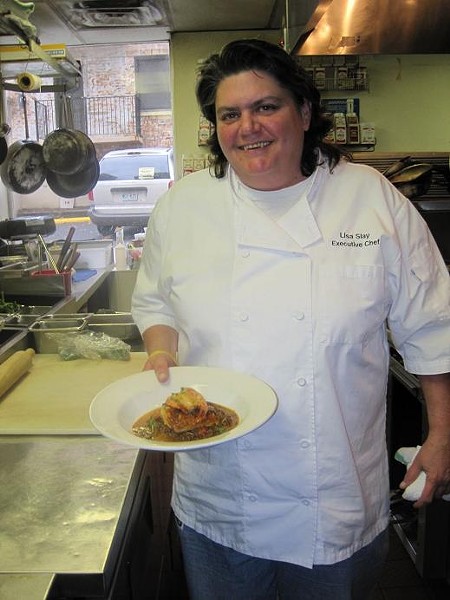 Robin Wheeler
Lisa Slay, Executive Chef of Remy's Kitchen & Wine Bar
Unless you moved to St. Louis three hours ago, you know the Slay name, whether from the mayor or from the family of chefs and restaurateurs who have worked in the city for a century. Humble and down-to-earth, chef Lisa Slay of Remy's Kitchen & Wine Bar defies the image of what it means to be a member of one of the city's most well-known families.

Her career began at age twelve, working for her father at Slay's Restaurant on weekends and gradually learning to cook. After half a semester at Southeast Missouri State University on a basketball scholarship, Slay decided school wasn't for her. She returned home months before her father's untimely death. She stayed close to home to be near her mother during this difficult time and worked for her brother, David.

While working with her brother, she forged a working relationship with his bar manager, Tim Mallett. When David Slay moved to California in 1988 and Mallett took over his restaurant space, Lisa stayed on to decide what she wanted to do next. She never left. In 1995, Mallett opened Remy's, giving Slay the opportunity to expand her vision.

"When we opened Remy's, [Mallett] said, 'What do you want to do? Do whatever you're comfortable with,'" Slay explains. "With Remy's I got to design the kitchen, order all the china. I'd opened restaurants with my brother, but Remy's is like my baby.

"Tim and I really clicked early on. He knew a lot about business, and I knew how to cook, so we made a good pair. For the longest time I couldn't imagine doing all of it because the kitchen is so much. It's constant. Even if you have a slow night, you're still busy. I gave him the respect he deserved, and he gave me the respect I deserved, and he pretty much let me do what I wanted."

That included a return to Slay's Lebanese roots with a Mediterranean-inspired menu of small and large plates. "It was something different to St. Louis at the time, and I had some family background in it. Fifteen years ago nobody knew what couscous was. No, give me some potatoes." 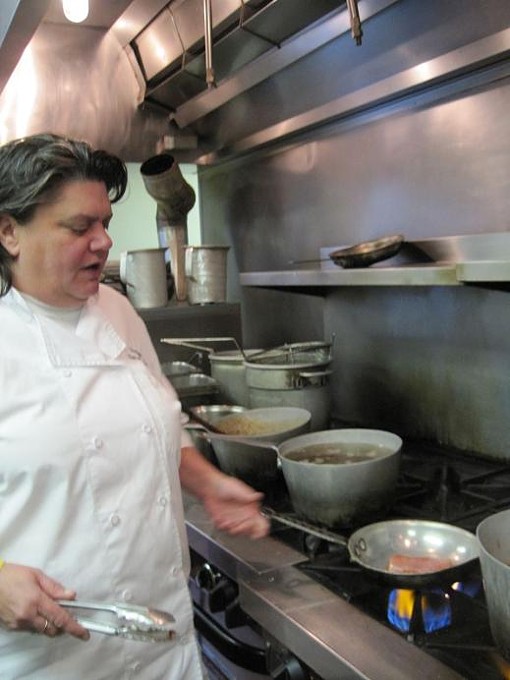 Robin Wheeler
While the Mediterranean approach has changed over time, Slay's commitment to her staff hasn't. On a busy morning, prepping for the Clayton lunch rush, her staff smiles when she walks into the kitchen. They joke with her. She puts an arm around a server she hasn't seen in a while and verifies that she's OK. It's no wonder that much of Slay's staff has been with her for more than five years -- a rarity in the restaurant business.

"I try to surround myself with good people who don't dread going into work and seeing this one or that one. I wouldn't have them working here." She laughs. "They all feel pretty much the same way. If someone starts getting any kind of attitude, I'll sit them down and say, 'Look, you want to be here or you don't. We all have our own problems. But when we're here, we're here, and we'll have fun. If I can help you with your problem, I will, but otherwise leave it out there. This is hard enough work. You need to have fun.'"

Robin Wheeler
Even though her role as "Culinary Driving Force" for Remy's and Big Sky Cafe (Mallett's other restaurant) keeps her from being in the kitchen full-time, she still spends time in Remy's kitchen when it's busy and is always tasting, watching and bringing her sense of fun. Sitting in Remy's dining room, you'll find it impossible not to notice the laughter coming from the semi-open kitchen.

"You didn't hear me banging my tongs? Or yelling out about the baseball game? A few times I've yelled, 'Grand slam!' and everyone's like, 'Lisa!' But the ballgame's on!"

True to her St. Louis roots, Slay is a huge Cardinals fan. She also loves spending time barbecuing in her backyard. "On Sundays I can hang by the pool. It's Sunday Funday! You never know who's going to show up at my house. My family's always coming over. We hang out and cook. Love to barbecue."

Slay still has her professional kitchen chops. During my visit, she couldn't decide what to make. We bounced around the kitchen, exploring this and that: a batch of lamb-stuffed grapevine leaves being made from her grandmother's recipe, feta mousse on fried Lebanese bread, curried chicken for Mediterranean club sandwiches. Before I left, she insisted I take bread pudding with both caramel and hard sauces as well as tapenade with crostini. 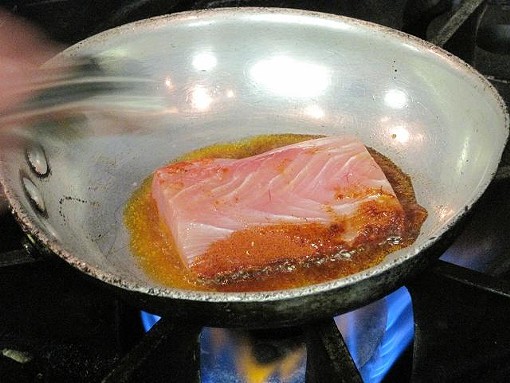 Robin Wheeler
For her recipe, Slay decided to go with one of her favorites, Bronzed Mahi: a piece of fresh mahi mahi crusted in a smoky, peppery blend of seventeen spices pan-seared for crispiness and then lightly roasted for a moist, delicate finish. It's served in a light sauce of white wine and butter, atop an earthy pool of French lentils and itself topped with two lightly seared jumbo shrimp. When we walked through the restaurant with the plate, every employee we encountered commented on the mahi mahi, their favorite.

Remy's has won Wine Spectator's Award of Excellence for the past eight years, so of course there was wine. Navarro "Edelzwicker," a blend of riesling, gewürtztraminer, pinot grigio, and muscat provided a light sweetness to balance the robust spice of the mahi mahi, while the slightly sour viognier and Marsanne of d'Areberg "Hermit Crab" gave a bright, palette-cleansing burst of sunny dryness.

Even though Remy's has always been known for its wines, Slay's just recently ventured out of the kitchen and behind the bar. Having worked on wine dinners and pairings for years, she's now working on the wine lists and doing some of the wine ordering. "I guess when you're in this business for a long time -- and I've been in it for a very long time -- you have to challenge yourself and do different things or you get burnt out," she says. "But I still love it like I did 30 years ago."

That challenge includes removing herself from the kitchen and spending time on the floor with her guests, a role that suits her gregarious and hospitable spirit. "For so many years I've been back there and I hear from servers that they [guests] loved it. It's nice to be able to be out and talk to people, help them figure out what they're going to have, or being able to say, 'I've got something in the back. Let me make it for you.' I'm letting them into my home. I'm here more than I'm at my real home. This is really home, except I can't bring my dogs."

Robin Wheeler writes the blog Poppy Mom and is a regular contributor to Gut Check, including the columns The Dive Bomber and Throwback of the House.