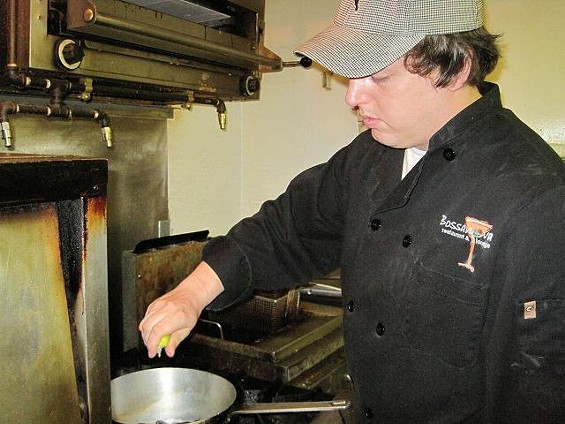 Robin Wheeler
Jarvis Putnam of Bossanova Restaurant & Martini Lounge
Did your family cook when you were a child? If so, what meals stand out? It was always a big deal when my mom made manicotti, but aside from that, my mom and sister both make great homemade soups. In particular, my mom makes an Italian fish soup called cioppino with shrimp, clams and orange roughy. It is still my favorite soup to this day.

How old were you when you started cooking? About 9 or 10 at home, my first line cooking job when I was 15.

What was your first kitchen job? Dishwashing at Chris McD's Bar and Grill.

Did you attend culinary school or college? No.

What do you eat? Everything. It's a part of my job to try new things and to eat a variety of foods. I guess if there's one thing I eat the most, it's pizza. I never tire of pizza. Does anyone?

We'd be most surprised that you eat pork rinds.

What do you cook at home? Whatever I can get my fiancée to eat, mostly old-school classics: meatloaf, burgers, spaghetti, enchiladas, that sort of thing.

What are your 3 favorite restaurants in St. Louis, besides yours? Gentelin's on Broadway (Alton, IL), Princivalli's Cafe (Alton), and a list of Asian restaurants too numerous to mention.

Local chef who most impresses you? Ryan Gentelin. His restaurant in Alton is a near-perfect white-tablecloth dining experience.

Most essential ingredient in your kitchen? Superlative flour.

Favorite local ingredient and where you get it? Morel mushrooms, whoever's selling.

One food you dislike. Baby corn.

One food you can't live without. Pork. To paraphrase Homer Simpson, the pig is some kind of magical animal.

What's the first rule for your kitchen staff? We don't have time for bad habits, except drinking and smoking.

What ingredient will never be allowed in your kitchen? Velveeta.

Culinarily speaking, St. Louis has the best... Fried food, home of toasted ravioli, crab Rangoon and fried catfish; St. Louis's prowess in fried foods is second only to the British.

Culinarily speaking, St. Louis has the worst... For a town on the river, it could have a better freshwater fish market. The lack of which may be attributed to the stigma surrounding river pollution, whether warranted or not.

Your best tip for home cooks? For trying recipes for the first time, get four or five recipes of the same dish, figure out what they all have in common, then add or omit any extra ingredients based on your own personal taste.

Your favorite after-work hangout? Chez Marilyn's and Don and Penny's.

One person, dead or alive, you'd love to cook for? My father and his father.