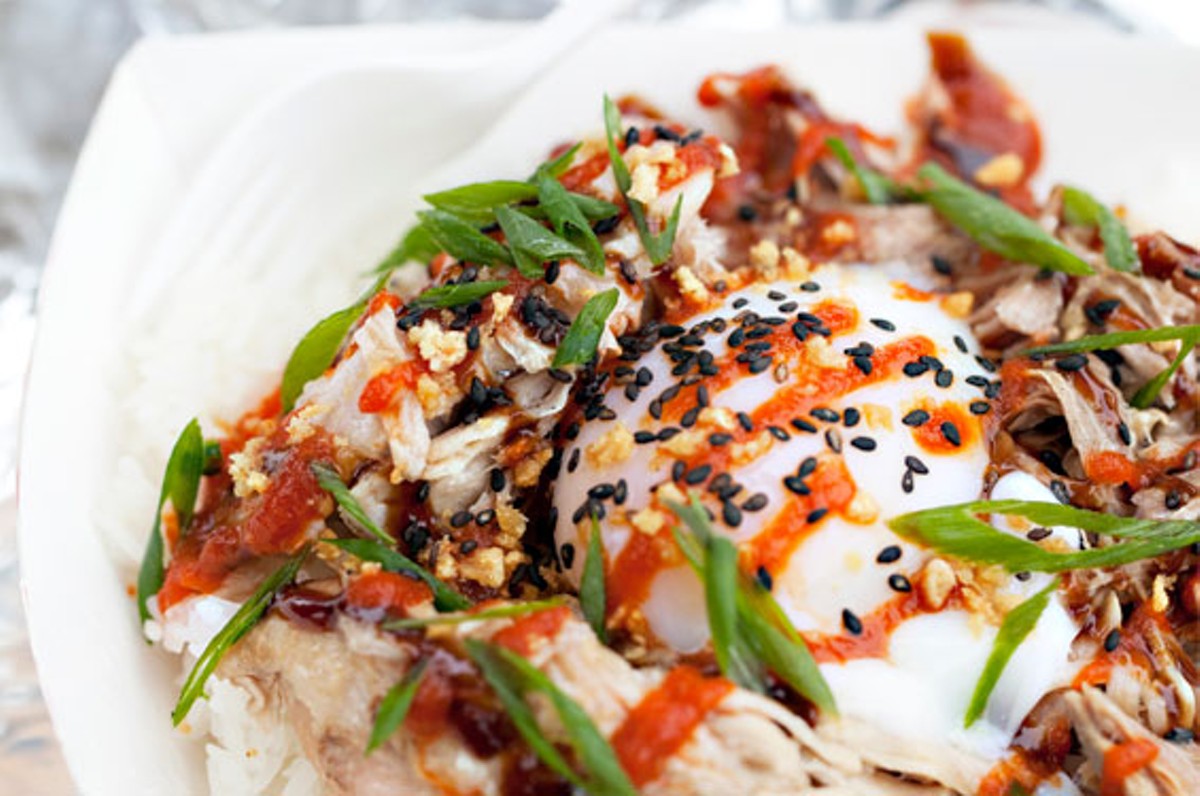 Has the U.S. economy finally turned the corner? Don't ask me. I can't even reconcile my bank statement. Still, my accounting of the best dishes from the new restaurants I reviewed in 2012 features several establishments of impressive scope and ambition — in other words, not the sort of places you open when would-be diners are choosing Hamburger Helper. And the trend is set to continue into the early months of 2013.

Not that this year's standouts were all on the high end. The list includes a bakery so small that it barely has room for the bakers, a Vietnamese restaurant inside a Burger King and a dish — the year's best, in fact — that you'll need Twitter to locate.

10. Oatmeal cream pie at Pint Size Bakery & Coffee (3825 Watson Road; 314-645-7142) The oatmeal cream pie at self-described "punk-rock grandma" Christy Augustin's tiny bakery is two oatmeal cookies, delightful on their own, sandwiched around a layer of marshmallow-fluff buttercream that will kick your brain into Proustian nostalgia overdrive. One is probably enough for two people to share, but order two just in case. (from "That Oven Feeling," September 6)

9. Pambazo at Siete Luminarias (2818 Cherokee Street; 314-932-1333) A version of the classic Mexican torta — though before you assemble a pambazo, you soak the bread in a guajillo-chile sauce, giving it a distinctive red hue and a mild kick. The pambazo comes with your choice of meat (steak, chicken, chorizo or pork skin), pinto beans, chopped potato and carrot, lettuce and crema. The ratio of meat to vegetable is just right — it's a big sandwich, but not overwhelming — and the sauce gives the meat and earthy vegetables a pleasant bite. (from "Seven Heaven," March 15)

8. "Dad's Green-Chile Cheeseburger" at Five Star Burgers (8125 Maryland Avenue, Clayton; 314-720-4350) "Dad's Green Chile Cheeseburger" — the recipe comes from owner Steve Gontram's father — features Hatch chiles from New Mexico in three ways: a layer of raw peppers beneath the burger; a layer of battered and deep-fried chiles atop the patty and its two slices of pepperjack cheese; and, on the side, a green-chile mayonnaise. The chiles add heat, of course, but the fried chiles provide textural contrast, while the mayo gives another layer of lusciousness to the meat and melted cheese. It's a great burger. (from "Stellar Work," December 13)

7. Pho at St. Louis Pho (3863 South Grand Boulevard; 314-664-4041) On a weekday afternoon at St. Louis Pho, even the Vietnamese pop ballads blasting from the television speakers can't entirely obscure the business of eating pho: the clinking of chopsticks against the rim of the bowl as diners stir bean sprouts, fresh basil leaves and shreds of sawtooth herb into the broth; the squelching of bottles of Sriracha chile sauce and hoisin; and, of course, the slurping and slurping of rice noodles. If you're sitting down to lunch, the noises can lull you into a trance: You Must Order Pho. The broth is so good — rich without being heavy, its meaty backbone rounded out with warm, sweet notes of cinnamon, ginger and star anise — that you might hesitate before doctoring it with herbs, raw jalapeños and lime. (from "The Sound and the Curry," August 2)

6. "Spicy Wonton Soup" at Famous Szechuan Pavilion (8615 Olive Boulevard; 314-685-0888) "Spicy Wonton Soup" betrays its chile heat in the vivid orange-red of its broth, in which bob plump little wontons stuffed with ground pork. Szechuan peppercorns lurk at the bottom of the bowl; stir them up and the soup suddenly explodes with their complex, unique flavor (sort of citrusy, sort of floral — sort of reminiscent of gin), not to mention their unique sensation: a tingling numbness that spreads across your tongue and the roof of your mouth. (from "Humble Heaven," September 20)

5. Grilled quail at Blood & Sand (1500 St. Charles Street; 314-241-7263) At Blood & Sand, Chris Bork's cooking reveals a chef both confident enough to indulge his creative instincts and smart enough to let quality ingredients speak for themselves. His grilled-quail entrée features a bird so fully flavored that you just want to eat it straight off the bone. Bork deepens this flavor with a smoky-sweet mole sauce and, for contrast, pickled pear. Yet as terrific as the quail is, you might remember even more fondly the miniature tamale that accompanies it. The masa is perfectly moist, thanks in no small part to the fact that it has soaked up bacon fat. (from "¡Olé!" October 11)

4. "Pork Porterhouse" at Cleveland-Heath (106 North Main Street, Edwardsville, Illinois; 618-307-4380) The pork chop "porterhouse," topped with a sunny-side-up egg and served over jalapeño-cheddar bread pudding, perfectly captures Cleveland-Heath's aesthetic of elevated comfort food. The Berkshire pork is exceptionally flavorful and, cooked to a blushing-pink medium, very juicy. The texture of the bread pudding is reminiscent of fry bread, and like fry bread it is sinfully luscious, in this case from the pork's juices. And a fried egg makes just about everything better. (from "Comfort Shmumfort," February 16)

3. Steak tartare at Little Country Gentleman (8135 Maryland Avenue, Clayton; 314-725-0719) A small mound of steak tartare sits at four o'clock on the broad rim of a large plate. Here and there specks of chopped cilantro stems dot the meat with green. Three thin rice crackers jut out at odd angles. Atop the tartare glistens the dusky orange yolk of a quail egg. At the center of this plate, in a shallow indentation, is an amber daikon-radish consommé. Per your server's advice, you spoon the tartare through the consommé, and the daikon's mild sweetness and hint of earth pairs beautifully with the meat's mineral sharpness, while the silken egg yolk, no bigger than a quarter, gives the dish a luscious, lasting body. (from "Esprit de Course," December 20)

2. Chitarra at Pastaria (7734 Forsyth Boulevard, Clayton; 314-862-6603) You could easily overlook the most exciting dish at Pastaria. The menu calls it simply "Chitarra" and offers no further description aside from a list of the supporting ingredients: olive oil, garlic, chile. In this case, though, such a list is apt because the dish brings nothing but strands of pasta alla chitarra tossed with olive oil, slivered garlic and chile flakes. Its beauty and charm is its simplicity: the lightly chewy pasta coated with the fruity, nutty oil, the garlic softened to a very mild bite, just a pinch of chile heat. Which is why the chitarra is so exciting: It's the perfect introduction to what simple, casual and affordable Italian food should be, not the limp, oversauced slop it all too often is. (from "Using Their Noodles," December 13)

1. The "Flying Pig" at Guerrilla Street Food (@GuerrillaStreet; www.guerrillastreetfood.com; 314-529-1328) A food truck atop the year's list of best dishes? Put down the pitchforks, hipster-haters. That Brian Hardesty and Joel Crespo's Guerrilla Street Food is part of the ever-expanding fleet of St. Louis food trucks might be the least interesting fact about it. The "Flying Pig" is Guerrilla's standout dish: tender slow-roasted pork on a bed of jasmine rice, the meat's natural flavor subtly spiced and then spiked with chiles, Sriracha sauce and calamansi (a lime-like citrus fruit). And that slow-cooked egg on top, which has a texture like no other egg you've ever eaten: White and yolk are thick and supple, like custard. I'd happily eat one of these eggs on its own; deployed in tandem with the pork, it fully justifies the dish's name, elevating it to 2012's summit.