Some of Su Hill's most foundational memories happened in her mother's kitchen in Chiang Mai, Thailand. A revered home cook who was trained in the domestic arts in Thailand's Grand Palace, Hill's mother would spend innumerable hours painstakingly preparing traditional Thai cuisine, selecting herbs from her garden, grinding spices, making curry paste, dicing vegetables and then dicing them again. It was tedious work — and to Hill, it was absolute drudgery.

Looking back, Hill admits that she did not appreciate her mother's lessons at the time of her instruction. A teenager more interested in doing the opposite of what her parents wanted her to do than in trekking down their well-worn path, Hill would always ask her mother why they had to do all of this work. Even after getting into the restaurant business herself in the United States, Hill had not fully embraced her mother's teachings in traditional Thai cooking, and, instead, opted to work for Italian and pan-Asian restaurants in hotels throughout New York, the West Coast and Memphis.

In the early 1990s, Hill settled in Cape Girardeau to take over her brother's small noodle shop. After running that for three years, she moved the restaurant to a larger space and rebranded it as Bistro Saffron, a pan-Asian eatery whose mix of Thai, Korean and sushi packs the house to this day.


Hill might have been satisfied with Bistro Saffron were it not for an awakening that happened after her mother's death a few years ago. Struck by the reality that she could no longer simply pick up the phone to talk with her mom, she began thinking of the ways in which she could still feel her presence. Food was the obvious thread that bound her to her late mother, and she felt an overwhelming sense of duty to share her legacy with the world. As Hill thought through how she could go about doing that, it became clear that she should open a restaurant dedicated to honoring the traditions that were now in her hands.

Chiang Mai is that homage to Hill's mother. The restaurant, which opened in Webster Groves last October, is unlike any other Thai restaurant in town in that it is deeply personal, rooted in the family recipes Hill absorbed all those years ago, even when she didn't know she was doing so. Focused on the dishes that, for Hill, define the cuisine of her hometown, the restaurant is a soulful showcase of northern Thai cuisine that differs from the more Bangkok-inflected dishes that are commonly seen in Thai restaurants throughout the United States.

To bring her vision to life, Hill relied on another family connection. Her sister, Nippon Tei owner Ann Bognar, previously owned Tei Too, the restaurant that occupied the storefront where Chiang Mai now sits. Bognar sold the space to Hill, who began work on converting it to its current iteration not long before the pandemic shuttered restaurants across the area last March.

Though the delay was frustrating, Hill admits it gave her time she didn't realize she needed to perfect her recipes. No longer a rebellious teenager, Hill reveled in the work that went into preparing the dishes the way her mother did, feeling that doing so was a way to have her there in spirit, if not in physical form. The result of her efforts is not only a window into northern Thai cuisine; it's an utterly delicious journey into her mother's kitchen that makes for one of the city's most memorable dining experiences.

Chiang Mai's offerings are one revelatory delight after another that simultaneously comfort and light up the palate. Nua sawaan, for instance, is a masterful dish that features coriander-dusted strips of beef that are accented with palm sugar and sea salt, then flash-fried to give them a crispy exterior. Piquant pickled vegetables are served alongside the beef, offering a burst of fiery refreshment that cuts through the savory meat.

Hill's sai oua shows the glaring difference between housemade and mass-produced sausage. Here, rustic cut hunks of pork are mixed with fresh herbs and searing spices, then stuffed into a snappy casing; each bite coats the tongue in lemongrass, chiles and sweet pork fat. It's electrifying.

Saikoo sai moo, or tapioca dumplings, are delightfully sticky balls of minced pork and peanut, spiked with just enough chili heat to make the mouth tingle, but not burn. Even the straightforward pho piah todd are dazzling. The flaky, cigar-shaped cheese rolls evoke crab Rangoon and are especially noteworthy thanks to the accompanying sauce, a delicate sweet and sour condiment deepened with funky fish sauce.

The above-noted small plates set the tone for an epic feast of entrée-sized dishes, like the gra dook moo. These tender baby back ribs are roasted with honey and garlic that forms a sweet and earthy glaze that tastes like a beautifully funky caramel. A beef massaman curry paired cubes of fork-tender meat with anise-scented sauce; slivers of cashews accented the dish, providing a pleasant crunch.

Hill may be unafraid to use spice, but her mild dishes prove that she does not have to rely on such firepower to coax deep flavor from her ingredients. A simple platter of crab and shrimp fried rice is warm, fluffy and scented throughout with the gentle flavor of shellfish. Chicken noodle soup is a bowl of pure comfort; the subtly sweet broth, tender chicken, noodles and bean sprouts make you feel as if you are being enveloped in a hug. 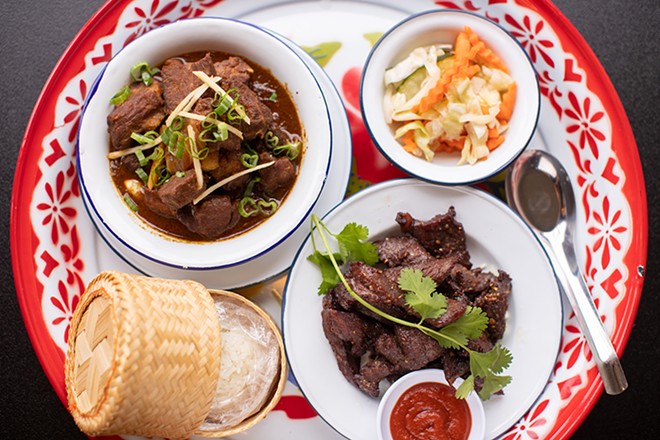 Though all the dishes are special to Hill, the gaeng hung lay stands out because of how much it reminds her of her mother. Using the exact same technique to create the exact same flavors, the dish pairs braised pork that is so tender you could spread it on bread with garlic and ginger-forward curry. The result is an absolute masterpiece that is the most stunning tribute Hill could ever make to her mother.

When you order that pork — or really anything at Chiang Mai — you are experiencing more than just outrageously good flavor. You feel as if you are witnessing an intimate conversation with a mother and daughter that, no matter what separates them, is just as real as if they were cooking alongside each other in the restaurant's kitchen. It's a powerful feeling that makes Chiang Mai more than just an exceptional restaurant; it makes it a meaningful experience that we are privileged to witness.