The rotisserie chicken brand will open its second location this November 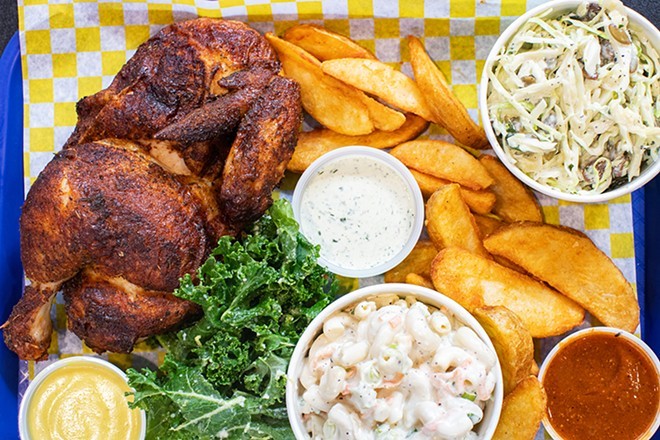 When Nate and Christine Hereford were sketching out their ideas for what would become Chicken Scratch (3700 Forest Park Avenue), they envisioned a small, standalone restaurant, ideally with a drive-thru, where guests could grab a rotisserie bird and some sides to take home for dinner. Now, after a successful year-long run inside the Food Hall at City Foundry, those plans are coming to fruition with the announcement of their second location at 9900 Manchester Road in Glendale. The new restaurant is slated to open this November and, according to Nate Hereford, will build upon their brand with new specials, menu items and a more robust catering program.

"Our original vision was actually to have something like what we are going into in Glendale," Hereford explains. "We were always looking for somewhere like this, but then COVID happened, and it caused everyone to reassess life. The opportunity with City Foundry happened, and it was too good to turn down. We basically did a reverse process and started with a satellite location inside a food hall, but once we got in there, it became a testing ground and a catalyst for us to see how we could grow more."

The forthcoming Chicken Scratch will be located near the intersection of Manchester and North Berry Roads in the storefront that formerly housed the first iteration of Pi Pizzeria + Rico Mexican (Pi Rico opened its original location in the space in October of 2020, then moved to a now-shuttered spot in Kirkwood ten months later). Comprised of an order counter, small seating area and drive-thru, the new digs will allow the Herefords to realize their vision for offering a high-quality, fast-casual option to those on-the-go — something he sees as being in high-demand in the current dining landscape.

"We are in an age where people order food online," Nate says. "I've been talking to other restaurant owners and operators, and they all say that most of their business is through order-ahead and pickup. This allows people to pickup their food and go on with their days, but it still gives them an option that isn't just going to the grocery store because that's easy. There is a time and a place for everything, and everyone is so busy that you go toward what is fast and easy and accessible, but people are willing to pay more for good food that has a little more effort in it."

Nate is excited for the opportunities to expand on his success at the new space. Though the rotisserie chicken, chicken sandwich and Scratch sides that have become synonymous with the brand will all carry over to the Glendale location, he and his team will be able to offer additional sandwiches, specials and even snacks and appetizers. He and Christine are also working on getting their liquor license and are grateful for the Pi Rico folks for laying the foundation for to-go cocktails at the storefront. They also see the new location as allowing them to expand their catering and larger format "party pack" offerings and are looking forward to welcoming people into the space for a more cozy dinnertime experience.

"This just allows us to open up the concept a little bit more than what happens at City Foundry," Nate says. "The sky is the limit." 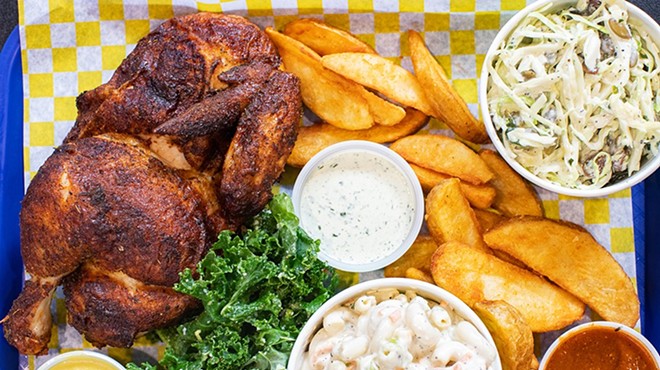 Review: Chicken Scratch's Rotisserie Fare Is Perfection of the Form