Chris Kelling of Pi Pizzeria in the Central West End: Featured Bartender of the Week

Chris Kelling doesn't mince words when chatting about the weather. "It was depressing," declares the Bay Area native, describing his first St. Louis winter. "By February I thought it would never end."

"I was the wine manager at a high-end restaurant in San Francisco, but I felt like there wasn't really anywhere to go from there, Kelling says of his move in November, which he undertook with his girlfriend, a St. Louis native. "Here I feel like I have a lot of opportunities to do something new."

He's particularly pleased with the atmosphere at Pi. "It's not like I came in and everyone had a routine already -- it was a new habitat for everyone," Kelling says. Everybody has their strengths and roles."

He also dove headlong into the St. Louis bar scene, putting in one night a week at Taste by Niche, manning the bar for Ted Kilgore.

In three words, how would you describe your bartending style? Fast. Efficient. Fun.

Favorite drink to drink? Wow, that's a hard question. If I had to pick one, it would be a well-made whiskey sour. 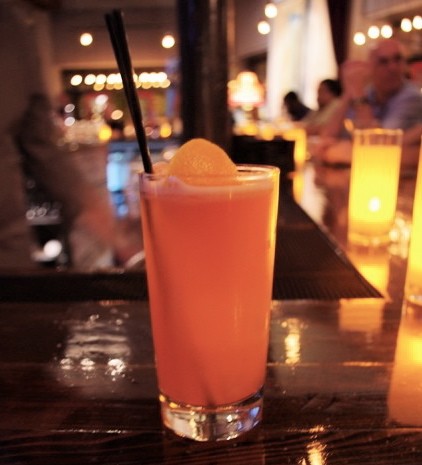 Drink you hate making? If I tell you, there's bound to be someone who will come in and order it just to try to get under my skin, so I'll abstain. I will say that I don't mind making mojitos, as long as we have mint.

What makes you ignore a customer at the bar? When people are on their cell phone, I assume they are having a more important conversation than the one they would have with me if I were to approach them; I'll let them finish and then greet them. If you tip poorly or are just an ass, I won't ignore you because then you've won.

Best/worst song on the jukebox? I think the music should match the mood of what is going on the bar at that moment. If it's a weekend night and the place is lively, nobody wants to listen to Radiohead -- it's not a coffee shop, it's a bar. If we have a full bar later in the evening, I like to put on James Brown and let people have the fun they came to have.

How do you keep yourself occupied on a slow night? All of the other bartenders here at Pi are awesome, so it's almost like hanging out with friends. So on slow nights we just make each other laugh and tell stupid stories.

How did you get your start? I was waiting tables in my hometown of Walnut Creek, California, and I was twenty. As my 21st birthday was approaching, I told my bosses that they needed someone like me behind their bar. They agreed and promoted another server -- a guy named Dave -- who they told me was like me, but ten years older and more mature. They promoted me a few months later, though. Who would you most like to have a drink with? Tina Fey, but my girlfriend might get upset, so I'll go with Bill Clinton. Maybe it could be in a group setting with my girlfriend, Bill Clinton and Tina Fey and for whatever reason my girlfriend and Bill Clinton both had to leave early....

Where are you most likely to be found when you're not in this bar? I just moved here in November and we don't really go out too much. If I'm not working, I'm usually at home, at the gym or at Whole Foods.

Best hangover cure? The whirlpool at my gym, along with a steady supply of Gatorade.

Worst pickup line you've ever heard? I hate when women ask, "What kind of car do you drive?" Even if it's not directed at me, I usually chime in and answer, "I drive a kidnapper van with no windows," and then give them a creepy look.

Most unusual liquor you've ever seen? A friend brought home some liquor from Asia that is a neutral spirit like vodka or Everclear, but they put a snake skeleton in it. I lived to tell about it, but I wouldn't try it again.

If you could start a band, what kind of band would you start? Either an '80s cover band where we lip-synch or a boy band. I love to dance but can't really carry a tune.

Best/worst drinking holiday? Worst is St. Patty's, Halloween, New Year's Eve, etc. Lots of amateur drinkers come out and try to relive their college days. Best drinking holiday? Super Bowl Sunday. I'm always off and I make sure there is a designated driver in the house.

Biggest tab you've ever seen? I worked at a pretty high-end place in San Francisco where four-figure tabs were not uncommon. I have yet to see a five-figure bar tab, though. I want to party with those people -- wherever they are.

Drunk food of choice? I have a sweet tooth like you wouldn't believe. If I've had my fair share of booze and there are cookies in the house, they won't be around very long. Matt Seiter, the bar manager at Sanctuaria, has told me about something called a slinger at Courtesy Diner that he swears is the best drunk food ever. I really want to try it, but getting drunk to enjoy greasy food really isn't something that's on my calendar.

If you know of a bartender who's deserving of a profile, e-mail [email protected]